If you’ve ever walked down Cary Street in Shockoe Slip and wondered about the towering spire next to the Marriott, you might not have realized that you were standing on hallowed ground.

The 27-foot spire and limestone wall behind it, etched with the enacting paragraph of the Virginia Statute for Religious Freedom, fronts the Valentine First Freedom Center, on the corner where the General Assembly met during the American Revolution.

Thomas Jefferson drafted the statute and it was enacted in 1786. Nothing short of revolutionary, the document paved the way for the First Amendment to the U.S. Constitution and still impacts how the entire country views the free exercise of religion to this day.

And it feels especially relevant in today’s climate. A recent New York Times piece noted a coming report from the Center for the Study of Hate and Extremism at California State University, San Bernardino, will show anti-Semitic hate crimes are at an 18-year high in the nation’s three largest cities: New York, Los Angeles and Chicago.

The Valentine museum took over stewardship of the First Freedom Center in 2015. Valentine Director Bill Martin said then that doing so added to the wealth of historic resources available to residents and visitors and provided another venue to tell the evolving stories of the city. Across the nation, events are held to commemorate Religious Freedom Day on Jan. 16. 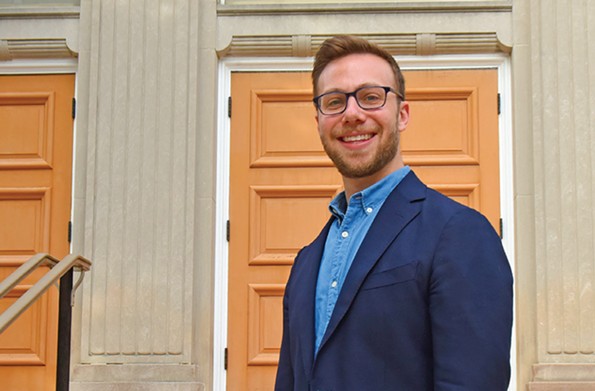 For the second year, the Valentine First Freedom Center is holding a Religious Freedom Day Celebration and welcoming members of the public, religious leaders, advocates and organizations to celebrate the freedom of conscience that was enshrined in the Statute for Religious Freedom, as well as how those words continue to inspire our community today.

According to Martin, the day is about fellowship with people from all walks of life and different faith traditions who are united in their abiding belief in the importance of religious freedom. The event will feature words by Rabbi Michael Knopf of Temple Beth-El, along with a musical performance and a reading of excerpts of the statute delivered outside by the spire.

“This year’s event is especially poignant, as we gather to engage in important dialogue about the rise of violence and vandalism directed at members of the Jewish faith and other religious minorities and how we can respond as a community,” Martin says. “Rabbi Knopf will speak about the rise of anti-Semitism nationally and his own experiences locally, what we can do as a community and, indeed, what role the First Freedom Center can play to push back against this form of bigotry.”

Foundational to Knopf’s faith is not only that human beings possess infinite dignity, equal worth and collective responsibility, but that human diversity testifies to God’s greatness. He sees religious liberty as enabling people to be who God intended them to be.

“Additionally, the Jewish people know all too well the horrific and devastating consequences of living as a minority in countries that did not guarantee religious liberty,” he says. “As a rabbi, I am committed to ensuring that not only will such suffering never again befall the Jewish people, but also that no other person or group will be oppressed because of who they are or what they believe.”

While the Valentine First Freedom Center is invaluable as an educational space, Martin also sees it as a place to consider the impact of religious freedom and freedom of conscience in 2020 and consider where we’ve fallen short, where there’s more work to do and how interfaith dialogue can strengthen this freedom: “At a time when we are seeing increased attacks and vandalism perpetrated against religious minorities, the First Freedom Center can serve the community as source of unity, collaboration and resolve,” he says.

Both Knopf and Martin acknowledge the reality that people all over are being targeted, marginalized, attacked and oppressed for their differences.

“This celebration is an opportunity to remember the preciousness of religious liberty and the beauty of diversity,” Knopf stresses. “I hope it will inspire us all to recommit ourselves to honoring each others’ differences, and preserving, protecting and defending each others’ rights.”