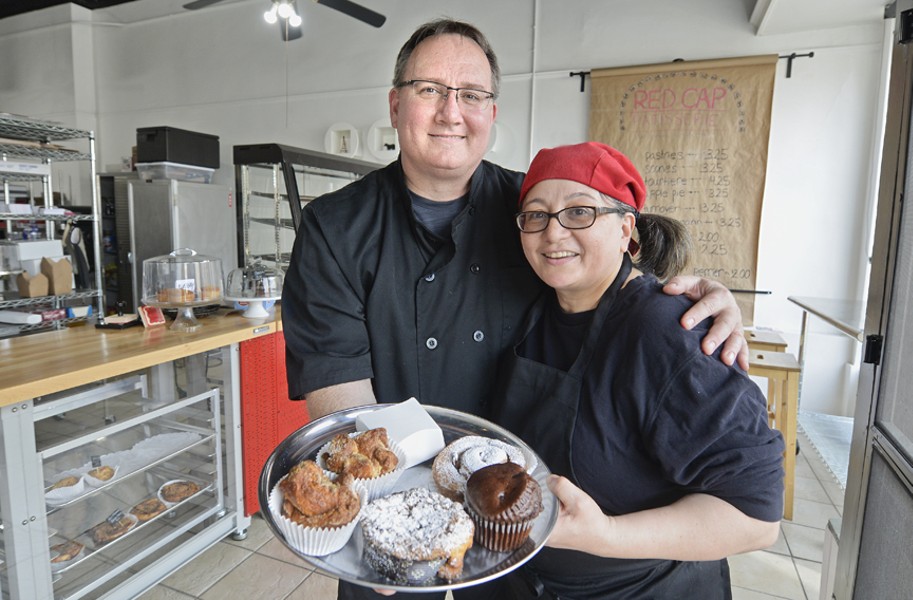 Ash Daniel John and Martine Wladar are offering a creative take on French and European pastry at Red Cap Patisserie.

The French believe that they make the best food in the world, and chefs there — and here — are trained to follow their traditions strictly. That doesn’t mean all of them do, but there’s pressure to keep French food precisely French — no changes.

Given France’s history, it seems a little incongruous. Although we focus on the American Revolution as the most spectacular thing to happen to democracy since it was a twinkle in ancient Greece’s eye, our conflict with Britain was more like a blip. The big, transformative historical event that pushed most countries in the Western world toward democracy was the French Revolution.

OK, history lesson over. That wasn’t so painful, was it? It also gives you a little insight into exactly what might be happening behind the door of Red Cap Patisserie in the old Lucille’s Bakery space on Meadow Street. The logo’s red hat — or bonnet rouge — was worn as a symbol of liberty during the French Revolution.

“We want to make a product we like,” bakery co-owner Martine Wladar says, emphasizing the word “we.” Along with her husband, John, she’s producing French pastry that’s not exactly French — the technique may be there, but the ingredients and flavors are a little different than what you might expect.

Tourtières are a perfect example. They’re French Canadian meat pies, and Martine makes them with ingredients such as pork, plums and pears, or chicken, bacon and peas instead of the traditional ground meat and potatoes. Not French, not Canadian, but a different kind of flaky little pies that Richmonders can eat on the go.

The Wladars recently moved to town from southern New Jersey near Philadelphia. “We fell in love with Richmond immediately,” John says. “We didn’t know what to expect, but we’re so impressed with the food, the art — the cultural diversity.”

Martine interned at Le Cirque with famed pastry chef Jacques Torres after culinary school. “I went in the first day without the full uniform,” she says. “They sent me away with a roll of Saran Wrap, and I had to use that to hold up a giant pair of pants in order to go back to work.”

She chooses her own uniform now — a black chef’s jacket and a soft red cap reminiscent of her store’s logo. After years of catering in Manhattan for clients who included Martha Stewart, she learned an important lesson, she says: “Make it happen.” No matter what.

And that’s the spirit that infuses Red Cap. The couple started out selling Martine’s wares at the Farmers Market at St. Stephen’s — pastries she made in her kitchen at home. She’d tricked out the small space with professional restaurant equipment and was able to turn out a surprisingly large quantity of goods. The Lab at Alchemy also sold Martine’s pastries, but as her husband says, “When this space came up, it was now or never.”

As I talk to the Wladars, neighbors walking by call through the screen door to find out when the shop will open. Since Lucille’s closed, the neighborhood has been bereft. For Martine, it’s an exciting opportunity to establish her own place in Richmond.

“I like [to make] cake because it goes away,” she says. “[Baking] is really performance art.”