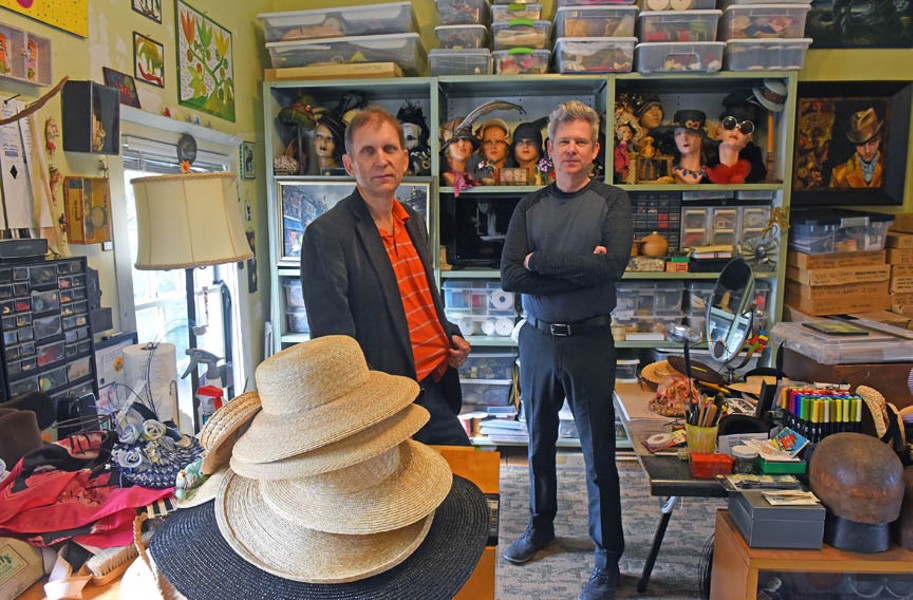 Scott Elmquist Milliners Ignatius Creegan and Rod Givens have been earning some celebrity fans for their hats made the old-school way in Petersburg.

What do Steven Tyler, Demi Moore and Michael Stipe have in common? All of them own headwear from Ignatius Hats.

The millinery business operates in the 1855 Thomas Wallace House in Petersburg, where an engraving in the foyer commemorates the April day when Lincoln and Grant met there to discuss ending the war.

Home, showroom and workplace to milliners Ignatius Creegan and Rod Givens, it’s also a bit of a museum with shelves of vintage hat blocks in wood, plaster and aluminum lining basement walls. Using wheat straw or synthetic braid, plaits are sewn on one of the many antique machines designed specifically for the task and placed on hat blocks to determine the hat’s formal shape. Finally, Givens uses ribbons, feathers, bows and flowers to trim each individually.

Hats initially spoke to Creegan because they offered comfort.

“I had a cold studio at the old Richmond Dairy in the winter of 1985, so my first hats were warm,” he recalls of a time when there were no working milliners in Richmond. “It was an art form that’s very expressive, but culturally forgotten.”

A lifelong hat fan, Givens joined the business in 1994. “I have a photo from when I was 5 wearing a suit with a fedora. When I started making hats, I was drawn to the hand sewing. Spending time carefully sewing trim down while listening to music or podcasts is relaxing and enjoyable.”

Their first Smithsonian Craft Show netted them an honorable mention, and they’ve participated in dozens of others since, including the Philadelphia Museum of Art Craft Show and San Antonio’s Fiesta Art Fair. Next up is a trunk show at the Virginia Museum of Fine Arts.

In between, they and their apprentices have crafted hats for movie, stage and television, including HBO’s “John Adams,” Fox’s “Sleepy Hollow” and “Glee,” and Meg Ryan’s “Ithaca.”

“While they’re really the designers, I find it challenging to interpret their designs, figuring out how to make their ideas work,” he says. “I like creating a piece from a historical period that looks like a real hat made with needle and thread, one stitch at a time.”

Part of their goal is creating styles for everyday wear — hats for golfing, pool or beach, or just sun protection — but also special-event finery. Guests wearing fascinators at Prince William’s wedding caused an immediate spike in interest for the highly decorative hat alternatives at weddings and evening events. For the Kentucky Derby, a selection of hats is designed specifically for race day and accompanying events.

Occasionally, even a superhero needs an Ignatius hat. At a Northern Virginia show, a woman chose a wide-brimmed black and natural straw hat, asking for it to be wrapped for pick-up later. Afterward, another exhibitor ran over to share that the woman was Lynda Carter. When she returned for the hat, Givens gushed about how much he’d loved her in “Wonder Woman.”

“Smiling and thanking me,” he says, “she took her hat out of the box, put it on and walked away looking wonderful!” S