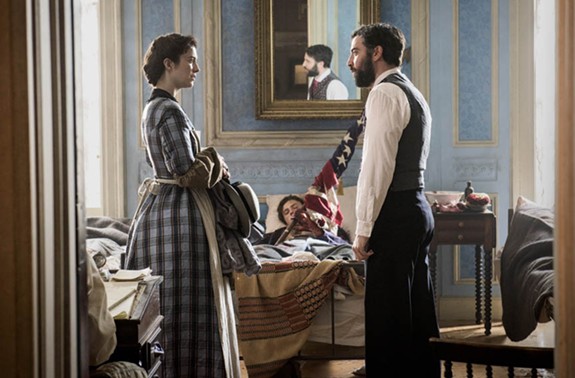 As soapy period drama "Downton Abbey" prepares to exit the airwaves this spring, PBS hopes the Civil War hospital drama “Mercy Street” can follow in the show's footsteps and keep the network a prime-time viewing destination in a television golden age.

Shot in Richmond and Petersburg, this is PBS’s first American-produced drama in more than a decade. The story is set in Union-occupied Alexandria during the Civil War, centering around New England abolitionist Mary Phinney (Mary Elizabeth Winstead) and Southern belle Emma Green (Hannah James) working side-by-side as nurses in a hospital that was recently converted from the Green’s family mansion.

The idea was conceived by Lisa Quijano Wolfinger, whose production company, Lone Wolf Media, has produced Emmy-Award-nominated documentaries on topics as diverse as the Mayflower, the Salem witch trials, and the Age of Discovery. Wolfinger originally developed the project before the 150th anniversary of the Civil War.

Wolfinger, who co-produced "Mercy Street" with Scott Free Productions, partially based her project on Louisa May Alcott’s short story “Hospital Sketches” that strikes a balance between humor and sediment in recounting her experiences as a volunteer nurse.

Although the series is written by former "E.R." showrunner David Zabel and uses "The Knick’s" Dr. Stanley Burns as its medical consultant, the show’s producers do not see themselves as a competitor to other medical dramas on the air.

“I don't think we're a medical drama,” Zabel says. “[The Knick]'s much more intensively about the medicine and that's one of a lot of the issues that we're touching on.”

The show's expanded ensemble also features Gary Cole (“Office Space”) as family patriarch James Green, Wade Williams (“Prison Break”) as a conniving hospital steward and Josh Radnor (“How I Met Your Mother”) as a surgeon with a conflicted heritage.

Crucial to the story is the setting of Alexandria as the sort of conflict-infused melting pot that comes from being situated along the Union-Confederate border.

In addition to telling the story of nurses and doctors on different sides of the conflict, the show’s expanded ensemble includes three African-American characters at various stages of freedom: L. Scott Caldwell plays a family servant coping with her newfound freedom; McKinley Belcher III plays a hospital laborer with a secret knowledge of medicine, and Shalita Grant (“Bones”) plays a contraband, a slave newly possessed by the Union.

In a recent panel discussion, documentarian Ken Burns commended the producers of "Mercy Street" for having "taken an African-American narrative that is vulcanized and put off to the side, as if they are mere passive bystanders, and not active and self-sacrificing soldiers and these characters are so fully realized.”

While the show is set in Alexandria and is partially sponsored by the city’s member-based tourism organization, Visit Alexandria, traffic considerations sent the production southward. Richmond’s historic Laburnum house and Petersburg’s Center Hill mansion were the two main locations used for the production.

“Richmond is authentic -- history happened here and has left behind a kind of truth that cannot be fabricated. In addition to realistic locations, Richmond has historians, museums, re-enactors and craftspeople as well as the talented and experienced pool of artists from the VCU School of the Arts, all of whom are dedicated to interpreting actual events and keeping them alive for future generations,” Nelson said.

Other productions that have recently filmed in Richmond include the Academy Award-nominated “Lincoln,” Meg Ryan’s directorial debut “Ithaca” and the upcoming Daniel Radcliffe film “Imperium.”

Nelson cites the work of Gov. Terry McAuliffe, State Secretary of Commerce Maurice Jones, and the General Assembly in building up Virginia’s reputation as a prime destination. In addition to filming in the state, the production also took time to immerse itself in the historical locations with on-site visits and enlisted Alexandria Black History Museum Director Audrey P. Davis as a historical consultant on set.

For Winstead, the experience allowed her to reconnect with her roots. Although she confesses, “I didn't learn anything more about the Civil War than what kids learn in school,” the North Carolina-born and Utah-raised actress recently discovered through her parents’ genealogical searching that she had Civil War roots. Winstead, whose previous experience in period dramas includes playing Mary Todd Lincoln in “Abraham Lincoln Vampire Hunter”, was drawn to the project on the basis of the script.

“I'd never seen a Civil War story told entirely from the points of views of these types of women,” Winstead says. For Hannah James, shooting "Mercy Street" was a welcome homecoming. James grew up in rural Virginia near Culpeper before studying acting in England.

“Coming back to my backyard [where I was] raised a little girl on a farm . . . .was a treasure,” says James.

Ultimately, Wolfinger and PBS hope that “Mercy Street” will not just be a historical statement but something in the present.

“Our series deals with some of the same issues we're wrestling with today whether its sexism or racism or polarizing politics,” she says.