Preview: My Noodle & Bar Gets a Playful Revamp 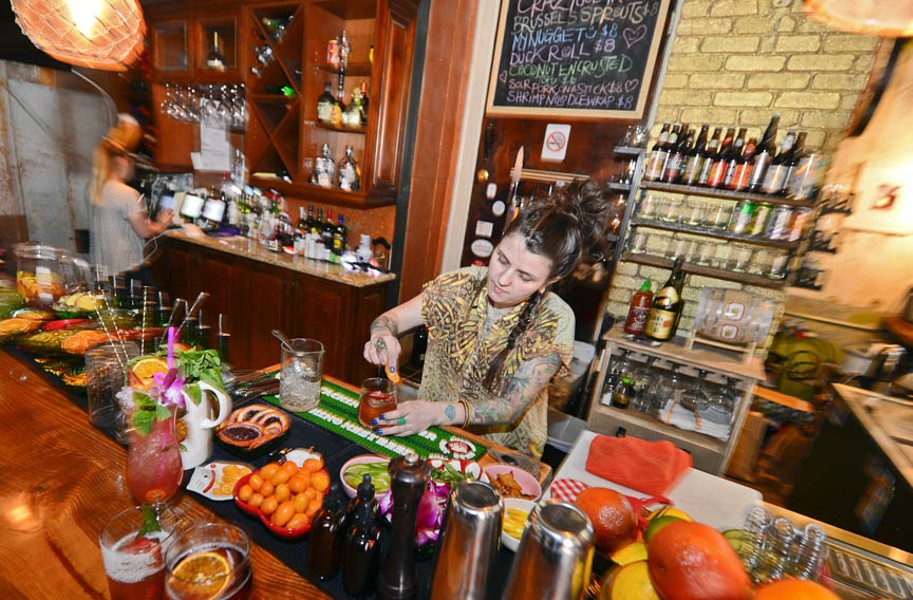 Along with the interior, the bar program at My Noodle & Bar has undergone a makeover. General manager Madison Pere makes culinary-inspired concoctions aided by a smoker and a Sno-Cone machine.

Whitney Kiatsuranon was driving on the Powhite Parkway when someone in a small truck cut her off. She was furious.

“Technically, I wasn’t following him because we were going in the same direction,” she says. “But I found out where he worked.”

It turned out the driver worked in Carytown at Mom’s Siam, only a block away from where she lived. “I yelled at him — but he was really cute,” she says. Five years later, she and Joe Kiatsuranon married and now have two children.

Although Joe grew up cooking with his grandmother and aunt in Thailand and working in the family restaurant in Richmond, he wasn’t sure if he wanted a career in the business. He tried real estate instead for a while and was successful, but after the birth of the couple’s first child, he realized that it wasn’t what he wanted to do with his life.

“I wanted to focus on a restaurant and make it the best,” he says. “I’d worked for my mom and I wanted people to see what I do.”

My Noodle & Bar, in the bottom of the Stuart Court apartment building at 1600 Monument Ave., was his first venture, opening in 2013. His second, along with partners Jason Lough and Brandon Pearson, was Sabai on West Broad Street. He left My Noodle & Bar last summer to get the kitchen up and running there.

When Joe came back to the Monument Avenue restaurant in the late fall, he realized that the place needed a makeover. Although the Kiatsuranons had opened a patio the previous summer, it wasn’t enough to give the restaurant the playful vibe that Joe envisioned. The couple felt it had been forgotten about.

Over 11 days in December, the restaurant closed. Joe started constructing what he calls treehouses — high, semienclosed booths — out of reclaimed wood that came from a barn dating from 1894. The distressed plaster walls got a sheen of gold sparkle that contrasts metal from an old roof atop a building in Church Hill, and a porch swing — inspired by his children — makes up the seating at another table.

“Everything I’ve built has a lot of stories [behind it],” says Joe.

The bar menu received a revamp as well. Madison Pere, previously at Sabai, is now general manager and draws on her past experience cooking at Can Can Brasserie for culinary-inspired cocktails. Her latest obsession is the new Sno-Cone machine that sits at the end of the L-shaped bar.

I try a tall, icy, blue-topped drink in a curvy glass laden with rum and garnishes worth eating — a spicy, candied dehydrated wheel of orange and a spiky slice of star fruit. “I have to hide them when I’m not here,” Pere says. “People eat them up.”

Joe Kiatsuranon and Pere also plan to cook together. They’ve created a French-Thai mash-up of Sunday brunch — the one day that parking is available on both sides of Monument Avenue — with things such as Thai chili black cherry sauced scallion crepes with roasted duck.

Right now, My Noodle & Bar does a lot of takeout business. That’s fine, but the new interior, the new bar program and the new brunch have a different aim, Joe says: “I want people to stay.”