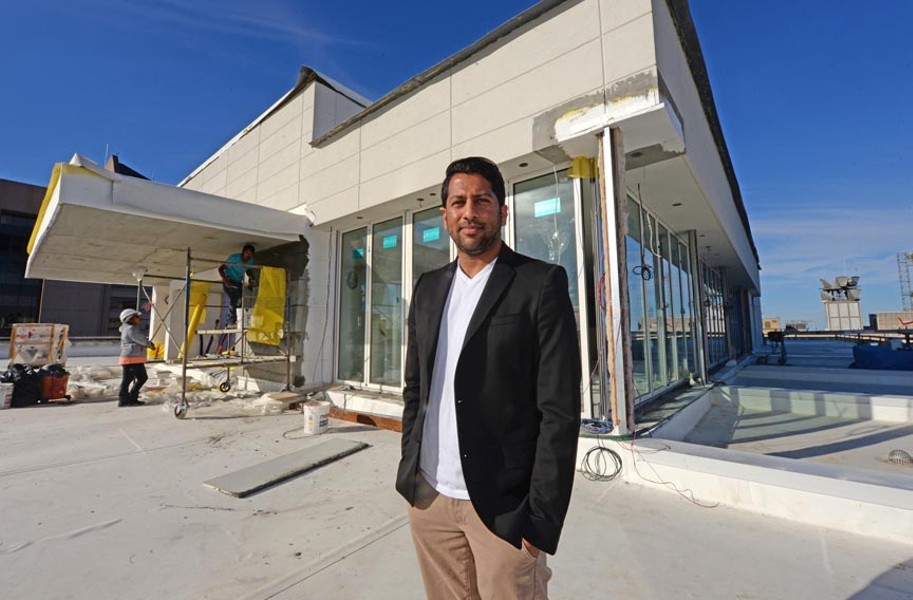 Sean Rapoza, general manager of Kabana Rooftop, smooths the jacket of his trim, gray suit. Things aren’t going as planned. The key to the elevator that will take us up to check out Richmond’s latest rooftop bar is hard to track down, but eventually, Rapoza gets in touch with someone who can come down to give us a ride.

Twenty floors up and the view is, as expected, spectacular. Kabana will open on top of the former office building located at 700 E. Main St. You’ll find Homewood Suites there now with an entrance on Seventh Street; Belle & James, a restaurant with doors on East Main Street; and soon, a Hampton Inn & Suites that also will have its entrance on Main. Both the restaurant and rooftop bar are owned by Washington restaurateur Kunal Shah.

Kabana is still under construction, but the bar itself, looking like a long, stretched-out pentagon, is now in, dominating the space. Both Rapoza and chef Warren Jones are excited — it’s finally starting to look like a restaurant. The deck outside wraps around the indoor space on three sides and will have long couches, tables and a set of actual cabanas lined with banquettes and draped in curtains that can be pulled shut for privacy. Behind them is a small, 3-foot-deep pool.

“It’s not a lap pool,” Rapoza says. “It’s mostly for ankle-dipping.” A 10-foot glass wall will line the edge of the outdoor space for safety.

Tiki cocktails are huge right now, says Rapazo, who recently returned from the Nightclub and Bar Convention and Trade Show held in Las Vegas. “To me, it’s a backlash against the stirred, boozy, bitter drinks — you want something that’s fresh and vibrant.”

At Kabana, the bar will use ingredients such as fresh coconut milk, fresh pineapple and other fruit, plus a deep selection of rum varieties. “There’s just not enough presence of that in the city,” he says.

Jones plans a menu of international street food — things that can be held in one hand while you have a cocktail in the other, Rapoza says. Although this will include masa tots — a Mexican version of gnocchi that uses corn instead of potato — and aloo tikki — Indian potato puffs — Jones, who trained under L’Opossum’s David Shannon at both Helen’s and Dogwood Grille & Spirits, has big plans for other dishes.

“I want to be able to execute a fair amount of unique techniques,” Jones says, “like molecular gastronomy kind of stuff.”

He’s working on a vegan oyster made from pureed sea beans and oyster mushrooms that will sit atop a “shell” made from a classic vinegar mignonette. The whole thing can be eaten in one bite. I pretend to understand how that will be accomplished — I don’t understand how TV works either, but I still managed to watch the entire season of “House of Cards.” I’m ready for a vegan oyster.

I’m also ready to recline outside above the city in a cool, black, gray and white space while gazing at the river, drink in hand. If all goes as planned — and there were plenty of hard hats hammering away when I visited — we’ll all be able to feel the sweet Virginia breeze on our faces by April, weather permitting. kabanarooftop.com.