The new VMFA exhibit helps a lifetime film buff get to heaven.

You walk through what appears to be the back lot of a movie studio; the two-by-four construction secures hemmed sheetrock with stenciled points, and you suspect there’s a beautiful movie set just on the other side. You leave the pedestrian and enter a deep, dark netherworld lighted with the colorful apparitions of Susan Hayward, Audrey Hepburn, Vivian Leigh and Ginger Rogers swarming around you.

If you love fashion, costume design, movies or movie stars, “Hollywood Costume” at the Virginia Museum of Fine Arts -- which opens Saturday, Nov. 9, and runs through Feb. 17 -- is a bacchanalia like none you’ve ever attended. It’s the only East Coast showing of the Victoria & Albert Museum’s groundbreaking, exhaustively researched exhibition honoring the artistry, mastery and methods of Hollywood’s greatest costume designers. For this lifelong film buff, the immense, beautifully lit exhibit is breathtaking, fun and exciting.

Many of the most iconic Hollywood characters are here. The costumes are the ones worn by the original actors in their roles; on only two occasions did I see a reproduction inserted -- most notably, Dorothy’s ruby slippers from 1939’s “Wizard Of Oz,” though they were constructed from the legendary Adrian’s original MGM drawings and instructions. Dorothy’s blue checkered farm dress is the real thing though, and right next to it is the Wicked Witch’s pointy black felt hat.

Look! It’s Marlene Dietrich’s tuxedo from “Morocco” (1930). Did I mention Keira Knightly’s green dress from “Atonement” (2007)? I fell in love with Knightly in that dress. John Wayne’s dusty red shirt, suspenders and chaps from “The Searchers”? Get out of here! Also included are two of the most sexually iconic costumes in film history: Marilyn’s white crepe “subway grate” dress from “The Seven Year Itch” (1955) and Sharon Stone’s short dress suit from “Basic Instinct” (1992) mounted in an appropriate -- or should I say -- inappropriate manner.

For some, this exhibit will bring out the wonder you first felt at the movies as a child. Most exciting for me is the cape worn by the evil Ming the Merciless (actor Charles Middleton) in the 1938 serials “Flash Gordon’s Trip to Mars.” The childhood in which I first encountered this favorite bad guy seems as long ago as ancient Rome. Speaking of, historic epics are well represented: two dresses worn by Claudia Colbert in 1934’s “Cleopatra,” Charlton Heston’s clothes from “Ben Hur” and Russell Crowe’s battle armor from “Gladiator” (2000). There’s interesting information provided about the elegant costumes worn by different Queen Elizabeths played by Bette Davis (twice), Glenda Jackson and Cate Blanchett, as well as John Truscott’s designs for Vanessa Redgrave’s Guinevere in “Camelot” (1967). 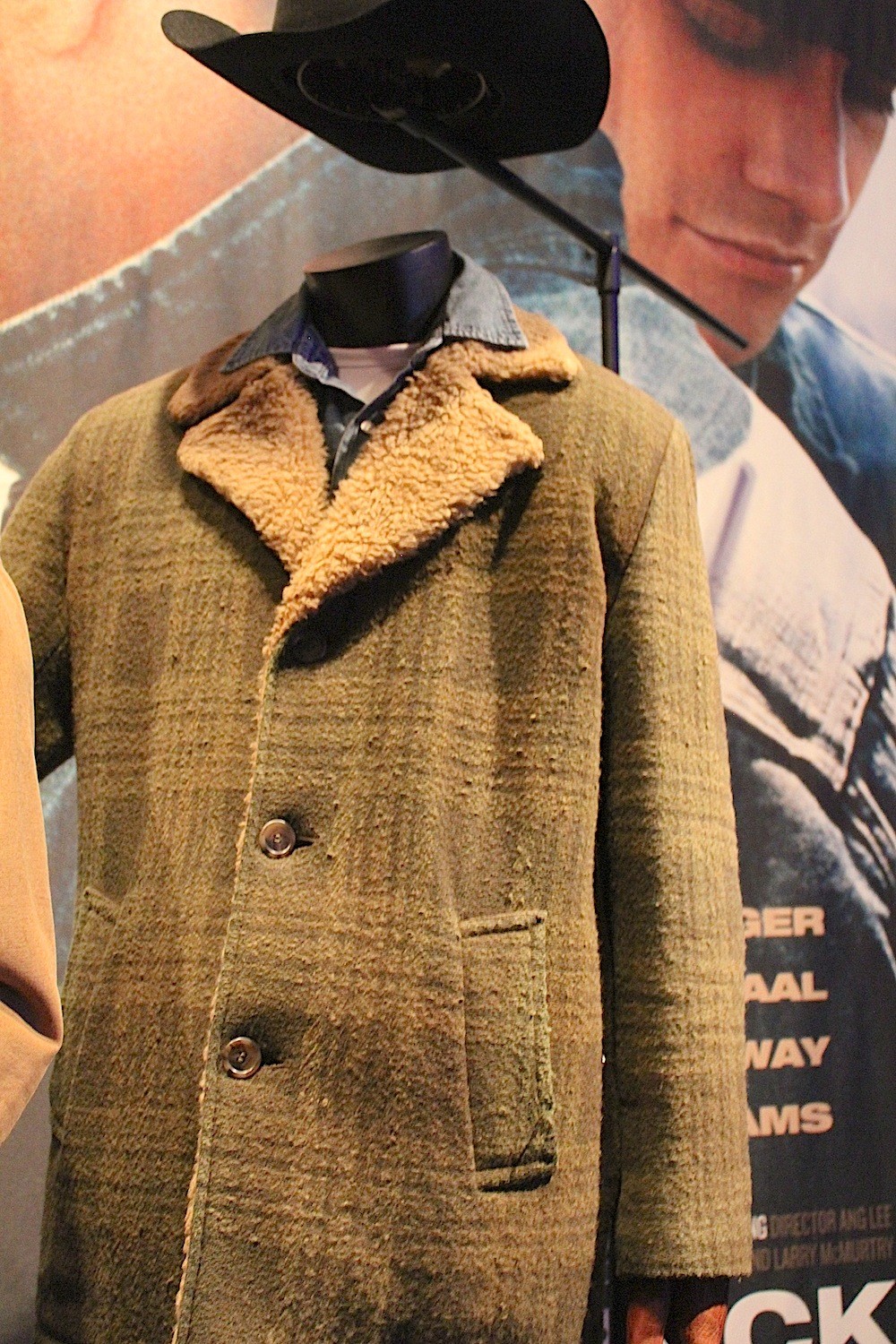 Each costume is accompanied by quotes from the designers or actors. Video screens hang everywhere with scenes that give context to the costumes’ creation and meaning. Many costumes are accompanied by videos of the principals in conversation -- costume designers, actors or directors including Tim Burton, Tippi Hedron, Edith Head, DeNiro and Meryl Streep.

Below these screens are tables with sculpted items and shapes that would be all white if not projected with changing images from an overhead projector. One table represents Mrs. Lovett’s flour-rolling surface from “Sweeney Todd Demon Barber of Fleet Street” (2007). A large, wooden rolling pin magically turns into Todd’s striped-red barber pole as Burton and his designer, Colleen Atwood (on separate screens but obviously hearing each other in real time) discuss how Johnny Depp likes to find his character in his clothes. Another table represents what would be Edith Head’s workspace -- with overturned late-night wine glasses -- while she, Hedren and Hitchcock discuss “The Birds” (1963). Of note, Hedren will be in town Saturday to show “The Birds” at VMFA. You can see the pages of a book turning to different stages of her costume’s design and learn how a pile of test Polaroids transforms into a piece of cloth pattern. Next to Hedren’s famous suit costume -- which is posed in horror -- are eerie silhouettes of evil crows gathering on a playground jungle gym across a phalanx of video screens. A nice touch.

Like the Picasso, Chihuly and Wesselman shows that preceded it, just when you think it will end, another room of treasures appears around the corner. Expect to spend a long, leisurely time, or come back. This show is exhausting in the best sense of the word.