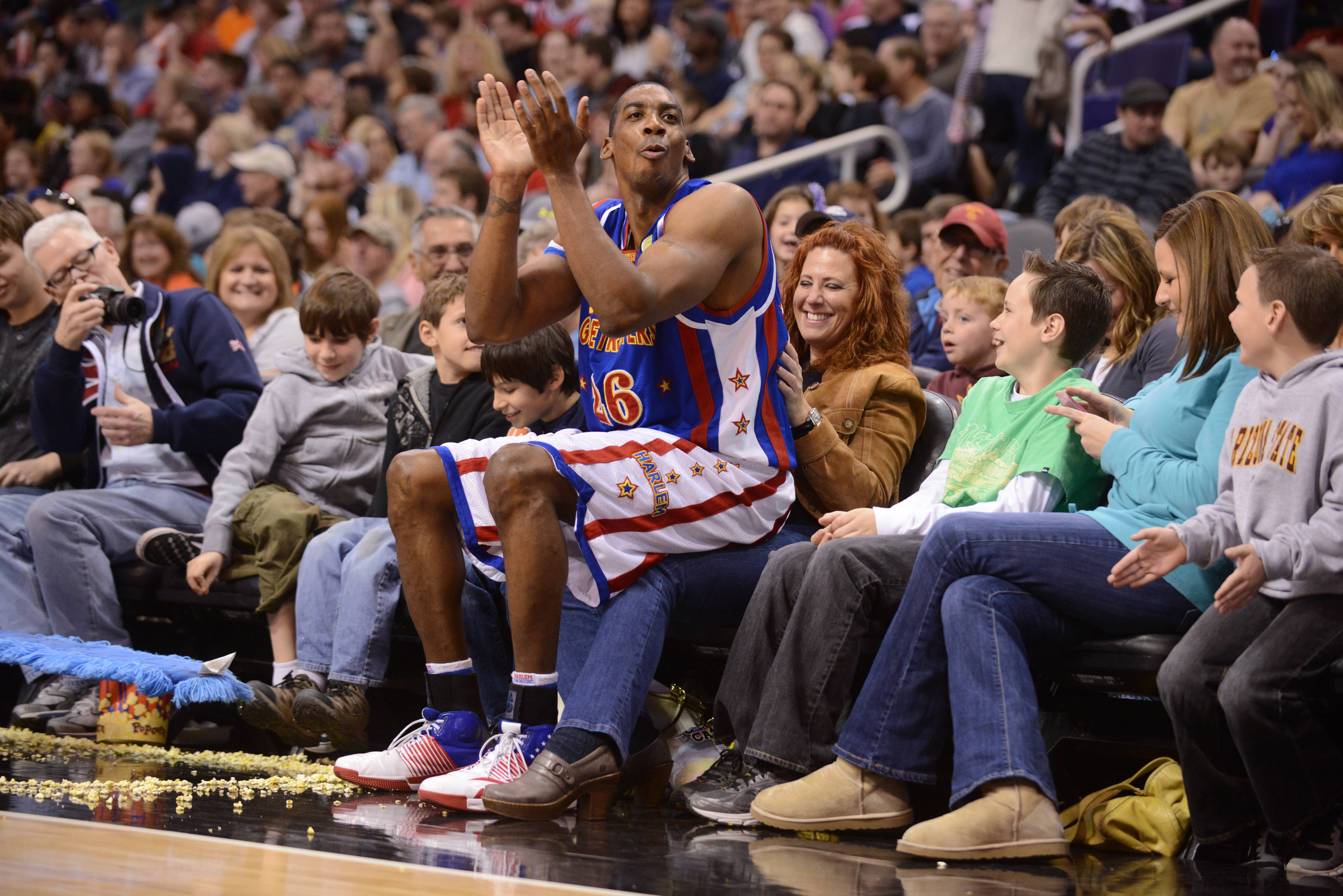 He’s the towering former NBA player who is the ringleader for the world’s most famous basketball team, the Harlem Globetrotters, providing family entertainment and making it look easy. “Hi-Lite” earned his name for his powerful dunks and unorthodox passes, but he’s also known to draft players from the audience, tease referees and use a fan’s jacket if a towel isn’t handy.

Kris “Hi Lite” Bruton, a native of South Carolina, spoke about playing with Michael Jordan, almost setting a world record and the importance of being happy from the team bus on the way to Tuesday’s game at the Richmond Coliseum.

Style Weekly: Describe your role with Globetrotters on the court.

Kris Bruton: My role on the court is to make the fans laugh. I’m the showman on the court, and I’m the entertainer. I’m the Meadowlark Lemon of the team. That’s my specialty, just to have fun and to interact with the crowd, make sure they have a good time.

Are there times when you don’t feel like entertaining?

There’s times that you don’t feel like it, but the fans will never know. This is my job, I take pride in it and I love playing basketball. So when I’m out there on the court, that’s my haven. After it’s over, I’m Kris again. But on the court, I’m Hi-Lite and Hi-Lite never gets tired.

I read that you tried to set a world record for the tallest dunk (on a 12”1’ rim) but it was determined to be illegal.

Yeah, that’s right. That was in Bermuda, some years back. We were outside of Bermuda, on concrete and I had a few passes that were bad passes, and I finally got a good one and I dunked it with two hands. I don’t know where the illegal part came in, I’m still debatin’ that one. I thought I cleared the dunk, the judges said it was illegal, maybe ‘cause I didn’t hang on the rim or somethin’. But I knew I could do it and that’s something that I will always carry with me, that I was able to get that high and dunk the ball with two hands.

There was incident recently where a blackboard collapsed on a player after a dunk. How’s he doing?

I was there. His name is Bull. Bull Bullard. We were in Honduras and what happened was, when he dunked it, the whole thing came down, the whole backboard came down. It was unexpected. But I told Bull this, he’s such a great athlete that I don’t think anyone else, a normal human being, would not have been able to escape the danger of a backboard falling down. I take my hat off to that guy, he’s a super athlete and he’s doing fine.

Speaking of super athletes, tell me about playing with Michael Jordan.

I played with Michael Jordan back in 1994. When I was drafted by the Bulls he was in baseball at the time, but he was coming back. I had the experience to play and learn from him, it was great experience.

Did he talk a lot of trash?

[Laughs] Yeah, he did talk trash. During practice he didn’t really talk a lot of trash. He was encouraging, “Good shot, Make your shot,” stuff like that. That what I learned from him, you can push the right way, instead of tearing down someone.

How long do you think you’ll be globetrotter?

You know what, I can do this forever. I’m not looking for a retirement day. Just like Kobe [Bryant] he’s not looking to retire, but he’s getting hurt. So he may have to. Players who really love what they’re doing, they don’t look for an ending; they want to go on forever.

Since you mentioned the NBA, what do you think is wrong with the Eastern Conference this year? Only three teams have winning records.

I just think there is a lot of talent out there, and you have to have chemistry. Of course, it helps to have some of the greatest players in the world on one team, to help win, but at the same time, you have to get what fits for your team. I don’t know if the owners are doing that … I’m not into the business side of it.

I think sometimes guys get stuck in a long contract, guys are unhappy and that’s what makes for a bad team. So if you’re not happy, of course you’re not going to perform at your best. I think Indiana Pacers are happy. I think the Miami Heat are happy. Even when things are going wrong they’re happy.

Are the Harlem Globetrotters happy?

Yes, we’re happy because we win all the time. [Laughs]