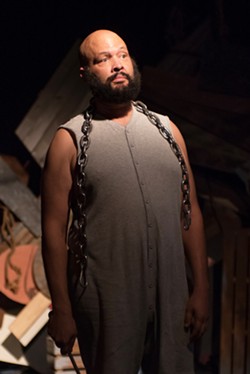 Twenty-four years ago, a decommissioned firehouse on Broad Street was transformed into a theater. This week, that building will be transformed again – albeit temporarily – from the Firehouse Theatre into the Yankee Doodle Circus, complete with carnival buskers, vaudeville performers, and numerous magic acts.

The centerpiece of this immersive makeover is a world-premiere original work by local playwright Bo Wilson called “Food, Clothing, Shelter.” Set in 1927, the play explores the titular necessities in three acts through a tale of circus performers whose train has derailed outside Vinton, Indiana, forcing them to negotiate with bewildered locals for essentials. “Vinton is a small town unprepared for a circus invasion,” says Wilson. “The play’s tension comes from townspeople responding to invaders they think of as ‘freaks’ and the performers trying to adjust to a narrow, small-town point of view.”

Wilson developed “FCS” as part of his current year-long stint as “Playwright in Residence” at the Firehouse and he knew from the start that Firehouse’s producing artistic director Joel Bassin was interested in what is called a “devised theater piece.” “Joel wanted a more collaborative give and take, where the playwright executes the text in consultation with other artists,” says Wilson.

The play also dovetails with Bassin’s on-going efforts to expand the Firehouse’s slate of productions beyond standard theater; offerings at the Firehouse now regularly include burlesque, comedy, poetry slams, and cabarets. Wilson explains, “We are making use of a lot of existing Firehouse relationships in this staging. Joel said ‘hey, we know lots of vaguely sideshow-y type folks’ so we’ve developed an energetic agenda of always having something on stage, even during the intermissions.” There will also be performers in the lobby and situated at other places throughout the building.

“The décor will extend beyond the stage so the whole theater will look like a circus refugee camp. The minute you walk into the building, it will feel like you’ve been transported to a different place,” says Wilson.

After more than 30 years as a working playwright, Wilson has emerged at the forefront of efforts to develop new work in Richmond. Two of his plays saw regional premieres last theater season, “The Charitable Sisterhood Christmas Spectacular” at Virginia Rep last December and “The Boatwright” at the Firehouse this February. Considered together with high-profile stagings of David Robbins’ “End of War” at Virginia Rep and Jeremy Morris’s “The Top of Bravery” at Quill, last season may have been the high-water mark of original work produced in town.

Wilson is of two minds when it comes to Richmond’s ability to become a hotbed of new play development. “On one level, I’m a mercenary guy with a mortgage so, with my projects, I am very focused on what my audience is, what venue this would be appropriate for, who the lead actor could be. It behooves me to have something specific that I can hang my hat on,” he explains.

“In another part of my brain,” he continues, “I’m a citizen of the theater and I’m very aware of certain things my community can do. And I sense that there is a growing level of courage among local companies to say that producing new work is its own reward, even in the face of uncertainty. This is a far-sighted change.”

It’s the kind of change that he believes could lead to more residency-type relationships like his current situation with the Firehouse. “There is no doubt that this residency has helped me be more productive,” Wilson says. “There is support from the company but there is also expectation, people waiting for more pages.”

The support has also pushed him out of his comfort zone in the development of “Food, Clothing, Shelter.” “I’m not a daring guy. Forgive the pun, but writing this piece has been a little bit of a high wire act,” he says. “It’s been Joel and the working group at the Firehouse that forced me up on that high wire.”

“Food, Clothing, Shelter” runs at the Firehouse Theatre, 1609 W. Broad St., Sept. 6 – 17, together with a series of magic acts on other evenings. See details at http://www.firehousetheatre.org/yah.