There’s a delicacy to Edgar Zendejas’ soft-spoken syle. He’s not so much directing the Richmond Ballet dancers as he is teasing out an exchange of ideas between the group in front of him and what’s going on in his head.

Zendejas, who was born in Mexico, first wowed local audiences during the ballet’s New Works Festival in 2014, and says he’s been eager to return. When artistic director Stoner Winslett invited him back for Studio 2, it was his recollection of the caliber of the dancers — “versatile, driven, open and honest” — that most excited him about returning.

His original idea, solely because it was something he’d never done, was to find a piece of music with no instruments. “Silence, I did,” he says. “It came into my head I want a chorus chanting.” A friend’s suggestion led him to a song for the Virgin Mary sung by Russian monks of the Valaam Monastery. After tracking it down, he began visualizing movements based on what he recalled of the dancers’ abilities and personalities.

One thing he knew for certain was that the piece, dubbed “Realms of Amber,” would be focused on female energy. “In my culture, we celebrate women,” he says. “If you want to offend a Mexican, insult his mother or grandmother or sister.” He was especially taken with the contrast of male voices singing to a dance exemplifying female spirit.
Partially inspired by contemporary circuses, Zendejas shared his thoughts with the design crew — costume designer Emily DeAngelis and scenic and lighting designer M.K. Stewart — looking to them to help flesh out his ideas.

“Usually in dance, those designs are not big, but in this case, I wanted circus huge,” Zendejas says, smiling. “I gave them carte blanche, giving them pictures, the music, the idea of female energy for them to put their artistry into it, see what they’re inspired by.” 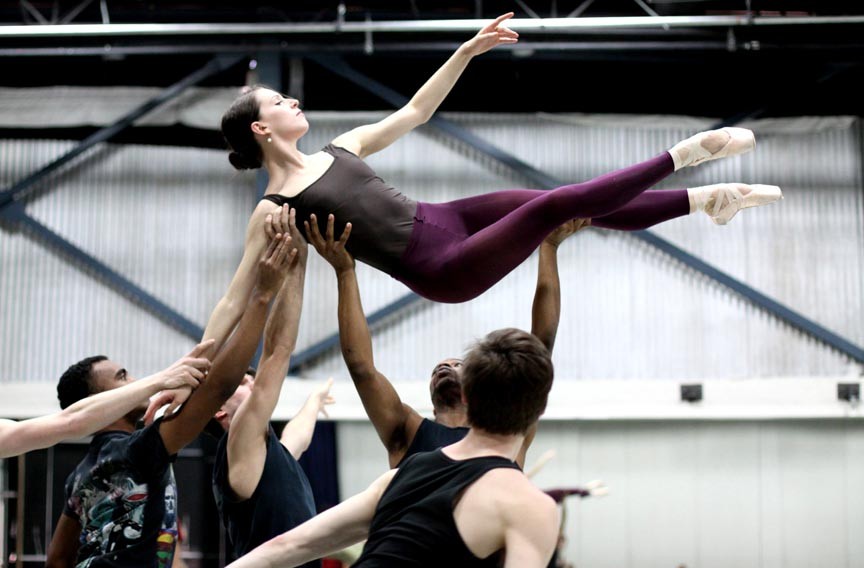 DeAngelis considers the collaboration with Zendejas as productive and intense.

“He creates a safe space to express yourself as an artist,” she says. “Everything has been an open and equal dialogue from the beginning of our conversations, all the way through the rehearsal process.”

Her goal in designing costumes for the production was to visually achieve strength in the male dancers and fragility in the female. She kept returning to imagery of leaves at the height of autumn because the season felt decidedly maternal and feminine to her, with the earth giving up the last of its bounty before a long winter.

“Visually,” DeAngelis says, “mother earth is begging us not to forget how vibrant and alive she is. The world lights itself on fire for us, so those shades and hues have given me the inspiration for our women.”

Back in the rehearsal studio, Zendejas starts with an image in his head, choreographing based on the dancers’ personalities and strengths to determine movement. When a passage calls for a particularly dramatic dancer, he’ll choose someone based on what he knows of their energy. Using his expressive hands and lithe body, he makes suggestions and they volley questions back and forth before a movement is practiced, discussed and tried again.