The spirit of Kelly’s Jet System Hamburgers lives on. 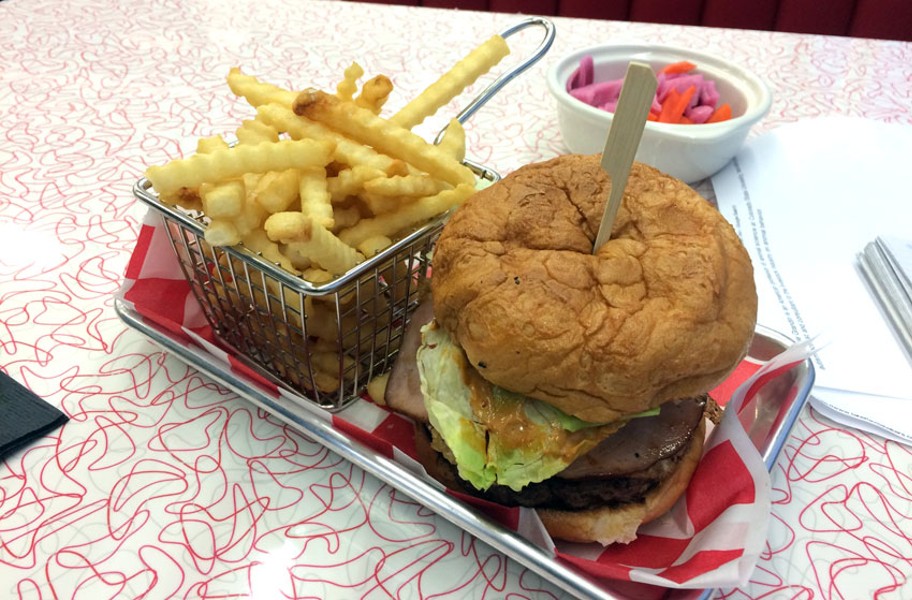 Brandon Fox The Parker Field burger at Boulevard Burger & Brews lettuce and tomato, plus chorizo, ham and a fried egg, all topped with spicy mayo.

I’m breaking every New Year’s resolution I ever had. The Parker Field sits before me on a small, rectangular tray lined with red and white checked paper. It’s a behemoth of a burger with the basic lettuce and tomato, plus chorizo, ham and a fried egg, all topped with spicy mayo. Next to it are perfectly crispy crinkle fries in a miniature fryer basket.

I try. I really do. If I’m going to break bad, I want to go all the way. But the burger’s just too big and I can only manage about half of it. That night I’m grateful, but at the time I really wanted to inhale the whole beast.

Boulevard Burger & Brew is now ready to open at 4 p.m. today at 1300 N. Boulevard in the long closed Kar World. The building was originally erected as Kelly’s Jet System Hamburgers, a 1950s chain with locations up and down the East Coast that predate McDonald’s.

There were originally three Kelly’s in Richmond. The two businesses that followed after the burger joint closed in the early 1970s, Mr. Moe’s Subs and Kar World, did little to change the building. Bathrooms entrances were accessible only from the outside, and the original slanted glass and distinctive red-and-white striping of the roof and its overhang were left intact.

This is the sixth project that includes Fat Dragon Chinese Kitchen and Bar, Foo Dog, Blue Goat, Wild Ginger and Sushio-O (now sold) that owner Chris Tsui and director of operations Ren Mefford have opened together. They have two other restaurants in the works, one on Grace Street and another in the GreenGate development in Short Pump.

But Boulevard Burgers & Brew is a little different. Because the building is on the National Park Service’s National Register of Historic Places, Tsui and Mefford had to follow strict guidelines to restore the building.

“We had to preserve as much as we could and there had to be a clear demarcation line between what’s old and new,” Mefford says. Between the original tile and the new, for example, the grout is a different color. The original footprint of the building is painted around the space in black. It isn’t dramatic, but if you’re looking for restorations, they’re easy to spot.

“We’d had an eye on this concept pre-Blue Goat,” Tsui says. “We wanted to open a place with cool burgers and lots of beer. … We looked at spots all the time, but the right building never came up.” It turned out that the perfect location was right down the street from Fat Dragon.

The man who made the burger I couldn’t finish is David Ventura, who came by way of chef Jimmy Sneed. A native of El Salvador, Ventura is paying just as much attention to his vegan burger -- using a separate griddle and fryer -- as he is to the meat-focused ones. He’s also a veteran of Jenna Sneed’s Fresca on Addison, which specializes in vegan cuisine.

The meat is supplied by Creekstone Farms. Its Black Angus beef is non-GMO certified and comes from a single farm. According to Mefford, the only other U.S. restaurant serving the beef is New York’s Eataly. Why not buy local? Mefford says he came up short when he was looking for a source of non-GMO certified beef in Virginia.

At the moment, Tsui and Mefford are waiting on the weather to put up the restaurant’s sign. “It looks like the Las Vegas sign,” he says. “It’s 22 feet wide and 25 feet high, with neon chasing and flashing lights. It’ll look like a giant marquee.” It takes two days to erect -- and wind is a nonstarter.

When I spoke to the Tsui and Mefford, there were at least 10 people training for front of the house. The kitchen was running at full tilt while Ventura worked out the kinks in the new equipment, which includes an exceptionally hot chromium-plated griddle that sears burgers in only three and a half minutes. The old-school arcade games hadn’t been installed yet and there was a lot of organizing to be done at the bar.

Yet -- without getting too sentimental -- the old burger joint that was waiting patiently on the Boulevard for so long looked alive and ready for a new challenge. The carhops were gone, but the parking lot seemed ready for people hungry for burgers with a 21st-century twist.


CORRECTION: This article originally stated that Ren Mefford was a co-owner. He is director of operations of EAT Restaurant Partners.