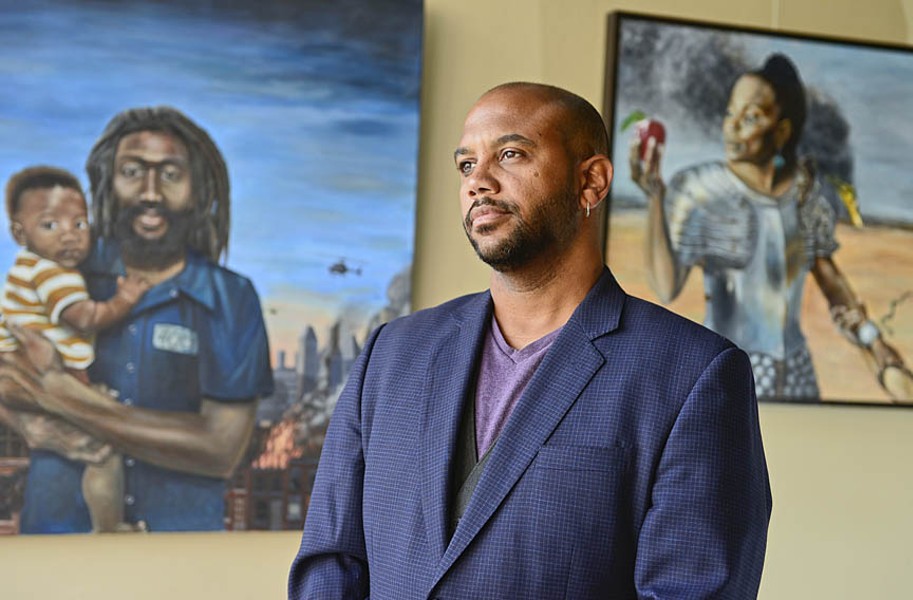 On an easel rests a partially finished painting of a girl holding an alligator, a historical reference to the barbaric practice of using black infants to lure alligators out of the water. Yet to be filled in are the ghosts of other children once used as gator bait, but there’s already a haunting aspect to the piece.

S. Ross Browne’s intent is clear: As a black artist, he’s taking ownership of this sordid bit of history. “There’s a sense of time traveling when you’re painting,” he says. “Time doesn’t start until you begin painting, until you feel connected to what’s going on.”

For Browne, that connection came early on, from doodling mock-cursive when he was 3 to admiring Peter Max prints growing up. By 13, he’d decided he was going to be an artist. Inspired by Frank Frazetta’s art on early Molly Hatchet albums, Browne became the go-to guy for the best show and party fliers while attending Virginia Commonwealth University.

Waiting tables and painting in his off hours, he worked on figuring out where he wanted to fit into the art world and how to get there. Stints as a freelance illustrator doing covers for books and myriad design work helped him diversify.

Despite his distaste for it, he also did some portraiture — only to learn that “People don’t like the way you paint them when they don’t like the way they look,” he says. Helping look after civil rights attorney Oliver Hill, who had gone blind, Browne asked Hill to sit for him, executing the portrait eventually used at his funeral.

For five years, Browne also did therapeutic art working with dying children. “They know what’s happening, but they’re not self-pitying,” he recalls. “It makes you live in a constant state of gratitude.”

A gallery displaying his works of neo-classical realism fronts his Hull Street space, while a studio in the back often finds him painting through the night and crashing in a bedroom. He’s aware that some artists paint what they think will sell, but that’s not his thing.

Browne’s subjects challenge conventionally assigned racial stereotypes, often garbing them in the style of white imperial culture from days gone by, which caught the attention of gallerist Myrtis Bedolla of Baltimore’s Galerie Myrtis, who represents him.

Three years ago, the Virginia Museum of Fine Arts acquired Browne’s “The Huntress” for its permanent collection, part of an ongoing effort by the museum to increase its holdings of African-American and African art.

“Ross is an extremely talented and creative painter who’s developed a very special style that’s very much his own,” says Alex Nyerges, director of the museum.

Referring to the VMFA’s retrospective opening June 11 of black artist Kehinde Wiley — whom he calls one of the hottest painting stars on the planet — Nyerges says: “Ross and Kehinde have done a marvelous job of introducing the black image in a more noble and dignified manner.”

Even when white artists paint black people, Nyerges notes, it’s usually in more colloquial or folksy ways. Neither word describes Browne’s work — and that’s intentional. The composed yet confrontational gaze of the woman in his work, “The Entitled,” challenges the viewer. But it also suggests a different history with her rich-looking purple robe, stiffly ruffled Elizabethan collar, elaborate braids and skull earrings. The sword in her hand shows that she means business.

By painting in the style of the old masters while using black faces, Browne offers black viewers a connection to the accepted history.

“It messes up kids’ psychology when they go to a museum and they’re not a part of it,” Browne says. “It sends the message to young folks growing up that being dark is bad. I impart regality to my subjects, creating the fiction of our own history. They can look at the image and say, ‘That’s me.’”

Some blacks constantly try to reassess their identity, he says: “Skin color was never a thing in my family. It’s OK to show cultural representation no matter what your race. The difference in me painting as a black man is that I’ve had to walk a mile in shoes I didn’t ask to put on and I can’t take off. Not that I’d want to.” S