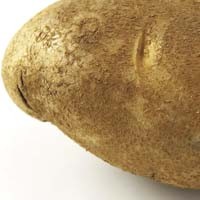 I've never quite gotten over the hatchet job the Atkins/South Beach people did to potatoes. The spud has been both demonized and vilified, and you might as well mainline Pixy Stix than eat a potato these days. And I was eating them with almost every meal — baked, hashed, mashed, gratinéed, and even — God help me — fried.

Not being good with numbers, I wasn't exactly sure about the whole high/low glycemic thing, but it sounded bad. So potatoes were out, and suddenly there was a big, gaping hole on the side of my plate. I tried filling it with more vegetables, but all the planning and shopping and chopping that went into this new way of eating was getting me down, and besides, I really missed carbohydrates.

But I couldn't look at potatoes the same way anymore; they'd been permanently relocated to the guilty-pleasure section of my brain (right next to bacon and just before butter). Instead, I started flipping through cookbooks and magazines, and thinking seriously about whole grains and beans.

My experience with beans had been mostly confined to black beans and the canned, refried variety beloved by Mexican restaurants everywhere. I wasn't that enthusiastic about the other varieties either, because I could never remember to plan ahead and soak the dry beans overnight before cooking them for a couple of hours the next day. (Julia Child has a quick soak method in "The Way to Cook," but it still adds another hour to the two-hour cooking time, and that's about two hours too much for me.)

Then I discovered that most canned beans can be infused with flavor if drained, rinsed and sautéed with a little olive oil, garlic and pungent herbs like rosemary or fresh thyme. Throw in some browned pancetta and plenty of black pepper, and you have a side that'll make you forget all about french fries (most of the time).

Some of the grains I wanted to try I hadn't even heard of — things like quinoa and groats — and others, like millet, I thought humans didn't eat. I tried a bunch of different recipes, but my current favorite dish and most crowd-pleasingly successful is a creamy, earthy concoction of quinoa and Crescenza cheese from Heidi Swanson's "Super Natural Cooking."

Crescenza is a soft, mild Italian cheese (I substituted brie for it with no problems), and quinoa is a tiny, nutty grain that crunches with an addictive pop between your teeth. The combination of the two, along with an abundance of sautéed mushrooms, creates a 21st-century twist on basic risotto, and the unexpected bang of red pepper flakes is just this side of genius.

So I've made the leap onto the whole-grain bandwagon unscathed. I know the potato isn't the evil carbo-villain of the plant world, but now that I've become acquainted with some of its other members, potatoes no longer have the freedom to muscle the others off my plate.


Quinoa and Crescenza With Sautéed Mushrooms

1) Heat 3 tablespoons of the butter in a large saucepan over medium-high heat, then add the garlic and onion and sauté for 5 minutes, or until the onion starts to soften and get translucent.

2) Add the quinoa, wine and 1 teaspoon of salt, bring to a boil, and continue boiling for 3 to 4 minutes, until the liquid has reduced a bit.

3) Add the water, return to a boil, then lower the heat, cover and simmer for about 25 minutes, or until the quinoa opens up, revealing a little spiral, and is soft and pleasant to chew.

4) Meanwhile, melt the remaining 3 tablespoons butter in a large skillet over medium-high heat, along with the red pepper flakes and a few pinches of salt. Stir in the mushrooms and cook without stirring for a few minutes, until they've begun to brown and release their juices. Then shake the skillet every few minutes until the mushrooms are evenly browned, about 4 more minutes. Remove from the heat and season with salt and pepper to taste.

5) Once the quinoa is perfectly tender yet textured, drain off any excess liquid and stir in the cheese. Ladle into big bowls and top with mushrooms. Serves 4 to 6.