A photography exhibit explores 50 years of life in the White House. 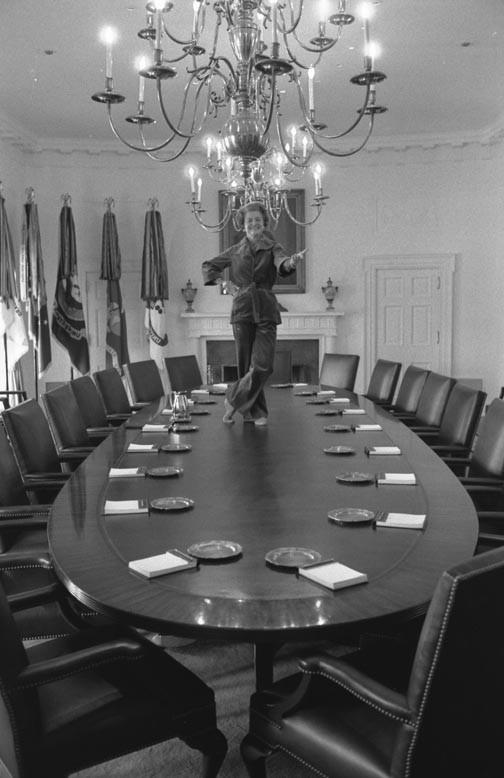 The proof is in the photograph, caught by Pulitzer Prize-winner David Hume Kennerly, Gerald Ford's photographer. It's one of 50 photographs on view at the Virginia Historical Society as part of "The President's Photographer: Fifty Years Inside the Oval Office."

John F. Kennedy was the first president to have an official photographer, and most presidents have followed suit. Their official photographs are a key element in image making for the administration and understanding the country's leader for the public. The job is to document the president's greeting dignitaries and visitors, but also to take pictures of everything else, from official events to private family moments. It soon becomes clear in this exhibit which photographers were allowed unfettered access and which were kept at arm's length.

It's impossible to not be struck by the photographs of Yoichi Okamoto because of the unlimited access he had to President Lyndon B. Johnson during his term. Naturally, there's the iconic image of Johnson, Lady Bird and Jacqueline Kennedy as he's sworn in on Air Force One after John F. Kennedy's assassination. But the most telling image is one of LBJ towering over and staring down Richard Russell, the Georgia senator who wasn't a supporter of his Civil Rights Act. It's clear that Russell never stood a chance.

Robert McNeely's image of Bill and Hillary Clinton being briefed on Air Force One shows a couple fully engaged in issues together. She leans on the back of his chair over his head while they mirror each other's poses, both with their hands covering their faces and eyes directed sideways at an unseen speaker.

Kennerly's photographs, like the one of former Martha Graham dancer Betty Ford taken the day before the Fords moved out of the White House, show a decidedly artistic bent. One of Ford smoking a pipe shows a contemplative president with wafts of smoke curling around his head, creating a chiaroscuro effect.

There are intimate photos, too. David Valdez's picture of pajama-clad George H. W. Bush and wife, Barbara, still in bed with a host of their grandchildren running around the room shows the leader of the free world as just a grandfather to a gaggle of energetic little ones. Cecil Stoughton's image of JFK holding daughter Caroline against his shoulder was taken aboard the yacht Honeyfitz three months before his assassination.

"You could read a lot of biographies about presidents and not be sure which is true," says Virginia Historical Society lead curator William Rasmussen, walking through the exhibit. "But with photographs, you can make your own decisions about people. The presidential photographers got to shoot things we would never have seen otherwise. It's a show you can go through quickly and get a lot from it."

But don't go through it quickly if you can help it. The exhibit, curated by National Geographic and on a five-city tour, includes an hour-long film showing a day in the life of Pete Souza, the current presidential photographer, as well as interviews with previous ones. It's worth taking the time to watch for the insights into a job that allows little free time and innumerable rewards. Obama shows up in it frequently, acknowledging of the omnipresent Souza, "It's one of the hardest things to get used to."

That said, Obama also shares that one of his favorite pictures is of a little boy touching his head. On a visit to the Oval Office, the staffer's son informed the president that he'd been told that they had the same haircut. Obama bent over to let the boy feel for himself and Souza caught the moment. It isn't one that many people could have imagined.

But neither is a first lady perched on the cabinet table. S

"The President's Photographer: Fifty Years Inside the Oval Office" runs through July 8 at the Virginia Historical Society, 428 N. Boulevard. Information at vahistorical.org or by calling 358-4901.