Preserve or Push Out

In the debate about how best to preserve the city's historic districts, an uncomfortable side effect stokes tempers: gentrification. 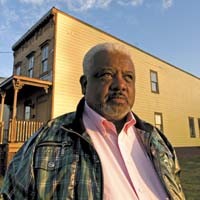 The metallic slam of a steel door shatters the late-night summertime calm of West Broad Street, spitting two figures onto the sidewalk. Faces contorted with passion, they shout insults that chase echoes down the darkened street.

Buddy Corbett, a thundering, gravel-voiced brawler whose tightly wound muscles ripple as he snarls, is all but locked in mortal combat with his physical and ideological opposite, Elaine Odell. She is slim, tall, stylish in a short tennis-style skirt, pastel top and athletic trainers. She's as beautiful in the dim streetlights as Corbett is bullish, but her face is a twisted twin to his, raging and spewing expletives and oddly technical city planning terminology while she chases him around a parked car.

The two maneuver menacingly around the 4,000-pound vehicle, neither giving ground as their invective-laced debate over affordable housing versus historic preservation hits a fever pitch.
Corbett peels off, speed walking across four lanes of Broad Street toward his car in the Lowe's parking lot, a block from Lombardy Street. He shoots Odell a middle-fingered final tribute.

Inside the Firehouse Theatre, the remaining crowd is oblivious. There's plenty of heat in here too during a public forum to discuss the city's Commission of Architectural Review, an appointed body sometimes known as CAR that functions something like a neighborhood association, governing with strict covenants and guidelines that dictate life in the city's dozen or so old and historic districts.

Historic preservation in the city, particularly in residential districts such as the Fan, Church Hill and Jackson Ward, has always been politically prickly. Getting residents of any neighborhood to agree on preservation standards never has been easy, but as the near confrontation outside the theater attests, there's an uncomfortable undercurrent to the debate. To some, the guidelines encourage gentrification, erecting an economic barrier for older, more established residents.

Minutes before blazing out of the theater, Corbett, a resident of Union Hill, called historic districts the equivalent of “smallpox-infected blankets” to the longtime, often economically distressed residents of the neighborhoods. In his mind, the rules that accompany the districts are implemented at the behest of come-heres intent on remaking neighborhoods as the next Museum District or Ginter Park, but they're often an odious hardship on older residents.

“I don't think it's a conspiracy,” Corbett says, in mocking defense of the districts and the commission's governance of their rules. “It's an oligarchy by default.”

This is why Corbett opposes Union Hill, a small corner of Church Hill, becoming an old and historic district. The more than 4,000 mostly black residents of the neighborhood who, according to census data, have an average annual income of less than $15,000, aren't likely to thrive under restrictive neighborhood covenants that serve to please fewer than 100 white families, Corbett says. Those recently transplanted white families have eyes toward the neighborhood's inevitable gentrification, he contends. (The commission was expected to vote on whether to designate Union Hill as an old and historic district on Monday, after Style Weekly went to press.)

In the Union Hill debate, Corbett, who is white, often is painted as a rabble-rouser defending a constituency that doesn't exist. But the Rev. Melvin Williams stands behind Corbett's efforts.

Pastor of Temple of Judah on 22nd Street in Union Hill, Williams ministers to a flock that largely consists of low- to moderate-income blacks who've occupied this neighborhood at least since white flight, some since well before.

“The people who've been living here for years are forgotten about,” Williams says. He disagrees strongly with the Union Hill historic district, fearing for his congregation members and their ability to hold onto their homes when housing values and property taxes soar with gentrification.

An old and historic district designation simply pushes forward the time when gentrification pushes people out, Williams says. Nobody here, he says, can afford to live in what amounts to a planned community with restrictive covenants: “The whole thing is the seniors not being able to do things for their homes.”

While Corbett defends the little guy and goads the historic district supporters, the broader debate rages: In one of the nation's most historic cities, what's the best approach to preserving Richmond's richly historic architecture?

City Council creates the districts. The architectural commission then follows federal guidelines, which insist that new construction in a historic district such as Church Hill — an addition to an existing home or a new building, for example — must not mimic older architecture. In essence, the guidelines encourage more modern architectural styles to differentiate new additions from the old — or require exact reproductions based on historical records.

“Our guidelines are directing us to follow the standards set by the National Park Service,” says David Johannas, principal architect of the Johannas Design Group and a member of the commission. He says that many of the financial opportunities afforded by old and historic districts — including tax credits — rely on adhering to those standards.

But equally important, Johannas says, is that preservation of historic architecture is about context. Allowing exact reproductions of historic homes in historic districts, or even additions or simple repairs that clutter the historic record, give a false impression of the district's history.

In the opposing camp, vocal groups of homeowners are devoted to meticulously maintaining their homes according to the architectural style of the period in which they were built. They point to successful districts without city historic designation, such as Ginter Park, as evidence that regulations aren't needed.

This camp in many ways agrees with Corbett. Land rights — the ability of a homeowner to make improvements without watchdog restrictive covenants — are central to the debate about how much influence the architectural commission should have.

“These old and historic districts were formed by the districts — CAR was formed to serve those residents,” Church Hill resident James Daab says, referring to the mid-1950s and the early efforts of the Historic Richmond Foundation to preserve Church Hill. By the modern interpretations, Daab is fond of saying, Church Hill would not have been preserved as it is today because reconstruction efforts that replaced long-gone porches and architectural details would not have been allowed under the modern guidelines.

Daab made his comments at a lightly attended City Council committee hearing in October. The committee, created to study the commission and make recommended changes, is chaired by Councilman Bruce Tyler. It's expected to decide in the coming months whether to recommend altering the structure or authority of the Commission of Architectural Review and its appointed commissioners.

Daab was among a group of residents taking exception to the architectural commission's denial of some residents' preservation efforts. Not only are allowable repairs often more expensive, he says, but also could wind up changing the historic fabric of communities. The message, says Williams from Temple of Judah, resonates with the low-income residents of Union Hill who can't afford costly repairs, let alone restoration projects.

“You have a huge responsibility to go by the desires of the people who live in these districts,” Daab says.