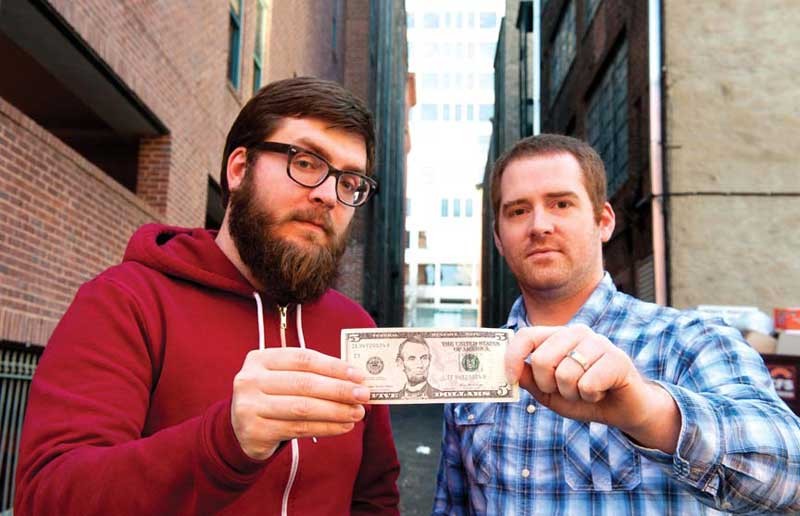 Here’s some Lincoln-related news that has nothing to do with Steven Spielberg’s movie — unless you are Spielberg, or friends with him, and can convince two dudes from the Martin Agency that your idea is worthy of $5.

If you’re the type to scoff at a fiver, move right along. Otherwise, act now! Because Phil Williams and Kevin Rothermel have only about 85 more of the bills and they’re itching to give them away.

It may not be as big as a government bailout, but their project, the Five Dollar Friendship Stimulus, takes no taxpayer money — just a creative, unique, shovel-ready idea for how you and a friend would put your prize to work.

Ellen used it to buy her 93-year-old friend, Eva, a piece of birthday cake. A winner from San Francisco used it to buy materials to make a $5 holiday laser-light show for a friend. Kristin Axelson printed five high-quality, color copies of a shirtless Ryan Gosling to pep up her female coworkers.

So it isn’t necessarily about the money. “It’s more about what you can do,” says Williams, 31, a senior account manager. No, Gosling’s abs might not save the world. “But I guarantee those five girls were really stoked to get those at their desk,” he says.

The guys launched their project with a website Nov. 15 after getting a $500 infusion from the advertising agency in a challenge to make waves with the money. “We didn’t want to give it all away in one fell swoop,” Williams says, “’cause that’s no fun.”

“I think the idea is that this puts it in peoples’ hands,” says Rothermel, a 32-year-old senior strategic planner. And perhaps in this kind of economy, the value of friendship gets put in perspective. People “are reconnecting with what’s important,” he says.

So far, their website — put together with help from friends — has seen more than 1,000 hits. The goal is to pick one winner a day. And when all the money’s out, Williams says, maybe someone will say, “I’ll give you another $500 to keep it going.”