Prelude to a Kiss

At the VMFA, Elvis is back in the building. 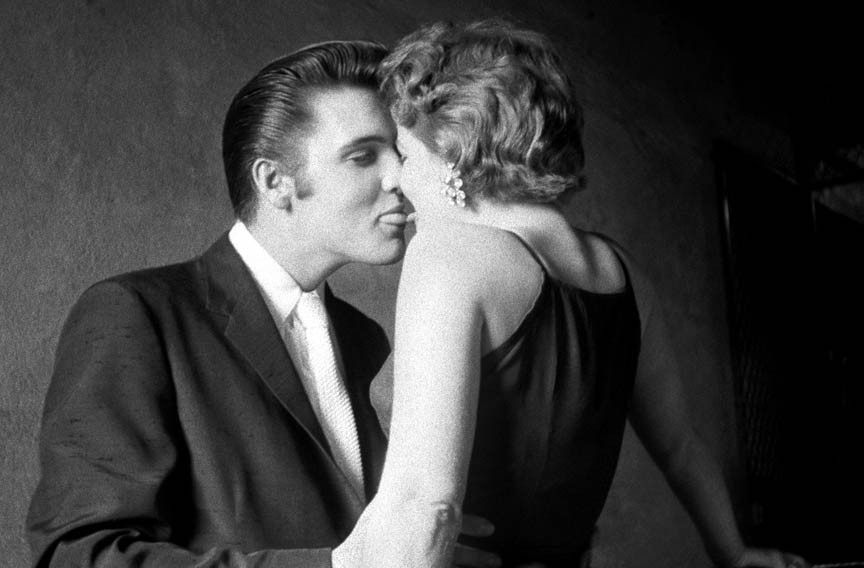 For years she was the mystery lady of rock 'n' roll.

"The Kiss" is one of the indelible shots included in a much-traveled exhibit of photographer Alfred Wertheimer's work, "Elvis at 21," opening this week at the Virginia Museum of Fine Arts. Gray, formerly an enigma wrapped in nitrate, will be the museum's featured guest Jan. 8, on Elvis' birthday, and Wertheimer will appear Jan. 20 at a screening of the documentary "Elvis '56."

More than a half century ago, Wertheimer was a young freelance photojournalist, asked by RCA Records' publicity department to shoot photos of a new, recently signed artist. He recalls asking: "Elvis who?"

But the photographer quickly realized what he had, and shadowed the singer everywhere, eventually following him to Richmond and taking iconic photos of Elvis at the train station, the Jefferson Hotel and the Mosque, now the Landmark Theater.

"I was just as interested in the pimples on Elvis' back as I was with Elvis on stage. He was a potential new young hero," Wertheimer says. Since Elvis' death in 1977, the sometimes shockingly intimate black and white photos have been used for countless album covers, postcards, books and memorabilia.

That Elvis' love interest seemed to vanish from history only added to the tantalizing appeal of "The Kiss." But in August writer Alanna Nash broke the scoop in Vanity Fair that the mystery lady had been located — Gray, a petite woman from Charleston, S.C.

For Gray, it all started when she and friends were carousing at the bar in Charleston's Francis Marion Hotel. Several of them started talking about a handsome new singer they'd recently met, and they dared Barbara, a 20-year-old single mother, to call Elvis. "I never saw him, never heard of him or knew who he was," she recalls.

She rang him anyway. "We had a nice conversation," she says. "I told him that I was coming through Richmond, where he was to sing and where I had family, and that I was on my way to see my boyfriend in Philadelphia. He said, 'Let me send my car for you,' and I gave him my address. The next morning, the doorbell rang and a man said, 'I'm Gene and I was told to drive you to Elvis.'"

Gray, who acknowledges being a little "wild" in those days, got in the car with Gene, Presley's cousin. At this point, she hadn't even heard the singer's music. And when she caught an earful of it, she didn't like it, she says: "I was a jazz fan back then."

She was driven to her aunt's house in Richmond, on the site where Lewis Ginter Botanical Garden is today. "My aunt was shocked by all of this, me getting dropped off in a white Caddy convertible," Gray recalls. The next morning, Gene picked her up and took her to the Jefferson Hotel, where she met a shy Presley.

"He was a really nice young man, obviously came from a good Christian background," she recalls. "He was jumpy, seemed a little insecure. But underneath it all, he was a sweet young guy. He was also very accepting of me. He said he wouldn't want his woman smoking cigarettes or drinking beer. I told him: 'I'm not your woman. If I want to smoke or drink a beer, I will.' He liked that."

Gray accompanied Elvis to the Mosque, where the singer was booked for two shows, and where the famous backstage kiss was captured.

"He was just being silly and playing around," Gray says of the moment. In her account, Elvis told her he wanted to kiss her and she resisted. "I told him, 'No, I have a boyfriend.' I think he might have known Al [Wertheimer] was there. I didn't notice Al."

Wertheimer recalls encountering the couple at the end of a long hallway. "There was poor lighting. But you do with what you have. I thought, 'If I could only get past them, I could get the light from the window.' So I [assumed] the role of the maintenance man. ... 'Excuse me, coming through.'" He recalls Gray saying, "Elvis, I betcha can't kiss me," and Presley responding, "Betcha I can." And after one aborted attempt, where the couple's noses crushed against each other, the rockabilly singer came in for what Wertheimer describes as "the perfect landing."

Later, after the gig, Gray accompanied Elvis to the train station, and stayed with him for a half hour, alone, in his compartment. "I never had sex with him," she says emphatically. Instead, Elvis tried to convince her to go with him to New York, where he was slated to appear on "The Steve Allen Show." She says she turned him down.

Even with the largest mystery of the photo solved, there's considerable disagreement about what really happened. "[Barbara] absolutely claims that she never kissed Elvis," Wertheimer says. "She's concluded that she stuck out her tongue but that it was to say, 'Don't kiss me.'... She wants to remain respectable." But the photographer points out that during the last photos showing their encounter, "she is holding his waist very tight."

Years ago, Gray says she contacted Wertheimer to tell him she was the mystery lady in "The Kiss," and he gave her the brush-off. Wertheimer says he doesn't recall that. "But she finally got her wish," he says. "To be recognized as the kiss lady."

"I think that Al has cultivated this mystery," Gray says. "He has deliberately kept it secret all these years." Gray, who works to help abused women, says that she's no publicity hound; she plans to fade back into obscurity after her VMFA appearance. "This is it for me," she insists.

As for the shutterbug, he's still taking photos at age 82. And as long as there's a fascination with Elvis, Wertheimer's images will live on. He plans to release a definitive photo book in May that will contain 150 unpublished photos of his work with Elvis — including several that feature Barbara Gray.

After all these years, does he ever get sick of talking about Elvis? "I would be disloyal not to talk about Elvis," Wertheimer says. "I make quite a decent living off him." S

"Elvis at 21: Photographs of Alfred Wertheimer" will be displayed at the Virginia Museum of Fine Arts from Dec. 24-March 18. Eight dollars general admission. Barbara Gray will appear Jan. 8, and Alfred Wertheimer will sign books and appear at a screening of the documentary, "Elvis '56," on Jan. 20. For information, go to vmfa.state.va.us.