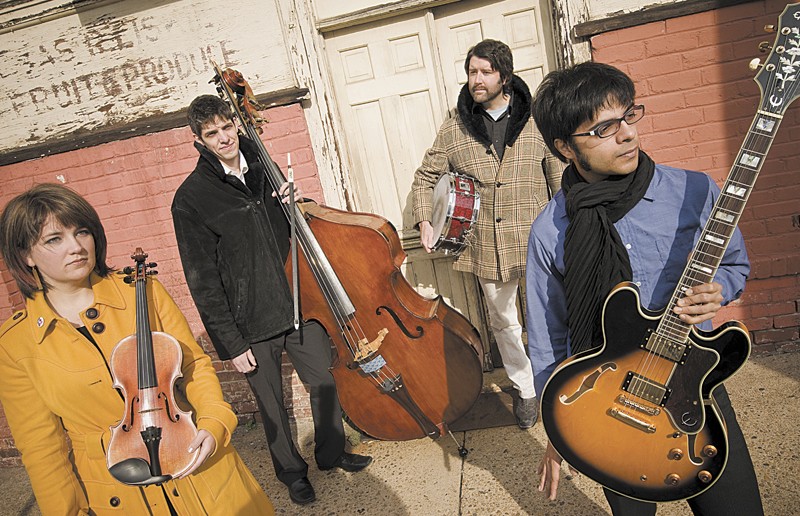 If things continue the way they’re going, Prabir Mehta may fulfill his destiny as the Indian Ray Davies. Or was that the Indian Colin Blunstone?

Whatever the case, the 31-year-ld Mehta, who moved to Richmond from Gujarat, India more than two decades ago, has long since proven his knack for writing catchy pop hooks. Since disbanding his touring rock group, the Substitutes, nearly two years ago, he’s kept busy. He immediately formed Goldrush (formerly Prabir/Goldrush) with the husband and wife team of Richmond Symphony performers Treesa Gold on violin and Matt Gold on double bass. The group has since added Gregg Brooks on drums. He also plays with up-and-comers Long Arms, and the “crazy-stupid, punk-cover band,” the Druthers.

Goldrush has a unique opportunity this summer when it takes off in late July for a weeklong teaching gig at the Omaha Music Conservatory in Nebraska. It’ll serve as the house rock band of sorts, teaching classes and mixing things up with formally trained musicians to see how classical music can be “blended and meshed and crammed and squeezed into other genres,” Mehta says.

Recently, Mehta returned from New York where he visited former Substitutes drummer Tyler Williams, who now plays with fast-rising Seattle folk darlings, the Head and the Heart, on Sub Pop. They met up for a taping of the “Late Night With Jimmy Fallon” show, where the Head and the Heart was performing. Mehta somehow managed to make it on air himself to draw dirty pictures for a national television audience.

Style Weekly talked to him about his upcoming “School of Rock” moment and why everyone can’t help but love that cute Jimmy Fallon, even if he is the most ass-kissing interviewer on the planet.

Style: So will you be teaching classical players how to spit beer?

Prabir Mehta: Actually, that’s day three. Day one, I’m going to teach them how to get out of work — my aunt died, I’ve got a cold, etc. Then the dos and don’ts of drug use. And how old is too old? We all have to ask ourselves that on the road.

[Laughs] I was talking with family members, and they said in an Indian accent, “You will be like Jack Black.” ... But I’m excited the lines are blurring. I’m hoping things like this happen more often, because the lines between genres should blur.

How did this opportunity come about?

Treesa is from Kansas and teaches violin there over the summer. She was told about this program in Omaha and asked if she was interested in turning her rock band experience into an educational experience. We were all down for it.

Most of the people [at the conservatory] have a pretty substantial classical background. Treesa and Matt will be teaching classical and how to fuse it into things “outside the box.” It’s going to be challenge for me. I have to work with students who have a lot more training than me. But a lot of things you see classical musicians play were written hundreds of years ago ... whereas I’m self-taught. I’ll be teaching them how to jam, I guess. Or how to play a guitar solo with just feedback.

We’re all victims of our styles, but it’s going to be interesting to see what we come up with together. I’ll try to get them to explore their instrument in a way they may not have thought about.

Sounds like another way to make classical music appeal to younger generations and subsequently stay alive.

Yeah, it’s cool. A lot of those classical pieces were cutting edge for their time. ... Playing with such great musicians has made me a student of music again. I’ve written more songs this year than ever before. This band, and their vocabulary, has reinvented my ears for how to listen to music.

Has Goldrush changed your songwriting?

What I love about it is we all went into it blind. I loved playing with the Substitutes but it was refreshing to play with different people. The Substitutes dealt with rock and roll topics, and I put limitations on myself. With Goldrush I decided, "Fuck it, I’ll write about whatever I want," be it my vehement atheism or whatever ... growing up as an immigrant, my views on politics. I didn’t care what anybody thought.

With Matt and Treesa, we like the same things. We like interesting chord progressions and melodies, dynamic tempo changes. We love the Beatles and Beethoven. When we started we barely knew each other, but I consider them some of my best friends now. ... The skill set that’s really needed is the ability to find what’s right for the piece.

Was it hard seeing your old bandmate Tyler jump right into a group that has taken off overnight?

No, Tyler moved to Seattle two years ago. They worked super hard for two years straight to get what they have, so it does not surprise me at all. I’m totally happy for them!

What was your impression of Jimmy Fallon?

I was hanging around the guest area at NBC before the show and was asked if I could play Pictionary on TV and be willing to make a fool of myself. I said “yes” to all of the above, and it all happened really quickly. All my drawings were dirty jokes … boys will be boys stuff. I can see why a lot of people are in love with Jimmy Fallon. He had a great tie. He was nice and made me feel whatever I did would be cool. But my favorite thing was shaking hands with all the guys in the Roots (the house band). I can now cross that off the list.

Goldrush performs with Scolaro and Zepp Replica on June 2 at the Camel. Doors open at 9:30 p.m. For information, go to thecamel.org. Goldrush will have its first EP available at the show.