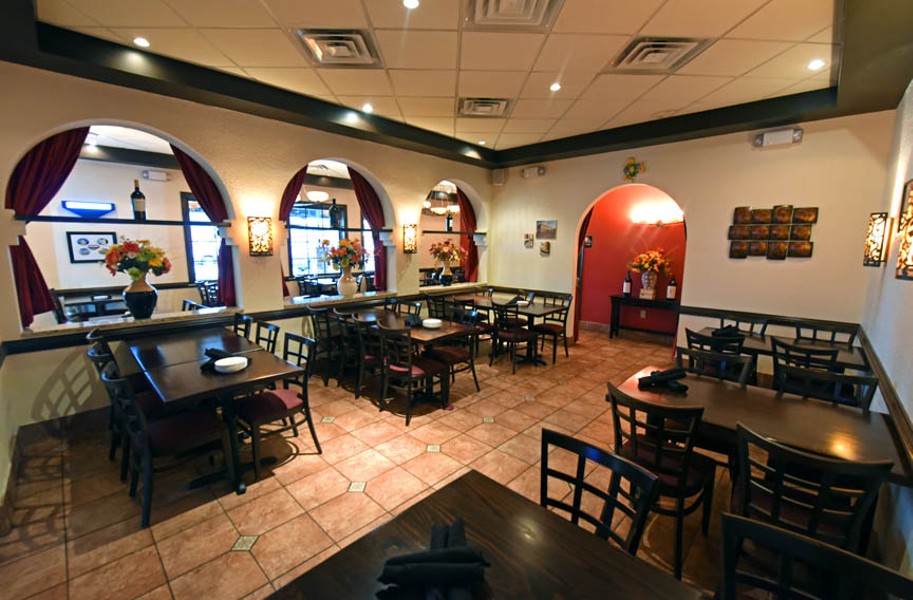 Scott Elmquist Mediterraneo Grill in Winterfield Place is one of the restaurants transforming Powhatan into a dining destination.

The Powhatan County line is near where Winterfield and Robious roads meet, and the landscape couldn’t change more drastically. Big-box stores and neighborhoods fall away. The road narrows and pasture begins to dominate. It hardly seems like the stage for a bustling dining scene, but because of a few pioneers, that’s all changing fast.

“I remember when I first drove out here seven or eight years ago,” says Ren Mefford, director of operations at Eat Restaurant Partners. “The closest food source was microwaveable burritos at a nearby convenience store.”

Mefford helped launch Wild Ginger in 2009, a 100-seat Asian restaurant that frequently serves as host to pop-up dinners and charity events. The building faces herds of grazing sheep from its vantage point at Winterfield Place, a mixed-use development on the county line. Next door, Mediterraneo Grill lures stomachs with fresh Italian fare by Joseph, Mario and Rick Lo Presti, brothers who own Mary Angela’s Pizza, Pronto Pizza and Piccola Italy. Vino Market buoys diners by serving an array of wines and local beers.

Casey Sowers is the mastermind behind this walkable development. He’s shied away from the outdoor mall aesthetic, hoping to create more of a traditional town square design that’s still car-friendly. In February, Sowers announced the beginning of Phase 2, a $50 million undertaking on 50 wooded acres across the street from the existing shopping center. He envisions a diversity of restaurants: sit-down affairs, fast casual joints and boundary-pushing foodie destinations.

“All the restaurants and drink businesses here have been successful out of the box, which is drawing new potential tenants,” Sowers says, declining to name who’s nibbling on the line. “I’ve found I can err on the side of chefs who emphasize fresher foods, local foods. That’s where people are going, versus chains.”

A mile away is Independence Golf Club, which anchors the Founders Bridge neighborhood. Sowers’ expanding development will connect with the club through new housing and footpaths. Chefs at the club’s new restaurant, Tavern 19, already are thinking of dinner collaborations, such as craft drink nights with Vino Market as host.

Meanwhile, Tricycle Gardens was invited to start a half-acre plot on the grounds and now provides Tavern 19 with backyard vegetables.

“We had to do some tinkering with our concept after opening last year,” says Kyle Goodwin, Tavern 19’s food and beverage director. “Now we’re more flexible. Our menu ranges from crab-and-leek bacon dip to grilled cheese. We’re still trending in the same direction as the Winterfield Place restaurants [and] we go through five menu changes a year.” A new addition to the club this month, Café Zata, will serve Blanchard’s Coffee Roasting Co. brew and even include a drive-thru.

Goodwin says he gets about 10 to 15 percent of his ingredients from the garden and hopes it eventually will reach 50 percent. Project gardener Scotty Guinn Dilworth says it’s been a happy accident for Tricycle Gardens to find itself in a front row seat at the rise of the area’s dining scene.

“We’ve typically been more involved with urban agriculture, so it’s an interesting location for us,” she says. “But the awareness about food sources is extending from urban cores into more traditional neighborhoods and that’s creating a different set of demands among residents.”

“We already supply produce for 70 restaurants in the region, but it’s cool to see Powhatan popping up on people’s radars,” she says. “We call ourselves the Napa of the East Coast — when we’re feeling grandiose.”

Indeed, Pendergraph says to expect huge crowds at the county’s annual wine festival, the Festival of the Grape, to be held Oct. 22 in the historic Courthouse Square. Sure, there will be a Manikintowne kickoff dinner that celebrates farm-to-table. But there will be something else, too, which is perhaps the secret to Powhatan’s epicurean charm. “We’ve got character,” she says. S