Manchester neighbors pull together in the wake of developer’s arrest. 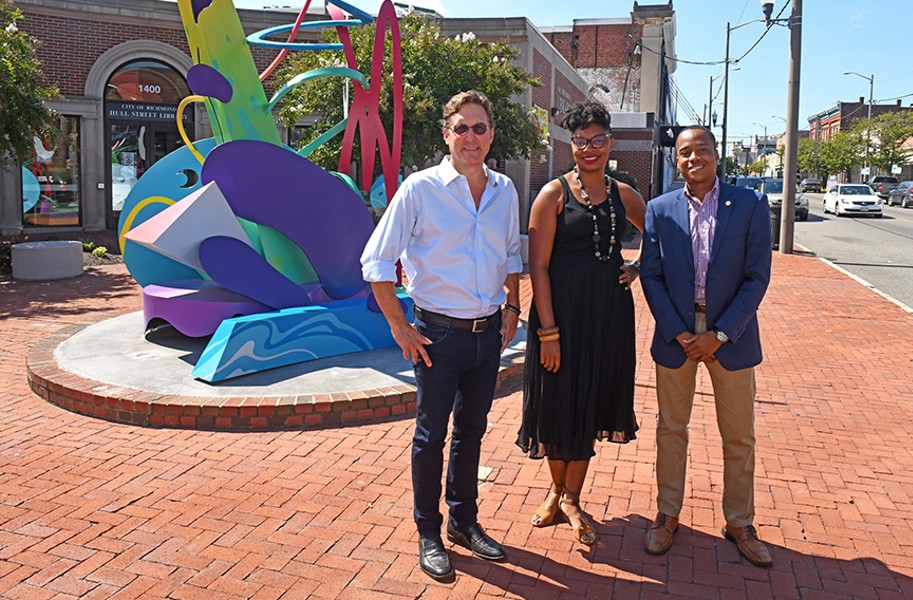 The city plan for Hull Street, completed in 2013, starts on a grim note.

After community discussions and meetings, the authors came to describe the once-thriving area as “past its prime,” appearing as “a[n] outdated strip commercial artery with a predominance of parking lots, many vacant parcels and buildings,” where cars whiz by at dangerous speeds.

To change that narrative, three residents got together to form Hull Street Action, a group that hopes to bring together long-term residents and business owners for neighborhood advocacy.

The trio, composed of communications consultant Sheri Shannon, real estate developer Charlie Westbrook and Preston Page, a lobbyist with Advantus Strategies, was formed in the aftermath of the arrest of developer Michael Hild, former chief executive of the now-defunct Live Well Corp., on federal fraud charges. Hild has pleaded not guilty in a federal court in New York.

When Hild began buying up vacant buildings in Manchester, it raised questions about gentrification and loss of community. Now members of the neighborhood are asking: Who will fill the vacuum if his properties are seized by the federal government?

Page isn’t worried. “We see it as an opportunity,” he says.

Like Westbrook and Shannon, he’s a newer resident, having arrived in Richmond three years ago by way of Newport News from New Jersey for a job in politics. When the Hild and his wife proposed extending a neighboring historic tax district, he says he got involved.

“The process wasn’t very transparent,” he says, so he joined the Department of Historic Resources as a consultant working with local residents to share information and collect their concerns. It was a coming-of-age moment for him, or, as he puts it, tongue-in-cheek, “Richmond made me a man.”

Although Westbrook, who was part of the Manchester Alliance with the Hilds, describes them as friends, Shannon and Page say the couple didn’t represent the type of development the neighborhood needs.

“We want to reach out to potential new owners before there are problems,” Shannon says, addressing the possibility that many buildings may go up for auction. “A lot of black residents didn’t feel welcome in the businesses they [the Hilds] opened, and we need these spaces to be inclusive.”

The short-term goal for the group is a website. It’s raising funds to develop it via a crowdsourcing site, gofundme.com/f/hull-street-action-website, to address the first challenge Shannon sees: “We need to earn trust,” she says.

It will be a central place to engage with other residents and to coordinate outreach.

“We want everyone included,” she adds. “Residents have a voice, we want to create a table for them to come to.”

Amy Wentz, a longtime activist turned 8th District City Council candidate, is one of the community leaders who gives her blessing.

“Sheri and Preston know how to engage with the community, they’re great,” Wentz says when reached by phone. She’d just finished a meeting with Shannon for ReLeaf, a program seeking to plant trees in South Side.

As one of the first critics of the Hild developments, Wentz clarifies she’s not against development or “revitalization, although I hate that word,” she says. But she notes the subtext of a term often used for the actions of white developers entering predominantly black neighborhoods. “I just ask that the community be included.”

She says that Hull Street Action could “be the right vehicle to bring development to the neighborhood that doesn’t drive people out,” noting her trust of Shannon and Page. “I hope they’ll work with the Hull Street Merchants Association, too, and partner with the people who have been here.”

With a focus on residents, Westbrook says they fill a niche not served by the merchants association. And Shannon adds that she wants to be proactive.

“You always see folks come out when something bad happens, but you don’t see that engagement throughout the year. We want to give residents a place to make that happen.”

In addition to town hall meetings and community planning, the group hopes to bring government grants and legislative packages to help the corridor. One of Page’s areas of expertise is in legislation and he envisions using his skills to craft legislative packages for the city and General Assembly with his neighbors.

“We can rectify the wrongs of systemic redlining and focus on equity,” he says, pointing to areas where ordinances could help, like the high-speed streets and lack of complete sidewalks or convenient bus routes in the area. The group is hesitant to list priorities, noting it wants those to come from open meetings, but safe streets is a challenge members all see.

With better access, Shannon says, “Hull Street could be a hot spot of activity. We want to bring people south of the river again.”

Westbrook nods in agreement. “And we want to keep it open for the neighborhood. This is a dynamic place where we want people to coalesce, but when we have an autobahn in the middle, that’s not going to happen.”

They all agree on one point: The Hilds aren’t synonymous with Hull Street.

Whatever happens with the charges and lawsuits, Shannon says, “it’s not the end of Hull Street. Things are happening here, with or without them.”