Redistricting (historically code for disenfranchising blacks) is getting started again. But no one seems to care. 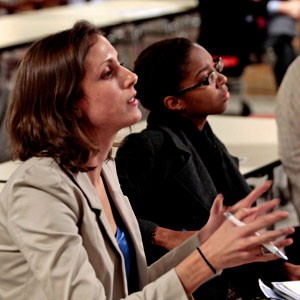 The court reporter was poised to type.

The TV camera was pointed at the podium.

The PowerPoint presentation was all cued up.

The Jan. 19 hearing at Lucille M. Brown Middle School was a chance for city residents to weigh in on redrawing the voter districts used in Richmond's mayoral, City Council and School Board elections. Redistricting, which takes place every 10 years, will adapt the shape of the city's nine districts so that each has an equal number of people.

More importantly, how the districts are drawn up will set the city's political course for the next decade. But no one seemed interested — in southwest Richmond, anyway. City General Registrar Kirk Showalter, City Attorney Tabrica Rentz and Steven Skinner, council's chief of staff, sat around a cafeteria table at 6 p.m., waiting for people to show. No one did, except a school custodian who asked if he could be on television.

“It's a tough sell. It really is,” Skinner says. He'd spent the last week sending out information on redistricting, managing to get dozens of local media outlets and neighborhood bloggers to mention the hearings. Satirical blog Tobacco Avenue even published a piece headlined, “City Begins Process of Redistricting, Whatever That Means.”

The first five hearings drew scant audiences. The best-attended was the Jan. 20 hearing at Thomas Jefferson High School, with 11 people (including three affiliated with City Council or the city administration).

That doesn't mean no one's paying attention, says Melvin Law, president of the Richmond chapter of the National Association for the Advancement of Colored People. “We're really more involved and more energized than attendance at the public hearings would indicate.”

People aren't ready to participate this early in the process, before any new district maps have been proposed, Law says. Richmonders will watch the city — and state — redistricting closely, he says, especially “persons who have been historically disenfranchised by the kinds of shenanigans gerrymandering can produce.”

Redistricting in Richmond historically has polarized the city along racial lines. When Richmond annexed a chunk of Chesterfield County in 1970, the city's 52-percent black majority abruptly shrank to 42 percent. Seven years of court battles ensued, seeking to resolve the issue of whether annexation had unlawfully diluted the voting strength of black voters.

The matter went to the U.S. Supreme Court. In 1977 the city adopted a district plan in which blacks would make up a majority in four of the nine voter districts. One swing district was evenly split between blacks and whites. Four white council members later traveled to Washington to the Department of Justice, charging that redistricting discriminated against white people.

“This is not 19th-century history,” says John V. Moeser, professor emeritus of urban studies and planning at Virginia Commonwealth University. To this day the Department of Justice must approve any redistricting plan proposed by the city because of Virginia's history of racial discrimination in voting rights.

City residents were fiercely focused on district lines when they were first drawn and redrawn, Moeser says: “Because this was new. And because racial tensions were so high. The stakes were high.”

Race now plays a smaller role in city politics, Moeser says, which is why interest in the process has waned. “We no longer have a white oligarchy that is angling to maintain its control,” he says, “which would make redistricting a highly charged process.”

Here's how it'll work in Richmond. The city doesn't have the new U.S. Census population data yet, so the matter at hand is what criteria to consider in redistricting: Should the lines avoid splitting neighborhoods? Should incumbents be protected? At the Jan. 20 hearing, Skinner says, attendees said they'd like to preserve school-zone and business-corridor boundaries in voting districts, if possible.

After hearing what the public has to say, council will adopt those criteria at its Feb. 28 meeting. Then, after the census data comes in, staffers will go to work with a new software program that draws up district maps. At a series of hearings in June, residents may look at the possible scenarios and put in their two cents. Council will vote on the redistricting plan in November, and then send it to the U.S. Department of Justice for review and approval. That department also will review the General Assembly's redrawn lines for Congressional and state legislature seats.

Henrico and Chesterfield counties are speeding up their local processes, because both have county elections this year. Henrico hopes to have a redistricting plan approved by April, General Registrar Mark J. Coakley says. Chesterfield Registrar Lawrence C. Haake III says he expects the county to set public hearing dates by April or May — “unless something weird happens,” he adds, like the General Assembly not approving an Aug. 23 primary date.

The NAACP will watch the proceedings carefully, Law says: “We're taking it seriously. We're not going to be asleep at the switch.”