Firehouse Theatre Project’s “The Elaborate Entrance of Chad Deity” wrestles with race relations through the ring. 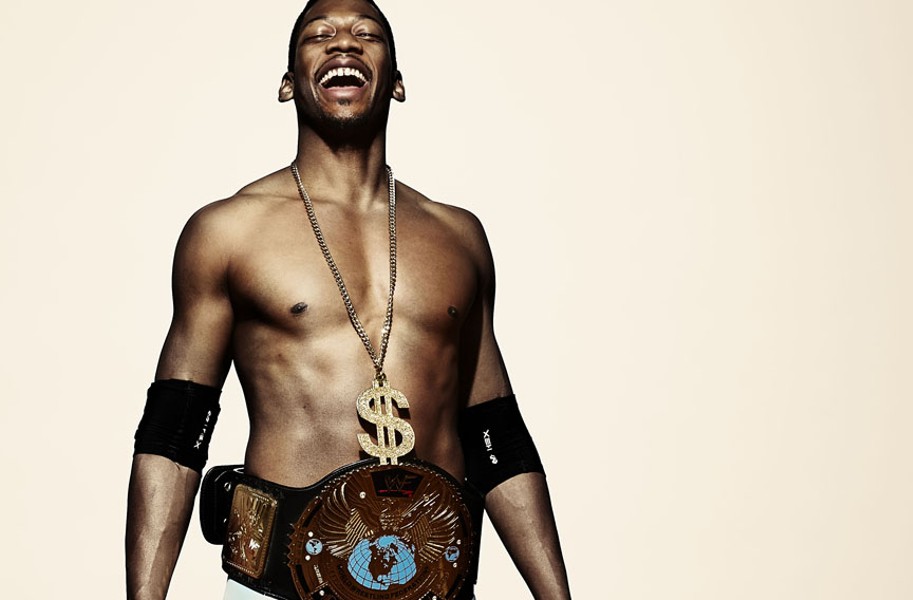 The man wearing a kaffiyeh falls to the ground to pray.

After seeing his wrestling partner get thrashed, he summons five men in ski masks who beat the stuffing out of his partner's opponent. As the Undertaker lies motionless, the man in the kaffiyeh straddles him, praises Allah, and then finishes the wrestler off with one of his signature moves, the camel clutch.

This exchange took place on an episode of World Wrestling Entertainment's "SmackDown," and was widely criticized for airing hours after the 2005 London bombings. The man in the kaffiyeh, who wrestled under the name Muhammed Hassan, was Mark Copani, who considered himself ethnically 100-percent Italian.

For playwright Kristoffer Diaz, this incident — and Copani's subsequent firing from the WWE — served as the impetus for his dramatic comedy, "The Elaborate Entrance of Chad Deity," opening next week at the Firehouse Theatre Project.

Through its examination of professional wrestling, the play satirizes views on race and ethnic stereotypes in America. In "Deity," an Indian-American from Brooklyn becomes a terrorist character called the Fundamentalist, whose signature move is the sleeper cell.

The show follows Macedonio "Mace" Guerra, who gets hired by a WWE-like company as a jobber, a person who loses matches intentionally to make other wrestlers look good. Mace is incredibly talented, but lacks the charisma of a star. Though it isn't necessarily because of his race, the Puerto Rican Mace is relegated to playing second fiddle to Chad Deity, the wrestling company's African-American star.

"Through the play, you see that talented people are tossed to the side," says Axle Burtness, who plays Mace. "There's one side of the wrestling world that everyone sees, and there's another side that only a few people see."

Like his character, Burtness grew up in awe of professional wrestling.

"Wrestling was actually one of the things that made me want to be an actor," Burtness says. As a kid, Burtness practiced his wrestling moves on trampolines with friends and was involved in dangerous backyard wrestling for a short period of time. To prepare for his role as Mace, Burtness watched about a dozen wrestling documentaries.

The entire cast has devoted one to two hours of every rehearsal to wrestling training, headed by former Richmonder and wrestler James Long. He began his wrestling career while working on his fine arts degree at Virginia Commonwealth University and was involved with Richmond Lucha Libre.

Long moved to Kentucky to get involved with Ohio Valley Wrestling, and was brought in as a consultant for a staging of "Deity" with the Actors Theater of Louisville. This is the fifth production Long has been involved with, and he says being in Richmond is like a homecoming.

"I'm putting these guys through a compact version of what I went through," says Long, who also acts in the show. "They're actors training to look like wrestlers. They can get there emotionally where we had to get there physically. I don't have to torture them."

The show's director, Kerry McGee, has known Long for years — they used to perform together with Richmond Lucha Libre.

"I was a professional wrestling manager character. I'd distract the refs — dirty, nefarious bad-guy stuff," McGee says. "He's been teaching these guys how to take bumps and do real wrestling moves."

Though Burtness says the ring in the show is much softer than the kind used in professional wrestling, that doesn't mean it's easy: "It does not tickle, I can promise you that. You're going to see a beautiful moment where I get power bombed."

For all of its high-flying spectacle, the show humorously tackles serious themes of race and its relationship with the American dream.

"I think it's a great microcosm of American in terms of race relations," Long says. "It really gives you something to think about, and it's in this great wrapping paper." S