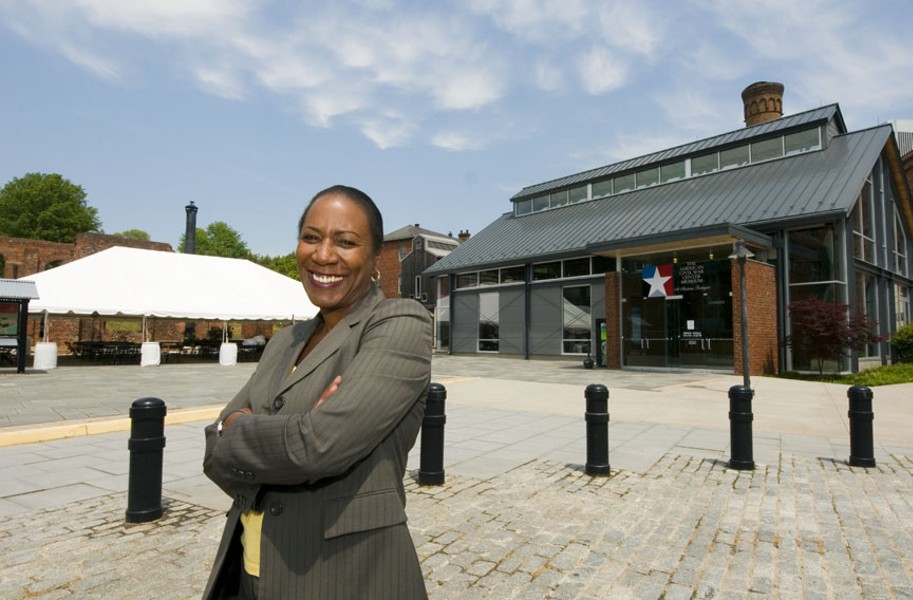 She's a rock star, as one local leader told us.

Coleman is having a big year in 2018, having just been named by Time magazine as one of the top 31 people changing the South. She's doing that in many ways, including leading a more inclusive vision for the American Civil War Museum, which will be opening a new $25 million building at Historic Tredegar next spring.

After receiving a certificate of occupancy in October, it'll be moving in over the next six months. "I'm ecstatic about the new space, it's fantastic," Coleman says. "Our philosophy moving forward is fullness in narrative." Noted documentarian Ken Burns has even agreed to be an honorary chairman for the grand opening and Coleman says an even bigger national figure may also be involved.

This year Coleman also served on Mayor Levar Stoney's Monument Avenue Commission, which recommended that the Jefferson Davis monument be removed and signs be added to other statues. "I'm extraordinarily proud of that work," she says. "It is a reflection of active listening, scholarship, best thinking from the community and the group. To bring all of that together is important for our community and as an example to others."

She's doing lots of national speaking engagements and has only seen her demand increase after the Time article. An eloquent spokeswoman, she is a much-needed African-American voice in the field who, as the Time article notes, "has found herself at the museum's helm during a moment of national reckoning on its subject."

Like powerful families the Markels, Thalhimers or Reynoldses, the Royalls could be on the arts and culture power list every year for all they do as art collectors and generous supporters of artists and art organizations. They get the nod this year primarily for funding a new three-year, family curator position at the nonprofit 1708 Gallery, one of the longest-running artist-founded spaces in the country and a lynchpin of the Broad Street Arts District. Park Christopher Myers was named as the Royall family curator for 1708 Gallery, which will mark its 40th anniversary this fall.

"Pam and Bill's support of this position was visionary," says Executive Director Emily Smith, noting that the hiring underscores a decades-long commitment to an artist-centered, community-engaged vision. "[It] strengthens 1708's mission to help artists realize new and exciting, ambitious and provocative projects that in turn excite and inspire our community."

Janet Starke, executive director of Virginia Commission for the Arts

A Chesterfield County native, Starke was recently appointed by Gov. Ralph Northam to serve as executive director of the state agency that supports the arts through funding from the General Assembly and National Endowment for the Arts – often helping keep the lights on with its unrestricted funding for operations support. She just started the job last week and comes in at a time when the agency has received a rare $250,000 funding increase after a couple years of cuts to every state agency.

Starke leaves a job as executive director of Richmond Performing Arts Alliance, still known to many as Centerstage, since November 2015.The main thing she did there was re-brand the organization as Dominion Energy Center for the Performing Arts, while working hard to position the alliance as an advocate and key partner with the 11 resident companies. "Our original charge was to bring in nontraditional audiences," she says, noting it has moved back into the First Fridays' programming and will be kicking that up again in September. These free events hope to increase access for a wider audience.

Although he's been an oral and maxillofacial surgeon for 30 years, Harris is no stranger to major local arts groups. After serving on the board of trustees at the Virginia Museum of Fine Arts for five years, he was elected president July 1, the first African-American to hold this position in the 82-year history of the museum.

"I am proud of being a part of expanding the audience for the arts here in Richmond and making that audience more diverse and inclusive," says Harris, an avid art collector with a vast collection of African and African-American art.

But his work on boards doesn't stop there: He is past president of the board of Virginia Repertory Theatre, board chairman of the Black History Museum and Cultural Center of Virginia and serves on the board of the American Civil War Museum.

Like any strong board leader, Harris has the power to make connections, raise money and lead on issues that are crucial to our premiere arts and culture organizations.

In his 16th year with the Symphony, Fisk oversaw a record breaking 60th anniversary season, a Festival of the River on Brown's Island with more than 10,000 attendees — another 20,000 turned up in Henrico Country for a mobile big tent concert on the Fourth of July — and was part of the leadership team that won the bid to bring the International Menuhin Competition for Young Violinists to Richmond in 2020. If you're unfamiliar with that, just consider it the Olympics of violin playing.

In addition to this busy schedule, he served on the board and as advocacy chairman for Virginians for the Arts, which successfully lobbied for a rare increase in the Virginia Commission for the Arts' budget. Fisk was also on the WCVE Public Radio Community Station board and chairman of the resident association of the Dominion Energy Center and Altria Theater, which represents the nonprofit arts groups that use the two facilities. Like a cascade of notes from an orchestra, he was everywhere.

The new kid on the block, the Institute for Contemporary Art, received a lot of national attention when it opened to large crowds on April 21. As chief curator, Smith is responsible for setting its artistic vision.

For the opening exhibition, "Declaration," she intentionally mixed work by international and Richmond artists, as well as commissioning major new works.

"We've also leaned into intense conversations," Smith tells Style. "The ICA is starting to become a space for discussions that need to happen here and now. That's crucial. I believe in the transformative power of art, and that means reaching beyond the art scene." She also gets props for hiring local Enjoli Moon, known for the Afrikana Film Festival, as the museum's film curator.

With the closing weekend of "Declaration" packed with programs featuring the artists, the institute will open its fall exhibitions Oct. 17, which it hopes will build on the attention and help position the new institute as a player on the national scene.

"The ICA will feel entirely different — that's one of the exciting things about working in a space like the ICA," Smith adds. "There will always be something new to experience here. And I really can't wait to see where we are in one year, or five years, as we continue to build a program that is grounded here and connected to the world."

The Valentine went to its board for three special meetings after the Charlottesville tragedy to quickly come up with a monument exhibition, "Monumental" in only six months, as well as a related program for fourth-graders.

"If there's one year that I'm proudest of at the Valentine, it would be this one," says Martin, who is approaching 25 years with the museum. He notes that the organization is finally settled into its new galleries and is seeing increased attendance. "We're trying to elevate the importance of history — whether the issue of monuments, disease, women's fashion, or how we deliver health care. For example, the notion that Maggie Walker protested the care of [African-American] people who were not getting flu treatment — forget about the banking."

The Valentine has been ahead of the curve in terms of diverse programming with past exhibitions exploring local Latino culture and LGBT family issues. This year, it delved into the power of women's local fashion through history, and its exhibit on pandemics that Richmond faced was not just a historical look back, but also included a blood drive and flu shots, as well as information from local public health groups that had more than a few local teenagers taking away knowledge about sexually transmitted diseases.

Martin's powerful vision for connecting people with a more diverse and socially driven history deserves to be recognized, especially this year.

A New Jersey transplant, Shaw is the visionary behind one of central Virginia's largest theater companies and its ongoing institutional growth. This year, he directed the world premieres of "The End of War" and "River Ditty" and produced two new works, "Atlantis" and "In My Chair" (co-produced with Cadence Theater). A former associate choreographer on Broadway, where he worked on the Tony winner "Once," he's still got a pipeline to New York, meaning he's able to engage nationally recognized commercial producers, playwrights, composers and directors to come to Richmond —providing our amazing little theater scene with more top-notch exposure.

He's also elevating the role of dance in Richmond theater by fostering a collaboration with the Richmond Ballet and earning raves and award nominations for this year's production of "West Side Story." He clearly knows the value of partnerships with Richmond's major institutions, including Virginia Commonwealth University, from which he hired 30 students and professionals this last season. The future for Virginia Rep looks bright.

Garka oversees the CultureWorks grants program, a valuable resource for local artists and art organizations that has invested more than $778,900 in the local community, mostly to nonprofits since 2010. It made almost $73,000 in Cultural Equity Grants in 2018 and is striving to increase the impact of this new grants program by adding more corporate and foundation investors.

Also he says he is helping to continue momentum for an Artober event and plans to expand its reach this fall through a partnership with the Better Housing Coalition to bring arts experiences into their communities.

But a big part of his job is sharing the impact of the arts with local elected officials and government representatives so they understand why it's important. He pushes the results of a study that CultureWorks led with Americans for the Arts which showed that nonprofit arts and culture is a $360 million economic engine for the region.

"We believe this contributed to a 30 percent increase from the city in operating support for FY19 provided to 13 nonprofits through the arts and cultural funding consortium managed by CultureWorks," Garka tells Style. "Henrico County also similarly increased its funding for the consortium and Hanover County provided a modest increase."

This year, the Valentine and Capital Region Collaborative named CultureWorks a 2018 Historymaker for shaping the region's quality of life.

With her first show this fall being a retrospective of elder African-American artist Howardena Pindell, Oliver is making a statement right off the bat: One of her primary missions as the new curator of modern art will be to add diverse voices to one of the city's oldest fine arts institutions. One of the few African-American women curators at a major museum, her presence alone serves as a powerful example.

Having spent 16 years at the Contemporary Art Museum Houston, Oliver is well-versed in living in a large, diverse city and she told Style in a recent cover story that she sees similarities and differences between Richmond and Houston.

"In terms of dialogue about race and representation, I think [Richmond] is ahead of the curve in its willingness, its frankness to have this conversation," she said. "In larger cities, I think issues of race, racism and identity tend to be conflated with economics, or other issues, and there seems to be a reluctance to examine [identity] independently."

We can't wait to see what other plans she has for future exhibits.

Back to The Power Issue