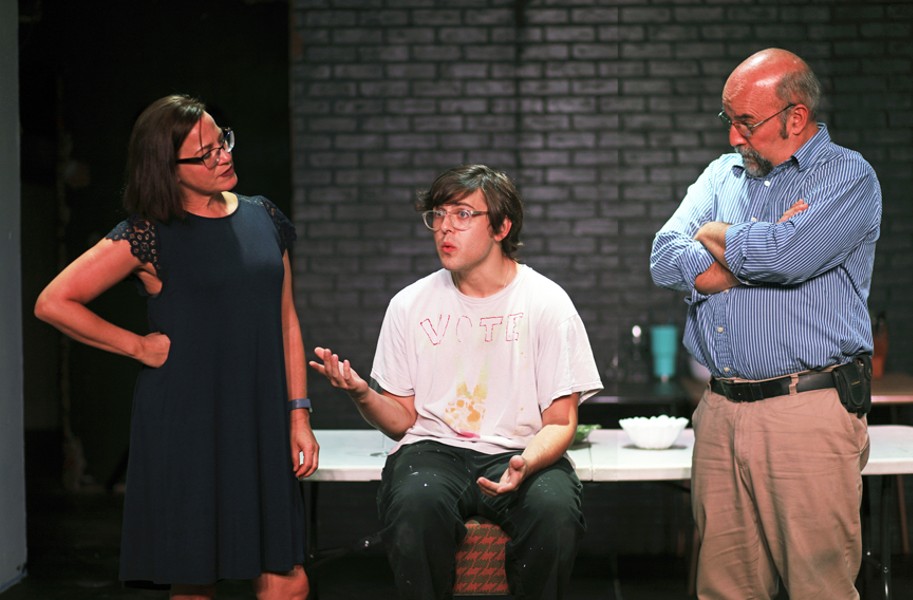 The cast and crew of TheatreLab's "Admissions" have been talking a lot about race and privilege, lately.

"This is a play that directly questions liberal white America and how we actually feel about race," director Deejay Gray says. "And on the first night of rehearsals, we just talked. We all just opened up and started a dialogue about race and white privilege."

"Admissions," from playwright Joshua Harmon, who also wrote "Significant Other" and "Bad Jews," both of which have been staged at TheatreLab, takes place at Hillcrest, a New England prep school. Head of admissions Sherri Rosen-Mason (Donna Marie Miller), and her husband, the Headmaster (David Clark), have made it their life's work to diversify the school.

They believe themselves to be well-intentioned white people on a mission to make the academic admissions process a fair one for students of all racial and socio-economic backgrounds. But their own values and beliefs are called into question when their son, Charlie (Tyler Stevens), doesn't get into the Ivy League school of his choice, but his friend, who is mixed race, does.

"It's really about white privilege, white fragility and white saviorism. It's about that line between the personal and the political, and how do you navigate that when you want to be a force for good in the world," says actress Sara Collazo, who plays the parent of one of the kids whose future may be impacted by the decisions of college administrators.

The play's two major settings are Sherri's office at the school and Sherri's home. This spatial delineation onstage illustrates the line between the kinds of conversations one might have in public versus those that take place behind closed doors.

"One of the things we've really been talking about a lot in rehearsals is the idea of home conversations and the dialogue you have with your family in the safe space of your home," Gray says. "Where you can maybe talk about issues like race in a way that you would not speak about it publicly."

He adds that the play's title refers not only to the academic admissions process, but also to the things we may or may not admit to ourselves and to others: The admissions we may make privately that we would never want to be made public.

Collazo says she's been noticing these issues more clearly in her daily life since beginning rehearsals. "It reminds me of the conversations about rezoning in the Richmond Public Schools," she says. "These can be very racially charged conversations."

Controversies surrounding the fairness of college admissions have also made big headlines lately with the revelation that celebrities like Lori Laughlin may have resorted to bribery to get their children into the college of their choice — taking up spots that would have otherwise gone to more deserving students.

"Admissions" is the first show in a season dedicated to the theme of power and privilege. Gray says there's no better place to start. "Admissions" deals with difficult and uncomfortable truths, but it does so with humor. There's value, Gray says, in being able to laugh at yourself, to exist within the awkwardness or tension of an uncomfortable moment, and hopefully walk away with a new awareness or understanding.

"It brings to light things that, due to my own white privilege, I hadn't even thought about," Collazo says. "This play asks its audience, 'What do you stand for and how much are you going to hold yourself to it?' I think that's what white America needs to hear." S