As social media has grown into a dominant mode of communication, the power of local activism has risen with it.

Rallies, protests and boycotts can be arranged with a few clicks of a button. Activists use their individual and collective voices for social justice and environmental causes, keeping issues in the media and occasionally hitting corporations or local businesses where it hurts: their pocketbooks.

No longer must they rely solely on traditional coverage to get their messages heard. But local activists will tell you the most effective and sustained movements are still the ones with boots on the ground. It follows that the place to locate power within the local activism world, according to longtime activist Phil Wilayto of the Virginia Defenders, is by looking at mobilization skills.

Wilayto and his wife, Ana Edwards, publish the Virginia Defender and have a consistent and early record of campaigning for the preservation of heritage sites in Shockoe Bottom, as well as being an early voice against Confederate monuments, police misconduct and poor jail conditions. But this year, he says, the most effective coalition was started by an out-of-towner, Princess Blanding, sister of and spokeswoman for the family of Marcus David Peters, a teacher shot and killed by a Richmond police officer May 14 while naked and suffering a mental episode on the highway.

"The issue has struck a nerve, but it's really the level of organizing. And we're part of that," Wilayto says, noting that there has been a meeting of more than 500 people at Second Baptist church, a similar-sized march and continual family presence at public meetings, with another mass march planned for Oct. 13.

"It's a dynamic campaign. They have a list of five demands including getting the cop indicted, transparency in release of information regarding police training for dealing with people with mental issues, a Marcus alert set up like an Amber alert, and an elected civilian police review board with subpoena powers."

Wilayto's group consists of 20 member volunteers and he's working to increase the social media presence of his publication. He says that local nonprofit groups, while doing helpful work, have skewered the whole concept of activism.

"Their funders determine the framework. One of the things you'll never find is a liberal nonprofit group taking on issues of war and peace, because they're all sympathetic or tied into the Democratic Party, which doesn't want any discussion of that," he says. "The peace movement has gone into a tailspin."

The first thing Wilayto ever did as an activist, when he was 18, was marching against the bombing of North Vietnam. "[Today] I've never seen such little interest in international issues," he says. "We're developing a very nationalist-oriented progressive movement — which is not progressive." 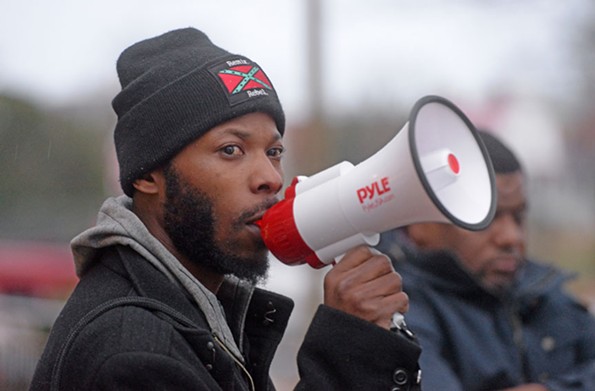 Some other important and visible activists in 2018 include Arthur Burton and Omari Al-Qadaffi of Kinfolk Community Empowerment (fighting for improved conditions from Richmond Redevelopment Housing Authority), Jamshid Bakhtiari, Virginia field organizer for the Chesapeake Climate Action Network (Atlantic Coast Pipeline), Kimberly Rolla, a lawyer with the Legal Aid Justice Center (providing support for different campaigns), ICE out of RVA, and Ana Edwards, who was instrumental in getting the National Trust for Historic Preservation to give $75,000 to Preservation Virginia for a two-part study on the economic viability of a memorial park in Shockoe Bottom. This could be a game-changer for one of the longest running community struggles in the city.

"The heart of local politics is real estate," Wilayto says regarding the Shockoe Bottom issue. "There are people who want that for profit-generating projects, and people who want it for memorialization. This new study can demonstrate there will be money generated for the benefit of the city as a whole, just not for downtown developers."

Back to The Power Issue