Pour One for Peter

Scott Elmquist The cellar at Monticello where ale was stored. Jefferson’s early designs for the mansion included spaces for brewing and storing beer.

The American dream is a narrative built on biographies of people with grit who find success without the aid of means. Instead they’re armed with smarts, perseverance and luck, so the stories go. But usually omitted is the acknowledgement of barriers to success shared by the disenfranchised, whose accomplishments are often absent from the historical record.

One such individual mostly omitted from history is Peter Hemings, a slave who served as Thomas Jefferson’s head brewer, his tailor and chef. It’s possible that Hemings is America’s first black craft brewer, says Lee Graves, a local beer historian, author and former Richmond Times-Dispatch reporter. Hemings was an elder sibling of Sally Hemings, an enslaved woman impregnated by Jefferson, a fact once vehemently denied by many. But as a man regarded as property, Hemings is mostly known to us through Jefferson’s correspondence and the former president’s meticulous note taking about the goings-on at Monticello.

His story is not unusual: The enslaved are often understood through the context of passing references from those in power, or as assets recorded in farm ledgers. This obscures black contributions to the making of America, says Gayle Jessup White, community engagement officer at Monticello, Jefferson’s main plantation near Charlottesville. The Henrico County resident is the three-times great granddaughter of Peter Hemings and a descendant of Jefferson through another ancestor. Today she works with historians to bring the story of Hemings and other enslaved men and women down from Jefferson’s “little mountain.”

“There’s a story there for all of us,” White says. “There’s a story for the African American community, that our ancestors’ lives and functions on that mountain —and they were very valuable lives — that we contributed to the country that America is. America is built on the backbone of enslaved people.”

During Black History Month, getting to know Peter Hemings is a good start for recounting an accurate, inclusive history of American brewing, and a step toward acknowledging minority contributions to establishing American industries. As the still overwhelmingly white business of craft brewing continues to grow, brewers in Virginia are poised to consider ways to increase the number of industry workers and beer drinkers of color.

The increasing diversity of the U.S. demands historians strive to uncover marginalized voices. And what’s a better moment to strengthen bonds and share stories than over beer?

Jefferson once described Hemings as a “servant of great intelligence and diligence,” which he noted were necessary to master the science of brewing, in an 1821 letter to James Barbour, a U.S. statesman and namesake of Barboursville He was answering a request by Barbour for the recipe to reproduce an ale enjoyed during a visit to Monticello.

The year prior, Jefferson wrote to James Madison inviting him to send a slave to receive instruction from Hemings, who is “uncommonly intelligent and capable of giving instruction if your pupil is as ready at comprehending it.”

One wonders how far Hemings’ intelligence and diligence would have taken him in today’s craft brewing industry, where skill and creativity is important due to ever-shifting palates. But Hemings’ contributions and those of other slaves to American brewing traditions are obscured by the tall tales of the founding fathers brewing their own beer, an arduous task most certainly undertaken by slaves, writes J. Nikol Jackson-Beckham, a professor of communications at Randolph College in Lynchburg, who studies beer in American culture.

“That’s about as easy to imagine as ... George Washington bent over to sow tobacco seeds in the fields at Mount Vernon,” she writes in her article “Missing Ingredients — the (Incomplete) Story of Thomas Jefferson’s Unsung Brewer.”

Hemings learned malting and brewing from Capt. Joseph Miller, a British brewmaster who left England during the War of 1812 to conduct business related to his family estate in America. After befriending Jefferson and an extended stay at Monticello, Miller agreed to teach Hemings, who served as Jefferson’s chef. Prior to Miller’s arrival, Jefferson’s wife, Martha Skelton Jefferson, maintained small homebrewing operations at Monticello earlier in their marriage and prior to her death in 1782. Miller’s tutelage of Hemings, who took over the supervision of malting and brewing, greatly increased production at Monticello and introduced ale, a stronger beer with a longer shelf life.

Ale was the preferred table liquor at the multicourse dinners that reflected Jefferson’s love of haute cuisine. Monticello’s high-ceilinged dining room, painted chrome yellow in the fashion of the Federalist era, was the nucleus of hospitality for friends, family or visiting dignitaries. Back home from his diplomatic visits to France, prior to his presidency from 1801 to 1809, Jefferson fostered conversation with guests gathered at small tables, en lieu of place settings at a long, rectangular table that isolated chatter. Unseen slaves employed dumbwaiters that opened on either side of the fireplace to bring wine up from the cellar and placed food on the shelves of a rotating door in an adjoining hallway before service.

But more than relaxing moods and complimenting dishes, beer served the practical purpose of satisfying thirst due to the lack of clean drinking water, making Hemings’ role doubly important. Hemings brewed 100 gallons of ale every spring and fall, then regarded as the best seasons for malting and brewing. To accommodate higher volume, a brewhouse was operating at Monticello by fall 1814, the location of which is currently unknown. Hemings also had begun malting Jefferson’s grain, so he no longer had to purchase malt from his neighbors.

Prior to brewing, Hemings served as head chef, having learned French cookery from his older brother, James Hemings, who previously held the role. Jefferson had arranged for the elder Hemings — who should be lauded for his unsung contributions to American cuisine, according to food historians — to be trained in France. Jefferson freed James Hemings in exchange for his preparing a replacement who could cook to the presidential foodie’s satisfaction. His love of Hemings’ food can be seen in a letter sent by Jefferson to Monticello from the president’s house: “[D]irect us here how to make muffins in Peter’s method. My cook here cannot succeed at all in them and they are a great luxury to me.”

Hemings worked as a tailor in Charlottesville following Jefferson’s death in 1826. The following year, he was placed on an auction block alongside 130 fellow slaves when Jefferson’s estate was liquidated to pay off massive debts. A period newspaper advertisement stated that the auction — which heinously ripped families apart — may have placed for sale “the most valuable [slaves] for their number ever offered at one time in the State of Virginia.”

Due to his talents as a chef, brewmaster and tailor, Hemings was appraised at $100 despite his 57 years. A man who may have been his nephew, Daniel Farley, was able to purchase him for a dollar. Some historians note the price may have indicated that bidders honored his family’s desire to purchase his freedom.

Gayle Jessup White agrees with this interpretation of her ancestor’s story, describing it as a “gentleman’s agreement among white, potential purchasers who would not bid on him.”

“Working in the kitchen together, one brother to be free and the other to remain a slave until he was sold on the West Lawn to another relative … when I think of the dignity of that man, I think of my own father, who was an extraordinarily dignified man,” White says.

Given the power dynamics of the time, one wonders how much creative agency Hemings had as brewmaster. It’s likely that he had a degree of independence but was bound by Jefferson’s taste and what ingredients could be found at Monticello and beyond at any given time, says Niya Bates, a historian at Monticello. Hemings would also have used recipes given to him by his teacher, Capt. Miller, she adds.

“There is a bit of creativity on Peter’s part when working with the materials they have on hand and working with various recipes,” she explains. “But I don’t think there’s an exact science to it either. … I wouldn’t say that from year-to-year, the recipe was the exact [same] thing, in the way that beer is produced today.”

“Jefferson was well-known for being a stickler for just about everything. … He was very curious, very demanding and he likes stuff to be to his specifications,” Graves says. “But I would also think that Peter had a little bit of flexibility in that, too.”

Sadly, no written recipes exist from Jefferson or Hemings. It’s likely Hemings was literate, as was his brother, but we do know Jefferson “did not tolerate insipid beer,” Graves writes in his article “Time to Raise a Toast to Brewer Peter Hemings.”

Jefferson preferred a ratio of a bushel of malt to every 8 to 10 gallons of “strong beer, such as will keep for years.” The beer lover also noted that the public brewery practice of producing 15 gallons for every bushel of malt “makes their liquor meager and often vapid.”

Spruce and molasses were prime flavoring ingredients, according to the style of the time and their availability at Monticello, historians say. For malt, Jefferson directed the use of wheat and then corn, instead of barley, due to plant diseases and the grain’s poor adaptation to Virginia’s climate. The substitution would have given Monticello ales a lighter color and flavor than ales prevalent at the time, Graves says.

Jefferson obtained his hops from various sources, including purchases from his own slaves. At Monticello and across the South, slaves sold garden produce, poultry and other items to their masters and used the money to purchase goods from local merchants. Slaves cultivated their own crops on Sundays or during the evening guided by, as oral tradition states, flame fed by animal fat in cast iron pots and pans. One such enterprising slave named Bagwell sold Jefferson 60 pounds of hops for $20, the equivalent of roughly $800 in today’s economy.

Graves speculates the slaves may have augmented their hop harvests with wild hops that were native to Virginia. One thing is certain: These early craft brewers demonstrated impressive economic self-determination, despite the confines of the plantation system.

But appreciation of Hemings in the world of craft brewing surely would not have happened in the absence of a greater emphasis on slavery’s role as the economic engine of Monticello and other Southern estates.

Before the mid-1980s, slavery wasn’t mentioned during tours of Monticello. Archaeological work in the 1960s was an initial step toward recognizing black life at the plantation, and historians have gradually increased public acknowledgment of the dignity and roles of enslaved individuals. An excavated beer cellar, staged with corks, clay bottles and artifacts, gives visitors a look at the life of Hemings, as does a small living quarters near the kitchen where he cooked.

Emphasis on Monticello’s black history really took off 26 years ago due to the Getting Word Oral History Project, which featured archived interviews of 170 descendants of Jefferson’s slaves. Most recently, the critically acclaimed traveling exhibition “Slavery at Jefferson’s Monticello: Paradox of Liberty” focuses solely on humanizing the 607 people known to have been enslaved at Monticello, who have been largely left out of history. The exhibition debuted in 2012 at the National Museum of American History, in collaboration with the National Museum of African American History and Culture and the Thomas Jefferson Foundation at Monticello, and is now on display in Richmond at the Black History Museum & Cultural Center of Virginia until April 18. 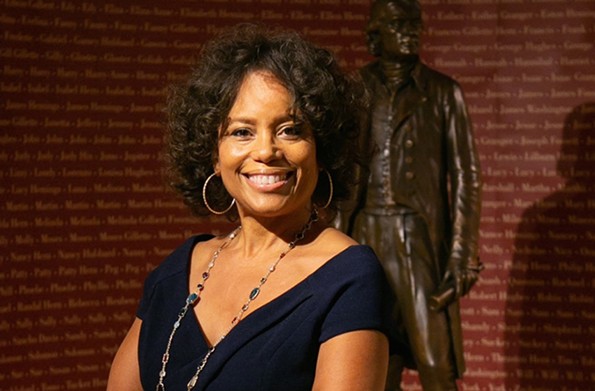 White says she will continue the work of remembering her three-times-removed grandfather and other formerly enslaved Americans.