Pot or Potpourri: What is Fake Pot Anyway? 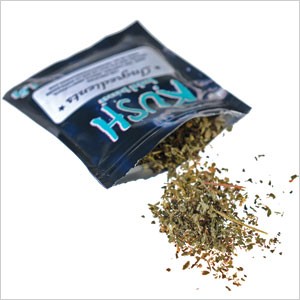 Synthetic marijuana has been a favorite target of the General Assembly this session; on Feb. 7 the House of Delegates passed a bill that seeks to make it illegal.

A 1.5-gram packet of Kush Herbal Incense — which costs $26.24 — contains a perfume-smelling mix of lemon balm, Indian leaf, passionflower, wild lettuce and supposedly a legal chemical that may or may not induce a marijuanalike high.

“It's not really synthetic marijuana,” explains Aron H. Lichtman, professor of pharmacology and toxicology at Virginia Commonwealth University. “It's a chemical created by scientists to try and understand how marijuana's active ingredients work.”

The chemical, known as JWH-018, was first developed 15 years ago for medical purposes by John Huffman at Clemson University and researched by the pharmacology department at VCU. “John Huffman made the compounds and sent it up to VCU,” Lichtman says. “They tested it in mice. They didn't assess it for safety on anything else.”

By mimicking tetrahydrocannabinol, the narcotic produced naturally in marijuana and known as THC, researchers hope to gain ground in new medical treatments and insights into how cannabis affects the brain. “We know a lot about the active ingredients of marijuana, such as THC. We don't know anything about how these other compounds break down,” Lichtman says. His own recent contributions to the research include the development of a special inhaler that vaporizes liquid THC.

The reason for the recent heightened interest in K2 is unclear, says Roger Roffman, a retired University of Washington professor of social work who has studied marijuana extensively. The idea of a legal, novel alternative to pot proved attractive, Roffman says via e-mail: “People concerned about being caught during drug testing presumably believed they could avoid prosecution.”

Not for long. If the state Senate follows the House of Delegates, possession of more than half an ounce of synthetic marijuana would be a misdemeanor, punishable by a mandatory minimum sentence of 60 days in jail. But the issue may not be simply resolved by passing a bill.

Even if the state bans the sale of spice, overseas labs will continue producing similar products that are obtainable online. “There are hundreds of other compounds that were made for research purposes to try and develop medications,” Lichtman explains.