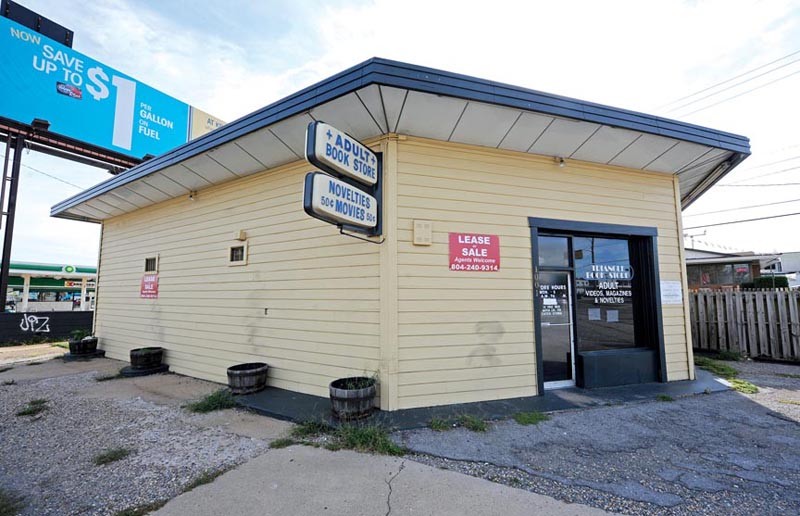 A hoary adult bookstore that long was a North Boulevard fixture has been sold, leaving its neighbors to wonder what will happen to the building.

You couldn’t miss the Tri-Angle Book Store, which occupied a squat yellow building at 1001 N. Boulevard. Its plastic signs hawking novelties and 50-cent movies greeted drivers traveling to and from The Diamond and interstates 64 and 95.

A new owner is under contract to buy the building, says Mike Krumbein, president of Richmond Mortgage Inc. Krumbein couldn’t say what the purchaser planned to do with it. According to city records the property, built in 1950, was foreclosed on in January. (“Boy, nothing is recession-proof,” cracks Scott’s Addition real estate broker Scott Douglas.)

The Tri-Angle bore little resemblance to Richmond’s bachelorette-friendly, couples-focused adult shops, such as Taboo, Priscilla McCall’s and Kiss and Make-up. A curious few who ventured inside describe a cramped, dingy and harshly lighted place, walls lined with racks of dusty videos. Toward the back, a line of men waited their turn to enter small rooms where adult movies played. The two featured movie titles were written on a white board: one for rooms 1 through 4, one for rooms 5 through 8.

Alison Barber, owner of Taboo, says she’s heard Tri-Angle had been struggling for years. With overpriced toys and movies and a 1970s vibe, it had become “a dinosaur of the industry,” she says.

The bookstore closed in the beginning of August, says Charlene Cooper, owner of the nearby salon Clippi Headren. But it still gets customers. She says the salon staff has been giggling while they watch men try to go inside, unaware the shop is closed, and then sneak back to their “clandestine parking spot.”

The building’s an essential piece of the Boulevard’s redevelopment, Cooper says: “I want something good to go in there, like a coffee shop or something.” At a community meeting City Councilman Charles Samuels held in February to discuss the future of North Boulevard, other local business owners expressed a wish for Tri-Angle to become a Starbucks, or a bookstore of the nonadult kind.

The follow-up meeting about the community’s vision for the Boulevard is scheduled for Thursday, Sept. 22, at 5:30 p.m. at the Hermitage on Westwood Avenue.