Local filmmakers give birth to an “Antihero.” 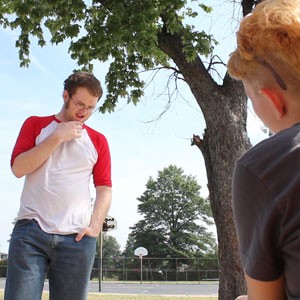 One of the cool things about independent filmmaking is that it can happen anytime, anywhere. Just last summer, bartender and short filmmaker Joseph Weindl wrote, directed and shot a full-length feature film in Richmond on a low budget. This infectious new film, due for a screening at the Byrd this week, is titled “Antihero.” It tells the fictional tale of a two bike-riding busboys who burgle their way through town.

For locals, the theme may conjure memories of a real Richmond-area anti-hero from the mid-1980s, a bike-riding punk rocker with multiple piercings in one ear and half a Mohawk. This modern day Robin Hood stole from banks in order to treat his friends to outrageous nights on the town (although he claimed the money came from an inheritance).

But director Weindl, who was living elsewhere in the mid-'80s, maintains his script has no basis in reality. “The idea came about from a brainstorming session with co-workers waiting tables,” he says. “The initial concept was to make a super hero out of an absolute nonhero … a petty thief, a loser alcoholic.”

Actor Joe Carlson, who plays the Antihero's sidekick, Weezie, describes the movie as “a bawdy, comic adventure following the exploits of two semialcoholic petty thief busboys, Pork Rind [played by Brian Gartland] and Weezie. ... It is a whirlwind of Billy Dee [Williams], Colt 45s, bikes, PBRs and summer high jinks. I even got to jump off a bridge.”

Like most independent films, “Antihero” was made for peanuts. The nonsalary production costs were less than $1,000. All the money came from tips from tending the bar on weekends at TJ's. “'Antihero,' you could almost say, is being funded by the customers of the Jefferson,” Weindl says, laughing.

Part of what makes low-budget filmmaking accessible is the availability of inexpensive, high-quality equipment. “Antihero” was shot with a T2i digital single lens reflex photography camera, which is major trend in independent filmmaking that's seeping into the mainstream. “It shoots video very well and it is very inexpensive,” the director says. Scenes in mainstream films such as “Iron Man 2” and “Black Swan” (not to mention the season finale of the TV show, “House”) were shot with similar cameras. Weindl edited the film on an $800 computer he purchased just for the project.

Like other indie filmmakers, Weindl plans to submit “Antihero” to several film festivals in hopes of gaining some recognition and building a reputation. “The main goal is to use this to get a job and or funding,” Weindl says. “If we get distribution, that would be cool.”  S

“Antihero,” written and directed by Joseph Weindl, starring Brian Gartland, Joe Carlson, Nicole Carter and Ryan Asher, with an original score from Ryan Corbitt and Trey Pollard, will be screened  at the Byrd Theatre on Tuesday, Jan. 25, at 7 p.m. Tickets are $5. For information go to http://www.Antihero-Movie.com.