Ron Howard takes a look at the mating game in “The Dilemma.” 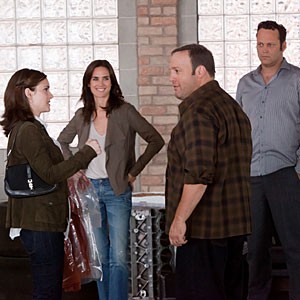 Vince Vaughn, Queen Latifah and the guy from “Mall Cop” in a movie trailer — especially the kind of trailer made for “The Dilemma” — might immediately suggest vanilla comedy. But it's clear that “The Dilemma,” about a guy torn over telling his best friend about an infidelity, is at least an attempt to be something more substantial.

For one thing it's directed by Ron Howard, not some person you've never heard of, who's working as he usually does with his longtime producing partner Brian Grazer. It's also, if not timely and topical, an effort to entertain by delving into the kinds of everyday experiences shared by the audience. The movie is like their version of a Judd Apatow film, a look at relationships in 2011 through a crowd-pleasing, star-studded vehicle. The problem is that though these older stewards of Hollywood deal making might mean well — and of course they might, in fact, not — “The Dilemma” feels like something they've co-opted to capture a market, not something from the heart.

Something as down-to-earth and universal as friendship is what's at stake, and “The Dilemma” begins by establishing the relationship between Ronny (Vaughn) and Isaac (Kevin James), entrepreneurs in the automotive industry who are trying to get Chrysler to bite on their latest idea, a cross between an electric vehicle and a muscle car. Ronny is the glad-handing salesman of the duo, and Isaac is the brain. If you can't figure that out on your own from the interplay between the two — and the casting, for that matter — the movie explains it explicitly several times, including when Latifah, as the men's Chrysler rep, says something to the effect of “Ronny you're the mouth and Isaac you're the brain.” “The Dilemma” has a little difficulty when it comes to subtlety.

Nowhere is this clearer than in the title, which sounds more like a working title meant to convey the concept to busy executive producers. Ronny and Isaac are on their way to success when they hit a snag. Pressured by Isaac and his wife, Geneva (Winona Ryder), to marry his longtime girlfriend Beth (Jennifer Connelly), Ronny is working out the details of his proposal at a botanical garden when he spots Geneva making out with a tattooed younger man, Zip (Channing Tatum). The big moment arrives as obviously as possible. The music grows ominous, and Vaughn (not really Ronny at this moment) begins to act like a bear that just got a whiff of a garbage truck.

His double-takes throw our gaze onto Geneva and Zip, canoodling across the way in full view of the horrified Ronny. Pantomiming and silent comedy take over as Howard finishes his big scene with visual exclamation marks. Ronny slips in the bushes he's spying from. And not just any ol' bushes, as the gardener (played by Howard's brother, Clint) informs Ronny, but poisonous ones. Anyone not sent into howls of laughter by the poisonous plant bit and the subsequent health repercussions might justifiably find time to ponder an equally important dilemma, which is “Why do I care whether he tells him?” It haunts the movie.

Vince Vaughn can carry a scene about nothing, which is what he's able to do with Ronny a lot of time. With his trademark conversation patter, he puts the zing in an early dinner scene and keeps the inevitable boardroom meetings from devolving into boredom. He's definitely the movie's mouth, but unfortunately there are no real brains to fall back on. Even Vaughn can't carry an entire movie about nothing.

After a lifetime in movies, Howard and Grazer know the business. That's probably why the most realistic part of “The Dilemma” is the Chrysler bit. What are the odds that it was concocted for the sake of a high profile product placement? Was Latifah cast in her role because her part was integral, or because her presence checks off a test-marketing box? What do Howard and Grazer believe in?

Their instincts are way off when it comes to making people care anymore. “The Dilemma” could have had the same cast, but needed a shift away from what happens toward why what happens, happens. Yes, you might lose the scene of Vaughn and Tatum going at it with baseball bats and lighter fluid, but you might gain important information about marriage. Does it remain a viable tradition, for example, or at least a viable movie subject? (PG-13) 118 min.