In the run-up to Gwar B-Q, the owner of Hadad’s Lake reflects on the classic party spot’s long history. 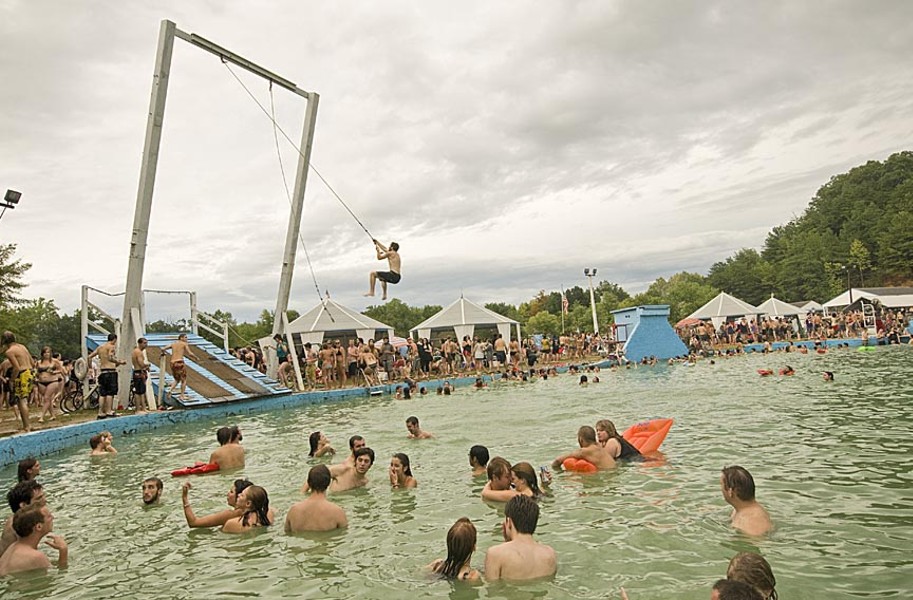 Ash Daniel Hadad’s Lake on Osbourne Turnpike in Henrico has been home to many crazy parties over the years — and the cretins from Gwar are about to visit.

After nine months in the hospital and a medical discharge from the Marine Corps, Ron Hadad’s return to Pittsburgh wasn’t exactly the homecoming he imagined.

“I came home one day and my parents had moved on me,” he says.

An empty house is just one of the many curveballs that life’s thrown at the owner of Hadad’s Lake in Henrico County.

For generations, the family-owned swimming hole has helped locals stay cool in the summer. This weekend it will serve as the venue for the sixth annual Gwar B-Q, marrying an old-school water park with the best heavy metal band to ever don a cuttlefish codpiece.

But before there was Hadad’s, there was Eaves’ Lake, a place that had seen its heyday in the 1950s. After moving to Virginia, Ron Hadad and his father, Eddie, purchased the defunct swimming spot in 1965. They renamed the lake, and it’s remained a summer fixture ever since.

When they bought the place there were only two buildings, a screened-in pavilion and one large lake with a rope dividing swimmers and boaters. A fan of the nightclub business, Eddie Hadad turned the banquet hall into a club, bringing in acts that included the Glenn Miller Orchestra.

Soon they began converting part of the lake into chlorinated swimming areas with a sandy bottom, building a divider to separate it from the lagoon stocked with fish. Eddie oversaw the club, Ron the swimming side.

Ron Hadad also began managing the Jester Club across from Pleasants Hardware on Broad Street, which he says was the largest private club in Virginia at the time.

“The Jester was a gold mine,” Hadad says. “Everyone that played the Coliseum came and played at my club and jammed on the stage. Chicago, Doobie Brothers, Santana — all those people back in those days. It was three floors of entertainment.”

Managing the Jester was so lucrative that after Hadad and his father “bumped heads,” he decided to retire and move to Las Vegas.

“I was broke in nine days,” Hadad says, laughing. “I had to get a job. There’s been a lot of adventures in my life.” He adds that he built and raced drag cars for five years.

Hadad became the assistant entertainment director at the Aladdin casino, returning to Virginia after his father died in 1990. It was then that Hadad took over the lake, adding most of the amenities — including miniature golf, horseshoes, basketball and volleyball courts — that it has today.

“My dad would love what I’ve done,” Hadad says. “I miss him a lot. I could see him up at the ticket booth collecting money.”

Still hard-charging at 69, Hadad says he’s getting back to working “30 hours a day, eight days a week,” after spending 13 of the past 18 months in the hospital. Hadad has leukemia, which he says is a byproduct of his exposure to chemicals in the drinking water at Camp Geiger, North Carolina, while in the Marines. “I have just 20 more pounds to gain,” he says, “and I’ll be back in the saddle.”

Hadad’s Lake was in the news last week for an attempt to resurrect one of the most popular events held there, Best Friends Day. For 10 years, the celebration of friendship and partying brought thousands to the park. When local hosting platform Indigo RVA announced plans for a Super Happy Mega Best Friends Day scheduled for later this month, it was met with an angry backlash from the original event’s organizers and supporters.

Hadad has fond memories of the original event.

“It was a hell of a mess when it was over, but it was quite an experience,” he says. “You see guys go off the rope swing, and they go, ‘Oh!’ when their balls hit the water.”

This Saturday, Gwar expects to draw 10,000 revelers with its 20 bands, including Clutch, the Descendants, Down, the Dickies and MC Chris. The band’s website guarantees an orgasm for all who attend.

On Friday, the band will host B4BQ at the National with 10 bands including Coal Chamber and Fear Factory. An afterparty with more bands will take place at Hardywood Park Craft Brewery, and on Sunday the band will hold the Brutal Brunch at Gwar Bar.

“We thought we’d share our 30 years of existence with all of our fans and Richmonders,” says Brad Roberts, aka Jizmak Da Gusha, Gwar’s drummer since 1989. “Tell them ‘Don’t miss it, or else Gwar will kill them.’”

For Roberts — who’s known Ron Hadad since he was a kid — the band couldn’t have picked a better venue.

“Hadad’s Lake is a big factor in what makes Gwar B-Q special,” Roberts says. “It’s always been there, and it’s a really cool spot, and I think it gives an element to the Gwar B-Q experience that you couldn’t get anywhere else.” S