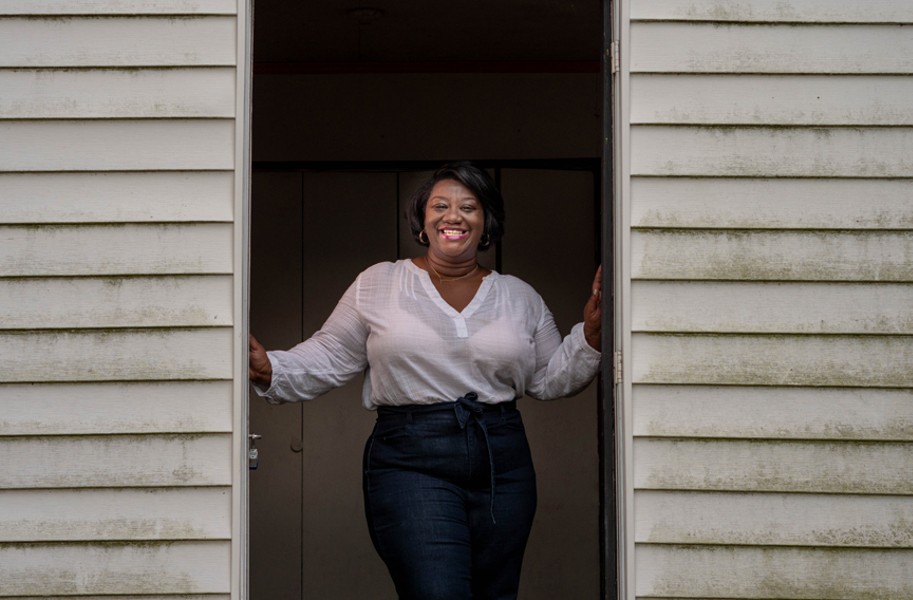 Tressie McMillan Cottom isn't entirely comfortable describing "Thick and Other Essays," as a collection of essays, so I suggest my own back-cover copy: "Thick" sits at the intersection of memoir and manifesto.

"I like that, I think we're going to steal that," she says, over coffee at her neighborhood spot, Brewer's Cafe.

The book employs Cottom's personal narrative to illustrate the impact of racism and sexism while also offering an all-inclusive critique of free-market economics and the class system. A professor of sociology at Virginia Commonwealth University, Cottom extensively footnotes her work, providing supporting data and an absorbing commentary that offers readers a peek into a brilliant mind.

The manifesto aspect is most clear in bookended appeals to support black women, something shared with her previous book, "Lower Ed," which chronicled the rise of exploitative for-profit colleges. Although she may sound radical, Cottom's politics are populist.
"I vote the interest of poor black women," she says. When people vote with that interest in mind, she adds, "almost nobody loses. Nobody loses here except an elite financial class, which I thought was the goal."

The opening essay, the titular Thick, serves as an introduction to Cottom and thick ethnography, the sociological and anthropological practice of trying to understand people and communities. "It's this idea: 'How can you get to know someone else's worldview?' If we do that, respectfully anyway, one of the ways that it can be done is by writing a deeply layered interpretation of how people move about the world," she explains.

Even her critics get this compassion. The second essay, In the Name of Beauty, explores the criticism she received from black women after she wrote about singer Miley Cyrus and her adoption of black affect to mark the transition from teen idol to edgy pop star. The essay explores that anger and clearly illustrates how beauty standards are shaped in white culture and then used against black and brown women.

Two years after the 2016 election, Cottom also has some remixed insights on presidents Barack Obama and Donald Trump in an updated essay titled, Know Your Whites. Cottom, who attended house parties in gated communities for Obama and Trump rallies alike, describes their elections as two sides of the same coin of white identity politics. Although shocking, Cottom makes the revelation feel obvious under the weight of her argument. She tells me it was after the Trump rallies that she fully realized the two candidates were doing the same thing for their voters, but adds, "That probably says more about us than it does them as candidates, which is I think exactly why people don't think about it."

Dying to Be Competent, the most personal and powerful essay, almost didn't make it in the book. This piece explores the high mortality and miscarriage rates for pregnant black women, through statistics and Cottom's own traumatic story of miscarriage. She doesn't think she'll write about it again, but her editor's response to an early draft compelled her to share it in this book. "What she did convince me of was there was a subset of readers for who it could be potentially transformative, and I'm a sucker for that. That's why I do the job I do."

Although early reviews describe the collection as controversial, Cottom isn't sure which essays will set readers off. Her lawyers were most worried about Black Girlhood, Interrupted, about sexual abuse and rape, which covers media personalities R. Kelly and Charlamagne tha God. "Oh boy. Having to explain to some law firm in New York, like, who Charlamagne is, that was a joy," she says. Angry calls to her office followed the first publication of the essay in the New York Times, from black men who felt it was unfair.

In the final essay, Girl 6, Cottom explains how frustration with a particularly banal David Brooks piece in The New York Times, "about how gourmet sandwiches are ruining America," compelled her to challenge the newspaper on its lack of black women writers.

I don't know if she'd turn down the job, but she's quick to say the newspaper isn't going to hire her. "To be fair to them, it sets a terrible precedent, because then you become, in rap terms, you become the guy that everybody's got to make the diss record about, because it's the quickest way to get put on.

When the Times is ready to hire that woman, Cottom says there's no shortage of qualified writers, rattling off names —and Twitter handles — rapidly.

"There are some young black women who are deeply trained lay historians and critical leftist people who can write their asses off. Really, as much as race and class and gender are a thing at The New York Times, in many ways, class might be their real holy grail."

If anyone at the Times wants that list of candidates, or if readers want to keep up with her latest insights, Cottom says she's easy to reach: you can catch her on Twitter.

Tressie McMillan Cottom will have a signing of her book on Sunday, Feb. 10, at the main branch of the Richmond Public Library at 2 p.m.