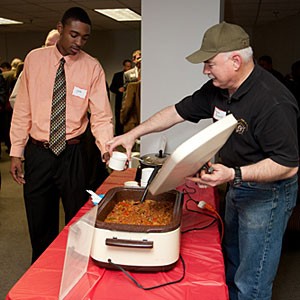 No, Clark Mercer didn't kill the kangaroo. He bought it at a specialty meats purveyor in Northern Virginia. And Dave Hewes will quietly acknowledge that this bison was last grazing in a cooler at Kroger.

But that elk simmering in No. 11's crock pot? Well, let's just say it was in the wrong place at the wrong time when it met up with Harold Ellis out West. See? There's a picture right there of the massive, hanging carcass.

It's in my little paper cup now, where it brims with flavor. I'm among a handful of judges at the 20th Annual General Assembly Chili Cook-Off, organized last week by Will Payne, executive director of the Virginia Sportsmen's Foundation — a nonprofit that offers hunting opportunities for disabled veterans.

Payne got hooked on the event as an aide to former state Sen. Ken Stolle, who founded the nonpartisan cooking competition as a break during the General Assembly session. Stolle's now sheriff of Virginia Beach, and there are plenty of law enforcement brethren surrounding the slow cookers tonight. Payne estimates about 215 people in attendance, including state senators and delegates, lobbyists, state cabinet members and agency heads — and Nutzy the Flying Squirrel.

There's no squirrel recipe in contention tonight, but there is some “Battle of Goose Creek” chili that bears a “freshness guarantee: These birds were flying three days ago!” John Jones, executive director of the Virginia Sheriffs' Association, came by his caribou honestly. And Kevin Carroll, a Chesterfield County police sergeant, can tell the tale of the wild boar you're chomping into.

As for Ellis, owner of the consulting company Public-Private Infrastructure Inc., the mighty elk brought glory to him and his cooking partner, Ron Tillett, a former secretary of finance under Gov. Jim Gilmore who left to join investment banking house Morgan Keenan. They get their second consecutive first place.

Mercer, with his kangaroo, nabs second place. Hewes' wife, Gail, gets third with her bison. And using a triumvirate of caribou, bison and cow, the spiciest chili award goes to Wayne “Bubba” Ozmore, commissioner of the Virginia Department of Alcoholic Beverage Control.

The vegetarian chili did not bring home a prize.