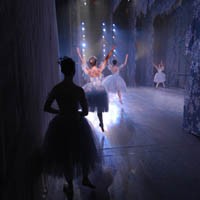 While the strains of Tchaikovsky's overture begin to play at the first Saturday night performance of Richmond Ballet's “The Nutcracker” on Dec. 12, I can't help but get possessive. This still feels like my ballet.

The annual production has changed a lot since I last danced in it. A new production in 2003 brought bigger sets, richer costumes, and new characters swapped for old ones. But tonight, Tchaikovsky's rousing music sounds like a herald for the return of “The Nutcracker” to the Carpenter after a stint at the Landmark, and I'm reliving vivid memories of the many parts I danced on this stage, from ages 9 to 16.

Back then, my entire year revolved around the auditions in September. There was a complex hierarchy of roles to navigate. Little girls playing guests in the first act's Christmas party spent a whopping 15 minutes onstage and got to wear velvet dresses and curls in their hair — they were the cool clique.

To be one of Mother Ginger's harlequin boys, you had to be able to do a cartwheel. (I couldn't, but I preferred a skirt anyway.) To play a soldier was just OK; to play a page meant you barely danced at all. Getting the part of marzipan shepherdess, which at the time was the only girl's part performed en pointe in the special shoes that allow ballerinas to dance on their toes, felt like going pro. That part has since been replaced with adorable, review-proof little girls dressed as lambs.

The best part: Clara, the girl whose dream about her nutcracker is the basis for the whole ballet. Tonight's Clara does less dancing than the one for which I was called back in the seventh grade. I didn't get it, and I was devastated. Instead of performing a once-coveted battle scene solo, Clara now cruises on an oversized tufted pouf that glides across the stage.

The worst part: Not being cast at all.

After the cast list went up, a whirlwind hazing of weekend rehearsals and run-throughs ensued, all leading up to a heady two-week residency backstage at the Carpenter.

Of course, that was the old backstage, and some of the parts I played no longer exist. A former ballet teacher who still coaches young dancers in “Nutcracker” choreography takes me backstage to see old friends during intermission, and I recognize none of the vast new underground complex of spacious hallways and brightly lighted dressing rooms beneath the spot where the old Thalhimers building stood. It's a world away from the makeshift holding pens and cramped corridors we used to sneak around in.

Those small spaces molded close friendships. They also compounded the stresses of performing. I wouldn't call what I instigated under Mother Ginger's skirt one year as a fistfight, as a Style Weekly profile of my friend and longtime “Nutcracker” volunteer Jenny Jones later characterized it — it was more of a firm shove. But everyone has a place under that skirt, and Jordan was in mine. I panicked and initiated a catfight that, although the details of it are now fuzzy, may have caused a frenzied blob to billow out from under Mother Ginger's giant pink dress.

The ballet gods must have forgiven that incident, because years later I got to play Mother Ginger herself. I was offered the part after a chronic knee injury prevented me from dancing in the Waltz of the Flowers, a senior role for advanced pupils before they became trainees with the professional company.

I knew my stint as Mother Ginger, hamming it up on the shoulders of one brave male dancer in a powder-white wig, sequined false eyelashes and a jeweled choker, was my last role. I savored every minute of it.

Watching the second act tonight, I mourn the old Mother Ginger. Why does the new costume have rabbit ears?

But this “Nutcracker” isn't mine — it belongs to the little girl sitting in front of me, who wears a flouncy pink tutu over her T-shirt, leggings and purple glitter Crocs. She's been dancing in and out of her seat all night, and after Igor Antonov, who plays the Sugar Plum Fairy's cavalier, finishes his solo, she just can't contain herself: “That was great!” she says.