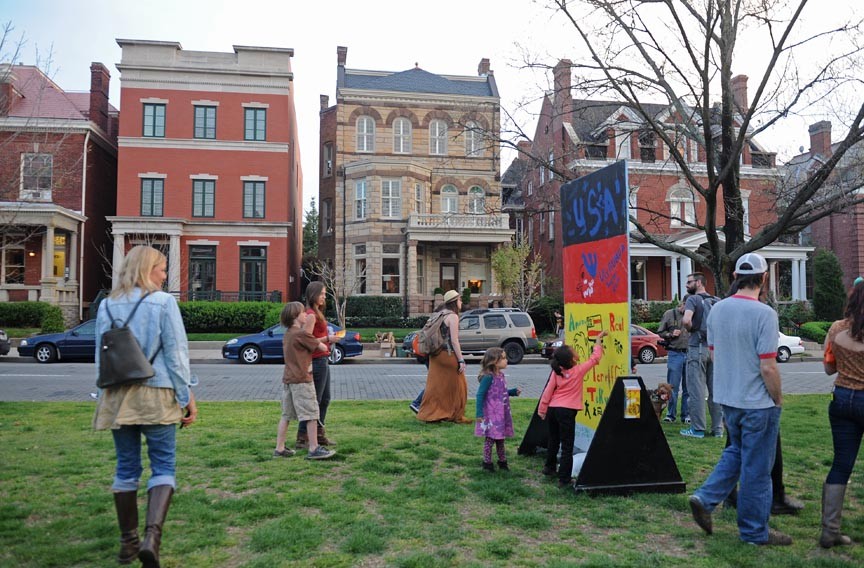 If there's one thing that all sides involved in last week's flap over an art exhibit on Monument Avenue agree on, it's this: It should have been simple.

But opinions vary on how and why city officials decided to issue and then revoke the permit for Art 180's increasingly well-known public art installation.

The "What Do You Stand For?" traveling exhibit — 31 portraits painted by local artists, many of them grade-schoolers — set up in the median of Monument on March 26.

Marlene Paul, co-founder and executive director of Art 180, says that she received a call March 29 from a right-of-way engineer in the city's Department of Public Works, informing her that the displays had to be removed.

Did city officials kowtow to disgruntled, influential residents of Richmond's most famous thoroughfare? Or did the Department of Public Works simply screw up?

To connect the dots, a quick recap: Last year, amid the city's plans to designate a new downtown arts district, city officials began looking for ways to incorporate more public displays of art, City Hall sources say. Officials with Art 180, a nonprofit whose mission is to provide children opportunities for artistic expression, was at the time meeting with city officials about locating its "What Do You Stand For?" exhibit on Monument Avenue.

Art 180 had been looking at several locations. Among the places considered was the flood wall in Shockoe Bottom and in Maymont Park. Eventually, city officials gave the group the go-ahead to install the display along Monument Avenue between North Mulberry Street and North Allen Avenue.

But sources close to the process now acknowledge it was a "stretch" to issue a work-in-streets permit for the display of art in the public way. Those permits usually are issued for construction projects, special events or anyone whose needs require the temporary obstruction of a public street.

Issuing this type of permit apparently is routine. "It's not something that is normally kicked upstairs," one city source says. "What made this different, however, is that you're talking about art. Art triggers free speech considerations. And … the supervisors realized there was a problem."

The city's internal review of the decision began as early as last Tuesday, according to sources. It's unclear whether the review was prompted by a phone call or series of phone calls from residents who were unhappy with the installation of the 8-foot-tall murals in the middle of the tony avenue.

By midweek, Art 180's Paul says her organization had received a phone call from a resident who was unhappy about the murals on Monument. Monument's neighborhood assocition also fielded concerns about the murals.

Would it infringe upon the Monument 10-kilometer run or Easter on Parade? Paul says Art 180 received the blessings of both event organizers. "The city seems to have been trying to find a justification to remove the paintings," Paul says.

"As far as I know, we haven't seen any complaints or requests from homeowners to take the artwork down," says Byron Marshall, the city's chief administrative officer. He adds that his own review, which began on March 31, was prompted by emails from supporters of the exhibition. Marshall says the vast majority of emails he received asked that the artwork remain.

Despite the pleas, Tammy Hawley, press secretary for Mayor Dwight Jones, issued a statement from Marshall April 2 ordering the exhibition's removal. Marshall wrote that the permit for the display was issued — according to the city attorney's office — in violation of city code section 38-113, which details unlawful signs in city medians. According to Marshall, there is no "correct" permit that would authorize a display of art on Monument Avenue or any other public street.

For Jones, it's another muffed opportunity. Despite attempts to shed its conservative image, Richmond can't seem to shake the perception that the city is unwelcoming to creative people. And there's ample evidence it isn't.

In the paradox that is Jones' first term as mayor, city administrators often have tried to embrace the arts community only to fumble in the execution.

Last year, tobacco giant Altria Group helped sponsor murals along Broad Street that ran afoul of the city's Commission of Architectural Review. Despite the city's approval of the project, the commission threatened to have the murals removed.

Sources inside City Hall say that while the city labors to revive attempts to create a downtown arts district and brand Shockoe Bottom as a haven for creative people, Jones still hasn't given up on making Richmond more art friendly. Policies relating to public art will be put up for review by residents and the City Council, Marshall says. As for the short term, he says: "We're just going to have to pay more attention." S

Corrections: In earlier print and online versions of this story, we incorrectly reported that Art 180 met with city officials to discuss several potential locations for the murals. Art 180 met with the city about placing the murals on Monument Avenue. Also, Marlene Paul, Art 180's executive director, didn't personally receive multiple complaints from residents on Monument; she received one complaint. We regret the errors.