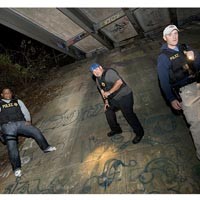 If Richmond police are certain of one thing, it's that Kendrick Johnson is a dedicated Soulja. As reward for his dedication in hanging out with his friends who also are known to police as members of the Baywood Soulja's gang, a parole violation, Johnson will spend two years in prison.

It's a reward — hard time for nonviolent offenses — Richmond officers have been pursuing far more frequently for known gang members.

“The more gang members we bring into court, and bring their gang affiliation in during sentencing, the more the courts take notice,” says Robert Sprinkle, a detective with Richmond gang unit. He says revoking probation on past convictions makes it easier to safely remove criminals from the streets.

Sprinkle offers no statistics, but says dozens of gang members have gone away on simple parole violations in recent months.

Richmond police and partners in the Commonwealth's Attorneys Office and the state's probation and parole office are coordinating efforts to lock up bad guys before they can do anything worse. They say it's a highly successful and timely approach, because detectives have noted an apparent upswing in gang activity citywide.

“I don't want to say it's an uptick, but we've seen more people who are versed in gangs and activity and they're throwing up graffiti,” says Sgt. Tim Wyatt, Sprinkle's supervisor. “It doesn't necessarily mean there's more gangs in the area — the gangs have always been here.”

Which brings us back to Johnson.

He's one of the original five members of the Baywood Souljas, Sprinkle says, first identified by police a number of years ago when one proud member showed up at high school wearing an airbrushed shirt bearing the gang's name and portraits of the five charter members.

Johnson “was on probation for, I believe it was a drug charge,” says Sprinkle, who recounts that he picked Johnson up after tips on a shooting led the officer to an apartment where he was hanging out a fellow gang member.

“Part of [Johnson's] probation is he signed gang conditions. … he couldn't be with gang members or in known gang areas,” Sprinkle says. “When they get together, bad things happen.”