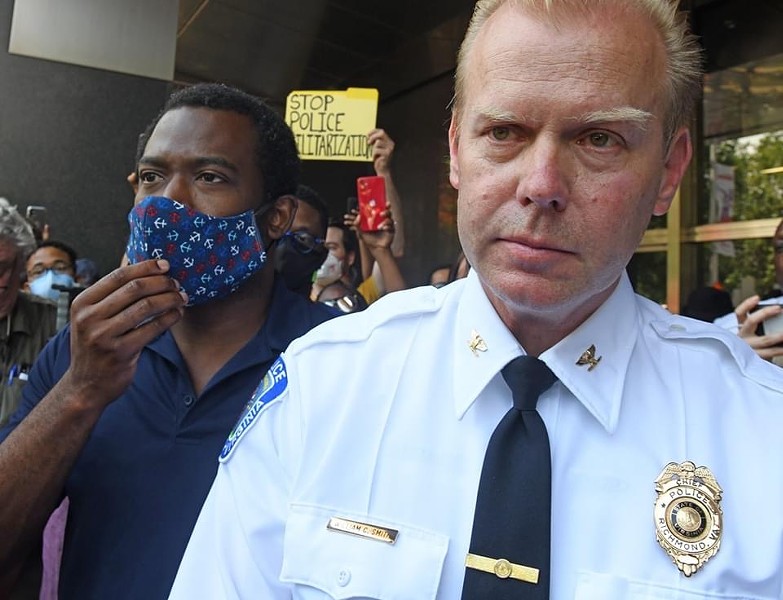 Richmond Police Chief William Smith resigned at the request of Mayor Levar Stoney in the aftermath of 16 days of protests in the city following the death of George Floyd at the hands of Minneapolis police.

“I have requested Chief Smith’s resignation,” Stoney said at a Tuesday news conference. “He is a good man. He has put his heart and soul into the service.”

William “Jody” Blackwell, a Richmond police and Marine veteran, will serve as interim chief. Stoney said a national search is underway for a permanent replacement. Stoney has faced growing criticism that he can’t control demonstrations as Richmond and its trove of Confederate memorials have become the focus of national outcries.

Protesters have toppled statues of Confederate President Jefferson Davis and Gen. Williams Carter Wickham. A giant statue of Robert E. Lee, slated for removal by Gov. Ralph Northam, has been defaced, A statue of Christopher Columbus was torn down, and one commemorating Richmond police who died in the line of duty was removed.

Over the more than two weeks of almost nightly turmoil, tensions have grown between City Hall and the Police Department.

Officers used chemical repellents against peaceful protesters at the Lee statue and one was accused of spitting on a protester. Police have used tear gas, pepper spray and rubber bullets to suppress crowds.

The most recent issue involved a police officer who allegedly drove a vehicle through a crowd. Smith said the officer had been assaulted by a protester, who was arrested.

Stoney said Tuesday that he wants to re-imagine a new police approach that encourages “evidence-based and community-based” law enforcement. He backs a civilian review board and says there are more reforms to come.

Smith is one of a series of police chiefs to be replaced in a short period. The police chief of the Atlanta department resigned after an officer shot and killed an African American man who was accused of driving under the influence of alcohol and, in a tussle, stole an officer’s stun gun.