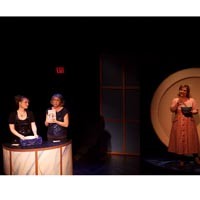 You know the drill. Someone shouts out, “Let's put on a show,” and all the other kids yell, “Yeah!”

That's pretty much how it went with “Full Plate Collection,” the brainchild of Erin Thomas-Foley, Irene Ziegler and Jenny Jones Hundley, three established theater veterans who wanted to develop a play while gathering both professionals and students to celebrate “Minds Wide Open: Virginia Celebrates Women in the Arts.”

The idea person is Thomas-Foley, a seasoned actress and programs director at SPARC. She called on her friends writer/actress Ziegler and actress/teacher Hundley to join in the fun. Over many evenings and pitchers of beer at O'Toole's, they discussed logistics and themes.

“We brainstormed until we came up with something that had the potential to be able to include the young women that we found to come aboard this project,” says Ziegler, who's crafting the script. “The play answers the question, ‘What would happen if Betty Crocker, Aunt Jemima, Betty Boop, Barbie and Rosie the Riveter sat down for a game of poker?'”

Collaborative theater projects are common, but usually one type of approach is used for developing a piece. “There are so many different methods for theater,” Thomas-Foley says. “You've got people who workshop and come up with things out of nothing. Then you've got people who want written word and are locked into written word. Both are valuable. So what's going to happen when I bring this wonderful creative workshop person [Hundley] and this talented hardcore writer [Ziegler] together? How do they merge their methods to produce a show?”

The result of this unusual marriage of methods is a new American play, “Full Plate Collection.”

The more experienced members of the project are enthusiastic about mentoring fresh new talent. “It's really exciting to get to work with the next generation of people who will eventually take the reins,” Wormald says.

The “Production Team,” a mix of high school and college students with varied interests, is working on every aspect of the production. “Having younger women in the arts learn from older women in the arts in partnership — it's just wonderful,” Hundley says.

Because of copyright protection issues, these characterizations of “important and influential women who never existed” must be suggested rather than named in the show. The identity of each character is obvious but the names have been changed to avoid legal infringements. For example, Betty Boop is now Boopsie Bleep, while Aunt Jemima is referred to as Auntie J.J. The real question is, are these borrowed fictional icons of yesteryear relevant to today's audiences? “Yes, they are,” Ziegler says, “but only after we give them space to evolve.” S

“Full Plate Collection” runs through March 27 at the Little Theatre inside the Historic Empire Theatre, in collaboration with Barksdale/Theatre IV. More information at fullplatecollection.blogspot.com or barksdalerichmond.org/fullplate.html. Ticket: $10-20 and are available by calling 282-2620.