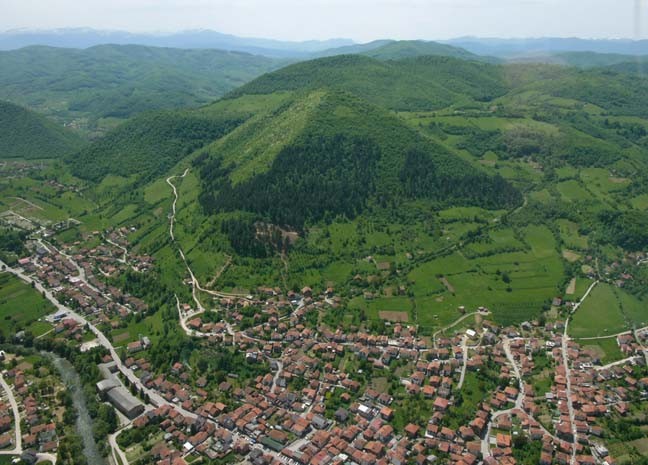 With one hand on the steering wheel and another working his phone as he takes relentless calls, Semir Sam Osmanagich veers his Jeep Cherokee up a rough road in the mountains some 15 miles northwest of Sarajevo. One morning this past August I spent a morning with the man whom the international media have nicknamed Bosnia's Indiana Jones.

The 50-year-old Bosnian businessman claims that he has discovered the largest and most ancient — 12,000 years old — pyramids in the world. Understandably, it's a claim that's stirred considerable controversy in international archeological circles. Next week he'll lecture here and Richmonders can decide for themselves.

Sitting shotgun and surveying the countryside, we ascend a hillside flanking what he calls the Valley of the Pyramids. The landscape reminds me of western Virginia in summer where emerald farmlands give way to sculpted mountains. But these hills outside Sarajevo are deceptively tranquil. Like Virginia's countryside almost 150 years ago, these fields and woods were once wracked by civil war and unimaginable violence. Unlike in the American South, however, the war in Bosnia and Herzegovina was recent (1992-'95) and many cities and towns still show wounds. Public parks are grave-filled and once-gleaming business complexes are rubble heaps. When friends and family gather in the ubiquitous coffee houses, they talk politics. There's an uneasy impasse between the Serbs, Muslims and Croats. The tension is real and expressed.

Osmanagich, who holds a doctorate in sociology and operates a metal-crafting business in Texas, approaches national healing with a unique scheme. To divert minds from the recent past— and establish some semblance of patriotic unity—he is taking his fellow countrymen back to the future: Way back.

Our first stop this morning is at the Pyramid of the Moon which faces — across a valley — what he has named the Pyramid of the Sun. We exit his vehicle and join others with whom I'm traveling from Bridging Boundaries International, a Richmond-based exchange program. Together we trek uphill to where a dozen or so volunteers dig, sift and examine the remains of what appears to be a spiraling, slightly sloping roadway about 10 feet wide. "Perhaps it was for collecting water," says Osmanagich.

"When I started coming here five years ago with my parents and friends I saw that these hills were regularly shaped," he says, "Geologically, this cannot be a coincidence." "It's a very exciting project and we have attracted many experts, students, tourists and distinguished visitors to work on the project—this year from Holland, the United Kingdom and Germany."

Continuing along the path some visitors recognize Osmanagich (he's been the subject of considerable news coverage in the United States) and ask to be photographed with him. Others just stare. He is a local folk hero to many. "Thank you for coming," he unfailingly responds to visitors.

"This has been a challenge, the local establishment was against the project when we started and people were laughing at me," he says, "They labeled me a big hoax. They said we just want to make money."

Vuk Bacanovic, a Sarajevo journalist, told Smithsonian magazine that Osmanagich's ideas are "Like a religion based on corrupted New Age ideology."

Osmanagich counters, "We've kept our communications open so that people can come and see what we are doing," adding, "The Egyptian, Chinese, Russian and Polish archeological communities, however, have been supportive."

Back in his jeep we drive off toward the Pyramid of the Sun. The phone rings again. He explains that we will be joined in about 10 minutes by the prime minister of Malaysia.

No sooner does Osmanagich park than a rumble is heard as a motorcade of eight black SUVs and Mercedes sedans approaches. First the advance team, then a film crew emerge. Finally a diminutive, white haired man in a pastel leisure suit steps out of his car with his decidedly chic wife.

After a few introductions our respective parties don hard hats and together make our way into a dank tunnel with overhead clearance of no more than 4 feet in places. Deep within the pyramid, Osmanagich begins his monotonic spiel for yet another audience. "For something to be called a pyramid it must first, have a regular geometry. Two, it must be oriented to the cardinal points. Third, it must be constructed by man. Fourth it must have an inner passageway and fifth, underground tunnels."

Back outside and in blinding sunlight, as the Malaysians return to their vehicles, Osmanagich pulls the prime minister aside for a private last word: "This is about nation-building, tourism, economics." The prime minister nods approvingly.

"It's been an interesting ride," Osmanagich tells me later, "So many challenges, but one thing is sure, we will have to change of paradigm on how we treat Bosnian history. Egyptology is over 200 years old. We're just starting." S

Semir Sam Osmanagich will give an illustrated lecture, "Are the Bosnia Pyramids the Discovery of Our Generation?" at the Maggie Walker Governor's School, 1000 N. Lombardy St., on March 29 at 7 p.m. Free. Call 337-2345 for information.