"The Raven" makes you want to see John Cusack nevermore. 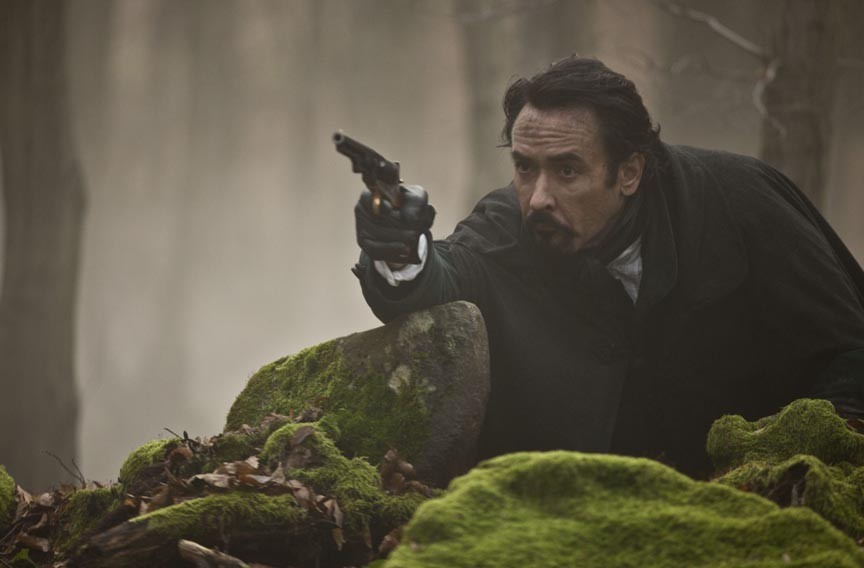 Once upon a midday dreary, this film I pondered, weak and weary,
a curious, quaint and soon to be forgotten chore. ...
"'Tis another slasher flick," I muttered, "nothing more."

What happened to poor Edgar Allan Poe? Why did he turn up dead after ranting like a lunatic through the streets of Baltimore? There are many theories, but as pointed out during the introduction to "The Raven," a movie in which Poe tracks a 19th-century serial killer, Poe's "last days remain a mystery."

That's the end of the film's interesting parts, and about the only thing, I think, it gets right. My theory: Poe invented a time machine, traveled to our day and was driven mad seeing himself on the screen embodied by John Cusack.

I can think of a few worse casting choices for Poe, or for anyone from another era, than Cusack. Matthew Broderick, maybe. Or Will Ferrell in a wig. But it's difficult to think of one as perfectly miscast to play a gaunt, mid-19th-century writer of macabre thrillers than the tall, fleshy and fast-talking Cusack. Here is a man born for roles requiring his dress shirt be untucked and unbuttoned, awkwardly stuffed into starched collars, waistcoats and a literary mind. It's too bad the theater I was in was practically empty. Surely there would have been giggles, if not outright laughter, hearing 19th-century American English spoken by, like, uh, Lloyd Dobler, man.

The best line takes place in a bar, where a penniless, overacting Edgar Allan corrects another inebriate: "No, I'm not po', I'm Poe!"

Cusack's Poe is a slacker-wiseacre version, like the po' man's Robert Downey Jr., in a cross between "Se7en," "Sherlock Holmes" and "Say Anything" (basically Cusack's "From Hell"). He's barely finished verbally fencing with the father (Brendan Gleeson) of his beloved, Emily (Alice Eve, a buxom blonde who looks like she chose this role over the love interest in the latest "American Pie" movie), when a police inspector (Luke Evans) interrogates him about a string of recent murders, all of which exactly mimic the stories from his books. Then the murderer, a man in black who always gets away at the last second on the back of a horse, abducts Poe's beloved and commands him to write about his further crimes in the newspaper — or the girl gets it! You'll have to imagine the mustache being twisted. The killer's identity also is held for ransom (of your time).

The mysterious murderer is kind of like Jack the Ripper crossed with the Zodiac Killer. His motives are at best murky, but so are the film's. It puts great emphasis on literature that must be obscure to anyone interested in a thoroughly mundane, by-the-numbers, serial-killer movie. The plot relies primarily on the tired trope of the unbelievable coincidence crossed with the cunning mastermind, able to pull off feats the CIA couldn't invent. Good luck figuring out the reasoning behind any of it. "The Raven" is a puzzle missing way too many pieces.

You wonder if the members of the demographic disposed to this kind of thing, those that presumably haven't seen it done a hundred times before, and a hundred times better, will care about Poe, or even know about him. Certainly they won't get the reference to Emerson, or other inside jokes about Poe's life the film sneaks in (movies should entertain audiences, not their makers). Such things aren't only incongruous but also wasted in a movie with this many chase sequences.

"The Raven" is a mess, but that's certainly not surprising given its apparent intentions. Yes, it could have been a serious movie about Edgar Allan Poe's life, which was rife with juicy movie material: women, drinking, debatable incest with teenagers, and a heaping imagination of Gothic horror that ties right into current cultural tastes. But alas, "The Raven" is just another one-weekend box-office grab, with a nasty attitude toward critics. You even get it from the pendulum. Explaining who the victim was to the police, his editor says, "He was a free-lancer, mostly criticism — you know, the easy stuff."

This from a movie with the crucial opening lines:

Doorman: "He's on the fourth floor!"

Police chief to his men: "Upstairs!"

Honestly, there really isn't much of movie here to critique. "The Raven" is little more than a compendium of slasher-movie clichés and Poe titles. Quoth the raven: What a bore. (PG-13) 86 min. S