Richmond toy maker Phil Barbato packs his van with fluff and heads to the Big Apple. 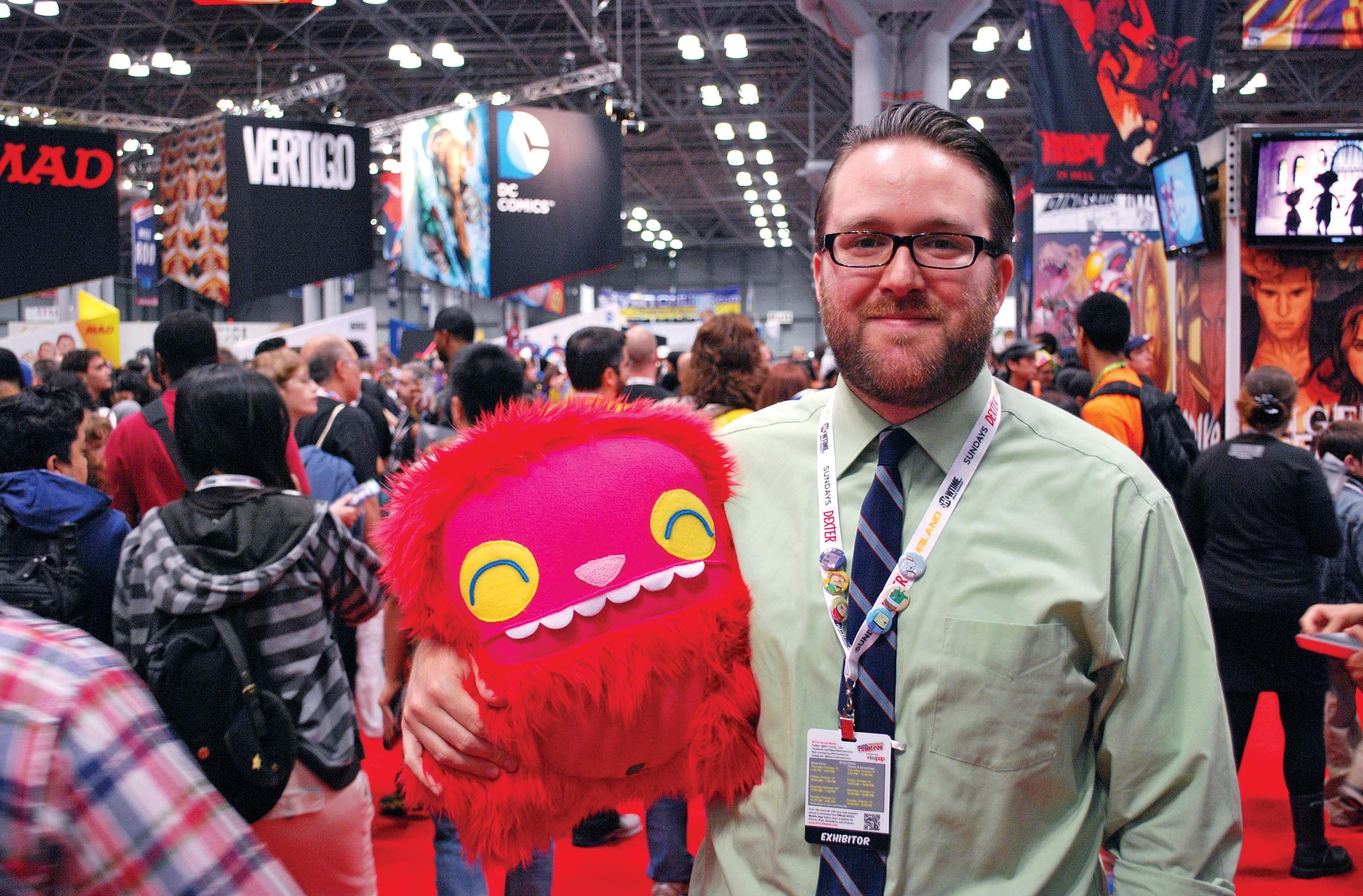 Richmonders love toy-maker Phil Barbato's stuffed apes, baby octopuses and Viking yaks. But could he win over Spider-Man and the Incredible Hulk?

Barbato vowed to find out. The local crafter represented Richmond from Oct. 11 to 14 at one of the biggest fan conventions in the country: New York Comic Con. It's the largest pop-culture event on the East Coast, including comic books, animation, video games, toys, movies and a lot more. On average, 100,000 people attend every year, many showing up in overly elaborate costumes and geeking out over the things they love. Simply put, it's where the nerds come to let their nerd flags fly.

Barbato and his wife, Meghan, have been hand-making plush toys, paintings, buttons and other cute things to hug and lo for years. They normally sell their work at the market during First Fridays Art Walk and craft shows such as the Spring Bada-Bing, but they always thought that new fans waited at comic and sci-fi conventions.

"Cons are different," Barbato says. "At craft shows, we always have to explain what our plush toys are and you get the confused people who just don't get it. At cons, there's no need to explain because the people there love anything weird looking."

"Our whole client base is nerds," Meghan adds. "There's such a high concentration of people at these cons who love our type of craft."

Instead of testing the waters with smaller, closer conventions, Barbato decided to jump headfirst into one the biggest. "We decided to just throw ourselves out there and see what it's like," he says, laughing.

Barbato spoke on a panel on toy-making at Comic Con last year. He learned that vendor spots at the convention fill up quickly, unlike the craft shows he's used to. So he kept checking in with the program director — "We harassed her nonstop," he acknowledges — and the effort paid off when Barbato got a spot on what's known as "The Block." That's the convention's edgy, artistic section featuring fashion, collectible toys, artwork and illustrations and independent magazines.

By the time Barbato reaches the convention center, there's a flurry of excitement while vendors get ready. He assembles his metal shelves and one handmade wooden shelf that fits together like a jigsaw puzzle. But Barbato learns that what's impressive at local shows is nothing compared with the big leagues. Some booths look like occupants built an entire store in their space. It's intimidating.

"Every craft show we do, people are always saying 'Wow, your setup looks amazing,'" he says. "Here, we're a little embarrassed by how simple it looks next to all these other booths."

Once the doors open, Barbato knows that the moment of truth finally is here. People come in droves. Many are in costumes. There's an 8-foot-tall Transformer, at least six different Deadpools, a man dressed up as Batgirl (yes, you read that right), Japanese anime characters, plenty of Avengers and a fully functional "Star Wars" droid (not R2-D2, unfortunately). No fewer than 12 "Oppa Gangnam Style" flash mobs are organized during the course of the weekend, including one choreographed with the Teenage Mutant Ninja Turtles. Many are right by Barbato's booth.

Barbato spends most of the convention trying to sell his plush toys while stuffing and sewing new ones to fill up the shelves. He meets fellow plush makers who offer sage advice and talks with the people who stop by his booth. He makes a number of sales — and deals with the inevitable critics, I discover while lending a hand to Barbato, who game me a convention pass.

"Oh my God, they're so cute!" (Insert high-pitched squealing here.) This is the single most-used phrase heard every time someone enters Barbato's booth. Everyone says this. Even the really tough-looking dudes.

People ask if the toys are hats and attempt to wear them on their heads. When Barbato tells them they are in fact not hats, they inform him that he should make hats.

"I'm a grown-ass man and my house is full of them," Barbato responds.

Some aspects of the convention prove challenging. Barbato sold way more than he's ever sold before at a craft show, but less than he expected to sell at Comic Con. Pricing — $22 for a tiny octopus to as much as $85 — may have been a factor. And unlike in previous years, "The Block" occupies its own separate room down the hall from the main show floor, which cuts into foot traffic. Many people simply have trouble finding them.

Nevertheless, Barbato plans on doing more comic conventions. He's looking into Otakon in Baltimore and Dragon Con in Atlanta as well as smaller ones closer to home. That's where his fans seem to be, he says, and there lie his hopes of hitting it big: "You don't experience anything like this at a craft show." S