Drains, pumps and disbelief: The realities of engineering in the wake of Gaston. 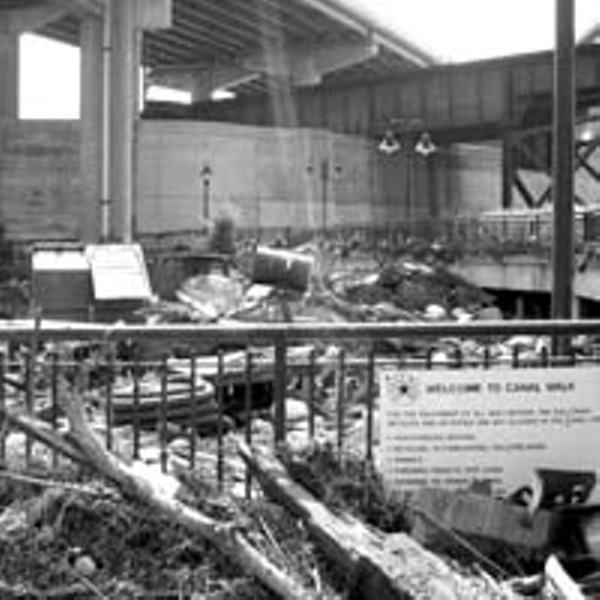 Underground, the players are big and familiar. Shockoe Sewer, also known as "the arch," is 27 feet in height and runs all the way to the top of the valley. There's the Shockoe Box, another main drainage system that is shorter, from the flood wall to Main Street Station. And there's the East Gravity Outlet, the main grated drain that sits at ground level, in front of the Canal Walk sidewalk and a few hundred feet from the flood wall.

Above ground, it's a concrete jungle.

In the parking lot across the street, the Dock Street Pump Station sits like a huge windowless gray post, obscuring the giant machines that when powered kick 75,000 gallons of water and sewage out through a 60-inch pipe every minute. Sometime during the night of Aug. 30, probably around 8, Virginia Power shut off power in the area to reduce risk of electrical shock to those trapped in the storm. But it knocked out the giant pumps, too. There is no backup generator.

It's a massive drainage system that is capable of handling an impossible amount of water, insists Hay, who bewilders himself when talking about the destructive power of Gaston. This storm dumped more rain on the Bottom than anyone could have imagined. Hay says it's probably the biggest rainwater flood in Richmond's history. He likens its unthinkable and unexpected nature to Sept. 11, 2001, when the Twin Towers were knocked out of the sky by terrorist planes.

Who could plan for such a thing?

"It wasn't a small plane, it was a jumbo jet of a flood," he says, his eyes widening. "You cannot be prepared for something of this magnitude."

Indeed, as the multimillion-dollar cleanup of the Bottom continues, and many businesses face the reality of closing shop for good, the finger pointing continues. All manner of possible conspiracies emerge: The gates were closed, trapping the water inside; someone forgot to turn on the giant pumps; the flood wall trapped the water north of the James River, actually causing the Bottom to flood.

"A lot of people assume the flood wall was closed," says Hay, referring to the gates. "Oh no, they were open."

All the above-ground gates were open, says Hay, as they always are unless there's river flooding. Below ground, where gates are more often closed to keep sewage from seeping into the river, gates were open by about 5 p.m.

The underground gate for the arch was open before the storm started and at 4:30. The Shockoe Box gates were opened as well, allowing the storm water and sewage to drain into the river. (Most unsanitary sewage was drained into a giant 44 million-gallon retention basin during what Hay calls the "first flush.")

S. Pierce Brinkley, operations manager for the Richmond Riverfront Corp., insists that the flood wall prevented a lot more deaths and injuries. Because it bottled up the water, more personal property — and possibly people — avoided being washed violently into the James River.

Years ago, when the first flood-wall engineers were designing the $135 million flood wall, the engineers told city officials that the flood wall could create problems during a major rain storm, recalls Don Charles, former city engineer and architect, and now chief executive of the Historic Richmond Foundation.

"I remember very distinctly," Charles says of the engineers' warnings about "back-of-the-wall flooding."

Charles L. Dunn, who oversaw construction of the flood wall as flood-wall coordinator for the city of Richmond from 1986 to 1995, says it wasn't built to handle more than a foot of rain in eight hours.

"It's the worst possible scenario," Dunn says, adding that the flood wall was built to handle just more than a 100-year storm. What Richmond got was a 500-year storm.

The freak nature of Gaston doesn't mean there should be wholesale changes, either, Dunn suggests.

Take one of the commonest suggestions — put a backup generator on top of the Dock Street Pump Station, for example. But not only would a generator capable of moving those giants pumps be massively expensive, it's difficult to know if such a generator would have made any difference during Gaston.

It certainly would have helped pump the water out of the Bottom once the rain stopped. But during the storm, Brinkley says, it wouldn't have made much difference. The water was coming down the stream too fast.

Perhaps opening the existing pedestrian walkway through the floodwall, underneath the banners at the end of the Canal Walk, would have helped with draining the water. Other than that, there's not much else that could have been done, Brinkley says. Hay and Dunn concur.

If there is a lesson from the storm, Hay says, it's that the city needs an evacuation plan for the Bottom. The city has no such plan, he says, and as a result many people were caught off guard, and a few killed.

"Nobody seems concerned about an evacuation plan," Hay says. S