Pleasing to the Eye

A look at two new mixed-use building projects in Manchester that deserve to be called fine art.

Scott Elmquist The Current, a mixed-use complex, designed by Hickok Cole Architects of Washington, in the 400 block of Hull Street combines office spaces, 215 apartments and a food hall.

Roman architect and writer Vitruvius decreed in his first century B.C. treatise, “De Architectura,” that buildings must possess the three attributes of strength, utility and beauty. He really started something. Sure, none would argue that buildings must be permanent and be useful, but beautiful? Requiring that architecture be aesthetically pleasing places it in the realm of fine art.

Therefore, amid raging construction in every quarter of the city, a question we might pose this autumn is: How many of these emerging structures even approach being worthy of a second look architecturally? I suggest two new mixed-use projects on the cityscape qualify. They can be found in the 400 and 500 blocks of Hull Street, in the former industrial neighborhood just beyond the Mayo Bridge.

The Current at 424 Hull St., designed by Hickok Cole architects of Washington, and City View, across the street, designed by 3North architects, a Richmond firm, stand out as architecturally superior to most of what is going up around town. Lynx Ventures and Thalhimer Realty Partners are the respective developers.

The Current is a complex that occupies the entire city block bounded by Hull, Fourth, Fifth and Decatur streets. Previously, it was mostly a surface parking lot that served the nearby Plant Zero and ArtWorks centers. In contrast to the underforgiving impenetrability of the plethora of century-old brick warehouses, many now restored and adapted for apartments and offices, the six-floor office structure is a welcoming and light-filled box of large glass windows with handsome aluminum framing. The apartment component that wraps the office building is faced largely in red brick, connecting it visually and historically to the neighborhood. The 215 apartments should be ready for occupancy in a few weeks. Come winter, both buildings will be linked at the street level by an indoor food hall – designed by Fultz & Singh architects of Richmond – that along with adjacent outdoor dining areas is designed to attract and hold foot traffic. Commissioned art will be installed in the entrance lobbies to the office and residential buildings.

Five years ago, when John Gregory was initiating the project with his Lynx Ventures real estate development associates, Rick Gregory, his father, and Bernard Harkless, the trio was omnipresent in the neighborhood. Gregory attended numerous individual, civic meetings and planning board presentations. He was often seen listening, taking notes, absorbing various opinions, sifting ideas and sharing hopes for the community. Often, those meetings lasted into the night.

“The Current project didn’t spring from aiming toward an apartment count or a square-footage count,” he said recently, while showing a visitor large and soon-to-be-installed artworks. “[In the planning and design process] we were aiming for a time, and for a specific place in time, and to express some points in time.”

That time seems to be not an architectural rehash of milquetoast architectural elements, but a solid and fresh statement of contemporaneity. The Current office building takes cues from a worthy scion of an elegant midcentury modernist landmark on Manhattan’s Park Avenue, the former Pepsi Cola Building. The 11-story building was completed in 1960 and designed by Gordon Bunshaft and Natalie DuBois of Skidmore, Owings & Merrill; Bunshaft and the firm designed another South Side Richmond landmark, the Philip Morris manufacturing plant on Interstate 95. 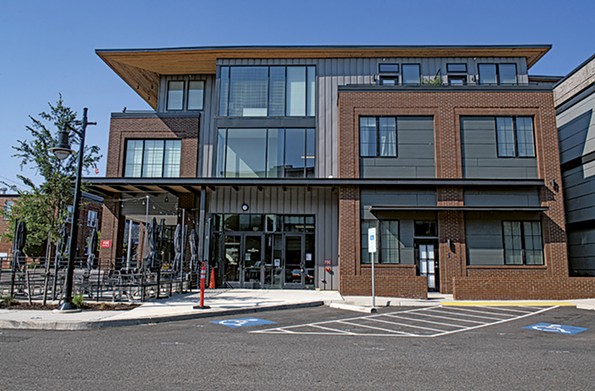 The second architecturally special new project is City View, a sprawling mixed-use complex of handsomely restored former warehouse buildings and human-scaled, residential in-fill on the opposite side of Hull Street from the Current. Late last month it added retail and restaurants to its mix. These are a branch of Stella’s, a local Greek gourmet and takeout institution, and an adjacent restaurant the Continental Manchester. The latter brings a name long synonymous with the Westhampton neighborhood across the river. The architects at 3North have not only exhibited a deft, light touch with their choice of materials, a distinctive brownish-hued brick and a pleasing cantilevered roof in strategic places, but interwoven outdoor living and public dining spaces, decks and terraces that are an integral part of the design.

This fall and early winter, the completion of these two architecturally grand projects should add significantly to the generation of additional energy in Manchester. As Current developer John Gregory puts it: “24/7.” But this doesn’t mean that he will be out and about after hours attending as many civic and community functions as he did during the planning phase.

“My wife and I have had three children during the past five years,” he says with a laugh, “I’ll be attending daytime meetings.” 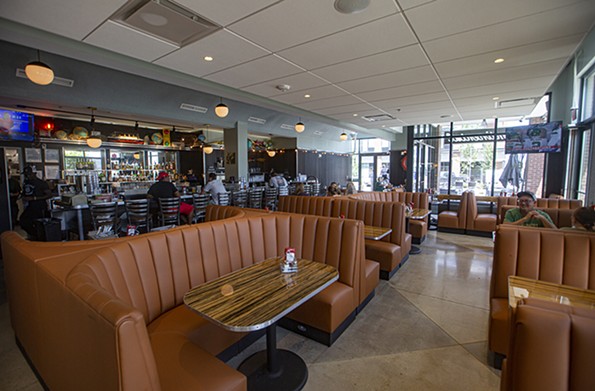