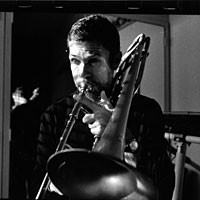 Given that this is only the second RVA JazzFest, it may be too early to talk about tradition. Nevertheless, the 2010 lineup (slated to perform Saturday at the Camel) hews closely to the pattern carved out in last year's festival debut: three estimable local bands, the last augmented by a nationally known player. Last year it was slide trumpeter Steve Bernstein sitting in with Fight the Big Bull. Cutting-edge saxophonist Tim Berne, playing with Ombak, was scheduled to be this year's ringer. But a last-minute family emergency forced Berne to cancel and fly to England.

It's a fortuitous choice. Hooten acknowledges that adding a second trombone to Ombak's trombone/guitar/bass/drums lineup wasn't something he'd considered -- complementing the sound with a sax player like Berne was a far more conventional choice. But doubled or even tripled trombones are integral to the sound of several local bands, including Fight the Big Bull, the No BS Brass Band and RVAJazzFest opener Trio of Justice.

Anderson brings a whole new dimension to the mix, blending uninhibited, humorous exuberance with serious technique. A fine vocalist, he's a master of multi-phonics -- singing into the single-note trombone at the same he's playing to produce complex harmonies. An accomplished educator (he leads the Jazz Studies program at SUNY Stony Brook) it's no overstatement that Anderson's iconoclastic approach inspires a generation of younger players.

Hooten, for one. “He was one of the first trombone players I listened to as a young player,” Hooten says. “I was a freshman when my high-school band director gave me one of his CDs. I still have it. I've always been kind of bummed I didn't get here in time for [Anderson's] VCU appearance.” Judging by the buzz that lingers among the students who were there, that 2003 visit was one of VCU jazz program's most memorable. “This will be a chance to recreate the magic,” Hooten says. “And to up the ante.”