How four classical artists are keeping music alive during the pandemic.

Scott Elmquist Violinist Ellen Cockerham Riccio started the series, “A Violinist in Your Backyard,” to home-deliver solo concerts during the pandemic. She was hired for as many as 15 shows a week during the summer, she says.

Friday night at the Carpenter Theatre, the seats are mostly empty, the patrons spread out in widely separated pairs.

The 13 masked players performing the original ballet arrangement of Aaron Copeland’s “Appalachian Spring” fill a stage that easily can accommodate a full orchestra and chorus 10 times as large. But when the group reaches the climactic Shaker hymn, “Simple Gifts,” the effect is as powerful and moving as it is with a broader sonic palette.

The challenge is not simple, but this is not classical music’s first pandemic. There are plainsong references to the plague documented half a millennium ago and the roots go back centuries further. The public face of the Richmond Symphony response is in the social-distancing discipline, reduced seating, masks required, post-performance exit called by row, like airline seating. The offstage is equally transformed. Players have dedicated tables to unpack their instruments. The mazelike routes through the extensive back of the house are all one-way, with bright directional arrows taped to the floor.

Everyone must find a way to navigate the viral transformation. And if the impact on large-scale performances is most obvious, the experiences of leading women artists in Richmond show the continuing resilience of the form.

The pandemic is revitalizing an art form long locked in revered tradition.

Violinist Ellen Cockerham Riccio is a socially distant soloist for hire. Naima Burrs, a Virginia State University professor and Catholic University doctoral candidate, is uncovering new ways to engage students. The Richmond Symphony’s artistic director, Jennifer Arnold, is finding ways to unleash compelling and diverse performances from previous restraints. And Erin Freeman, who holds a joint position as choral director with the orchestra and Virginia Commonwealth University, may be the hardest hit of all by the pandemic, but she’s finding an unyielding core of support at the heart of the music.

For Riccio, the symphony’s principal second violinist, taking a traditional music walkabout is nothing new. She founded the local chapter of Classical Revolutions, whose events slipped acoustic chamber and larger ensembles into venues more accustomed to electric guitars and saxophones. With the Rosette String Quartet, she accompanied Miramar and Bio Ritmo – where she met her husband, timbales player Giustino Riccio. She has frequently collaborated both live and in the studio with Spacebomb Records’ string visionary Trey Pollard.

Then the musical activity came to a halt in 2020.

“The symphony canceled the concerts on March 13,” Riccio says, noting it then canceled the Menuhin International Competition for Young Violinists in May. “I usually play at the Wintergreen Festival in July. That was canceled as well. It became clear that I was not going to play for anyone for six months unless I took matters into my own hands.”

Riccio says the symphony has been amazing and never stopped paying the full-time musicians. “But a lot of us supplement our income with other kinds of work. That evaporated. I needed to quickly figure out a way to stay afloat.”

Her answer is “A Violinist in Your Backyard,” a home-delivered live performance, often in a backyard setting. “I tailor each experience to the audience,” Riccio says. “I could do educational programs for parents with kids stuck at home. Or romantic background music for a special date night, or classical works by Bach and Beethoven.” She also takes requests.

It was a snowballing word-of-mouth success. Within 48 hours of announcing the idea, Riccio had her first booking – from someone she had never met.

“I thought it would just be a few friends or symphony fans that would take me up on it. [Over the summer] I did 120 concerts. I was really busy in May and June, as many as four 45-minute concerts in a day, as many as 15 a week. It actually wasn’t that much playing compared to what I did in the symphony.”

Riccio started with some broad, light-to-serious categories, but requests went in some unexpected directions.

“One family requested specifically melancholy and odd tunes,” she recalls. “I had to come up with a special program for that. I do all kinds of music to make it special to people, from the Beatles to Barbara Streisand, to ‘Rocky Top.’ But normally people kind of leave it up to me. Which means they get to hear music they’ve never heard and end up loving it.”

For fellow violinist Naima Burrs, interactions have shifted to cyberspace and the world feels weirdly busier.

A full-time professor at Virginia State University, Burrs is also working on her doctorate in conducting at Catholic University of America. Everything she does – classes, seminars, individual lessons – is on the computer. “It’s more work, but there is a bright side in getting to continue. I am optimistic about that,” she says. 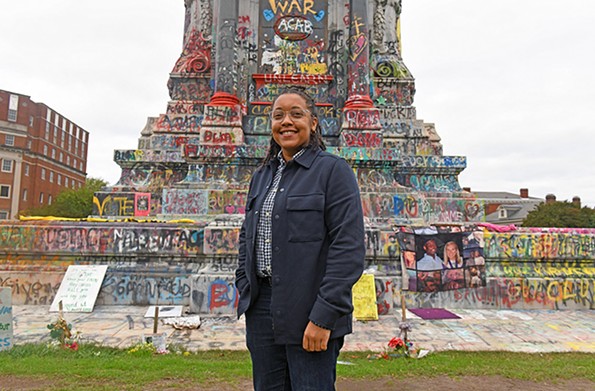 Her challenges range from helping performing musicians prepare for auditions to working with education students whose prior experience and long-term goals are much more tactical. The joys of ensemble playing are on hold. But as the loss of one sense sharpens the others, the restrictions have also opened the window to broader possibilities.

“I didn’t realize how accessible so many things are, how easy it is to connect with famous musicians and conductors around the country,” she says. “Everyone is becoming so creative about helping people learn and have a positive experience. That’s one positive we can take away from this odd time.”

There are still some opportunities to play. Burrs led a memorable midsummer string ensemble at the Violin Vigil at Lee Circle aka Marcus-David Peters Circle, in a performance of Pulitzer Prize-winning Black composer George Walker’s “Lyric for Strings.” Her brother, Morgan Burrs, was playing with Butcher Brown on the other side of the statue.

“It was an interesting tribute to the African American contribution to music. Classical on this side, jazz and funk on the other.”

Jennifer Arnold organized the Vigil. The new artistic planning and operations director of the symphony arrived as it was shutting down, and as the racial-justice movement was gaining momentum. She took the position after 15 years with the Oregon Symphony, the final on sabbatical as a diversity fellow for the Sphinx Institute, a nonprofit dedicated to supporting Black and Latino classical musicians. 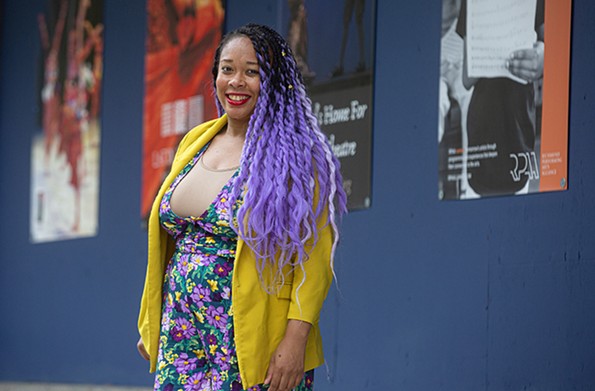 “I was a viola performance major at the Cleveland Institute of Music,” Arnold says. “But I always knew that [as a player] I was not a lifer. I have been working for diversity in the arts for a long time.”

That dedication shapes many of the Richmond Symphony's current programs. The opening concert at Maymont was built around the experience of Black workers on the estate during the Jim Crow years. The next show featured jazz pianist Aaron Diehl and groundbreaking works by African American composers, including Old Dominion University professor Adolphus Hailstork and Leonard Bernstein Award recipient Jessie Montgomery. Guest artists at the season’s first Pops concert were Richmond bolero ensemble Miramar. Classic composers such as Beethoven, Gershwin and Copland still show up, but they are part of a more multicultural mix.

“It’s not just about playing music,” Arnold explains. “It has to be meaningful. It has to be genuine. And it has to pertain to the community.”

And it must be safe, of course.

“Choruses are a dangerous sport right now,” says choral director Erin Freeman. “They stand close together for up to two and a half hours, produce more aerosols, breathe more deeply, often in an old space with no ventilation. But we cannot stop. Souls require music. If we are going to keep up our skills and come out on the other side, we need to keep looking forward.” 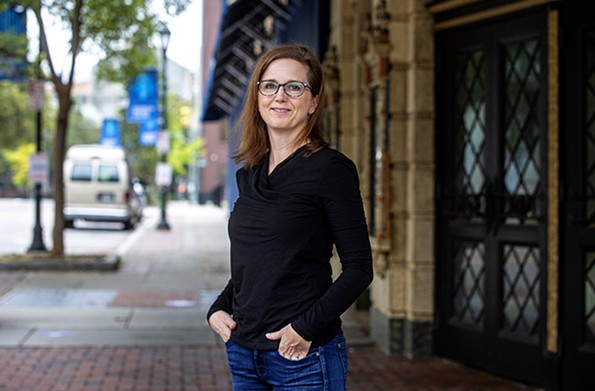 Science is key. At Virginia Commonwealth University for Freeman’s four choruses, the formula is based on air-exchange studies of the existing spaces, which is roughly 30 minutes on, 30 minutes off for the increasingly hazardous air to be cleared. She wears a wireless microphone with a sound system to be heard by more distant participants. Classes are recorded for asynchronous participation by anyone with potential symptoms or with child care issues. “Even then, we are incredibly cautious,” she notes. “We’re still singing with our masks on.”

With every vocal performance canceled, 2020 is shaping up as something of a lost year – not an unusual observation for most of us. The cancellation of the Richmond Ballet holiday classic, “The Nutcracker,” hit incredibly hard. “This is my first December not making music since I joined the children’s choir at 7,” Freeman notes.

The Richmond Symphony Chorus still rehearses, with upwards of 125 singers, every Tuesday night via Zoom.

“If we are going to sound any good on the other side of this, we have to keep up our voices and our skills.” The group is working on a set of repertoire, some for recording, others for potential small group caroling over the holidays.

VCU students are studying the vocal music of the Middle Ages. Of note is “Stela Celli.” “It’s a chant written by a group of nuns in Portugal about the [bubonic] plague,” Freeman says. It is a haunting reminder of the distant past. “They have never heard harmonies like this before. They were sort of shocked, and someone said ‘Gosh, that’s so creepy sounding.’” That led to a discussion of the Paris catacombs and plague music parties, a cultural nexus of sophisticated secular composition.
It’s worth remembering that age ended, as will this one.

And while it lasts, artists adjust and emerge subtly changed. They may find new ways to perform or new ways to teach. New ways to bring forward the vital voices of the underserved.

Or to find deep connections with the past while looking to the future.