Virginia Opera battens down the hatches for the comic operetta “The Pirates of Penzance.” 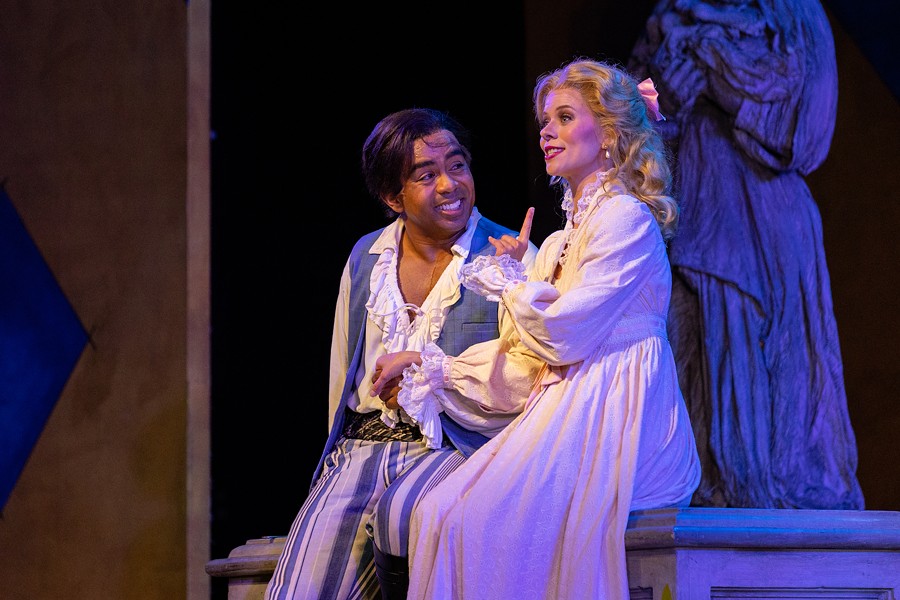 Dave Pearson Photography Martin Bakari as Frederic and Amy Owens as Mabel in Virginia Opera’s “The Pirates of Penzance,” which plays Nov. 18 and 20 at the Dominion Energy Center for the Performing Arts.

Audience participation isn’t always the norm at the opera, but “The Pirates of Penzance” isn’t like most operas. During the opening weekend of the Virginia Opera’s production earlier this month in Norfolk, a child in the audience shouted “I love you!” to the pirates assembled on stage just before the opening number.

“It felt more like a rock concert than an opera,” recalls Aubrey Allicock, who plays the Pirate King in the production coming to the Dominion Energy Center on Nov. 18 and 20. “The audience is a part of the show.”

Penned in the late-1870s by British composer Arthur Sullivan and librettist W.S. Gilbert, “Pirates” tells the story of Frederic, a 20-year-old apprenticing with a band of pirates. Frederic’s father intended him to apprentice with a ship’s “pilot,” but Frederic’s nursemaid misheard, and Frederic’s been swabbing poop decks ever since.

Frederic believes he’ll soon complete his apprenticeship and move on with his life when it’s revealed to him that his indenture is until his 21st birthday. As Frederic was born on Feb. 29 of a leap year, he must serve another 63 years with the pirates. Meanwhile, the tender-hearted pirates keep capturing people but letting them go after their captives inform them that they are orphans. The pirates are all orphans, and it’s an open secret that if anyone captured by them says that they themselves are orphans, the sympathetic pirates will free them.

Adam Turner, Virginia Opera’s artistic director, says the show flies in the face of what most people think of when they think of opera.

“So much of opera is considered serious and longwinded and tragic,” says Turner, who serves as conductor for the show. “‘Pirates of Penzance’ is just a really fun evening at the theater. There’s no tragedy. It’s all satire, all comedy.”

With his production’s embrace of physical humor, director Kyle Lang says the show has a lot in common with old-school sitcoms.

“I treated it like I’m staging an episode of ‘I Love Lucy,’” says Lang. “Physical comedy has a lot to do with the plot, and for me the physical comedy is written into the music. Everything I staged was in response to the music.”

Allicock lauds Lang’s use of humor and dance in the operetta.

“He’s choreographed such a wonderful show,” he says. “There’s going to be a lot of dancing while we’re singing, which a lot of opera singers are not used to. It’s very much a musical style, Broadway show-type of dancing.”

Before his big aria, Allicock’s character gets into a swordfight with Frederic.

“That’s the fun part for me, because it’s not a ‘park and bark’ opera where you’re just standing still and singing an opera,” Allicock says, adding that he based his performance on Capt. Jack Sparrow from the “Pirates of the Caribbean” franchise. “I kind of take a Johnny Depp[-type] character on him, his walk and his mannerisms, because Johnny Depp is the best.”

Turner says the show is structured “like a fast-paced movie,” and chock-full of catchy tunes.

“You can’t walk away from a production of ‘Pirates of Penzance’ without an earworm,” he says. “You’ll just be whistling these tunes and thinking about these lyrics for days and days, as I have. I can’t sleep at night because I have these things rolling around in my head all the time.”

The show’s best-known number is “I Am the Very Model of a Major-General,” a patter song that’s had a wild life outside of the operetta, appearing either in earnest or in parody in “The Muppet Show,” “Family Guy,” “Frasier,” “The Simpsons,” “Star Trek” and other places.

“You’ve heard this before and you may not know where it’s from, so you really want to come and experience this in person,” Turner says.

Clocking in at just over two hours, Lang says “Pirates” is the diversion from reality we all need these days.

“It’s a very fun escape from our world,” he says. “It’s very nice to sit in a theater for two hours and get away from everything.”