Players from the viral documentary “Landfill Harmonic,” about recycled music instruments, come to the Steward School 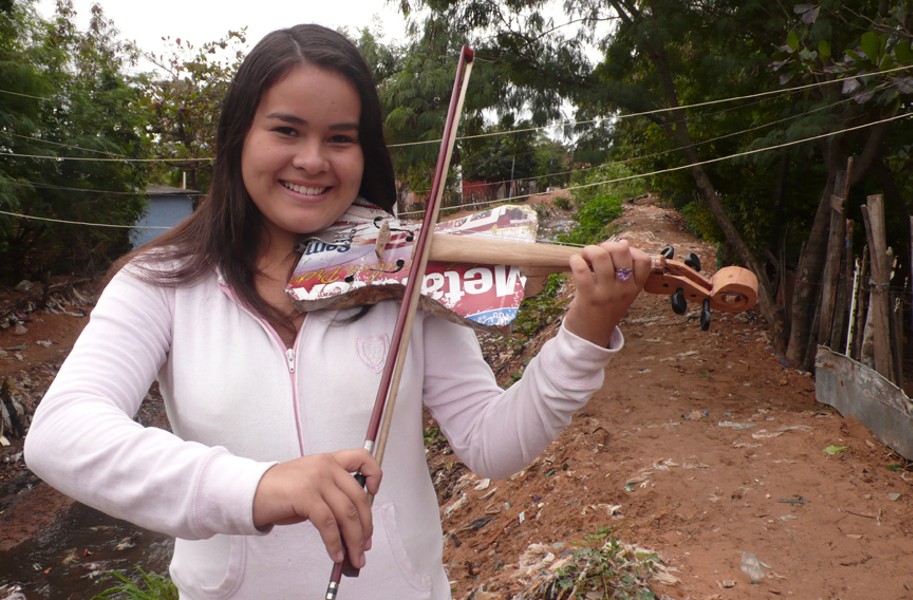 Orquesta de Reciclados Cateura, roughly translated as the "recycled orchestra" in Spanish, is a real-world post-apocalyptic musical ensemble — a youth orchestra playing instruments hand-crafted from bits picked from the vast garbage hill on the outskirts of Asuncion, Paraguay.

The story of its inspiring emergence from one of the most dead-end wastelands imaginable is captured in the award-winning documentary, "Landfill Harmonic." The organizer, and some of the players, will appear at the Steward School on Wednesday, Nov. 14, for a talk, performance and music fair.
It is worth seeing this immensely moving film, available on Amazon, Apple and Vi
meo, which follows the unlikely founder of the band, Favio Chavez, and a handful of young musicians for several years as the band forms and grows in fame to appearances in classical concert halls and rock 'n' roll stadiums around the world. Spoiler alert: In one of the film's most heartwarming twists, members of the intimidatingly named Megadeath turn out to be totally lovable softies.

Chavez is one of the key speakers at the Steward School event. He came to the dump side town of Cateura as an environmental engineer with a program to help the garbage pickers improve their yield. He stayed as a teacher as his musical side project became his mission. Also coming is violinist Ada Rios, whose story is the central plot of the film. It was her father's love for heavy metal, nurtured by tapes rescued from the garbage that inspired the Megadeath connection.

The film's producer, Juliana Penaranda-Loftus is also taking part. Born in Colombia, she began her career working on her home country's prime-time TV shows. She came to the U.S. to get her master's degree in film and video from American University. She came upon the story of the orchestra in late 2008.

"I was looking for a story that would inspire, entertain and make social change," she says. "I fell in love with Favio and the kids." It was the start of a five-year process, returning frequently to dig deeper, show how things changed over time. "We needed kids who were just starting. You don't learn to play violin in a month. You don't get good enough to be recognized in a year."
The project got intense when a teaser from the work in progress was released and went viral on You Tube. A part-time project became a full-time job. "The project got much bigger," Penaranda-Loftus says. "As a producer you have to spend so much time fundraising,"

The project has grown beyond the film. In addition, there is "Ada's Violin," a beautifully illustrated children's book about the group, and detailed curricula with lessons and activities for secondary and elementary school use. It is all part of a sustainable vision in which a rotating lineup of the best musicians goes on tour and older players teach the younger ones. It's transformed the mentality of a town that once subsisted on scraps from richer people's waste. The orchestra is a source of pride and a vehicle for escape. "The world sends us garbage," Chavez says. "We send back music."

They will be the first musicians to take part in the Bryan Innovation Lab's visiting innovator program, which has previously played host to participants including Tibetan monks and ice-cream-maker Ben and Jerry's public relations director. The 6-year-old, 6,300-square-foot lab is designed as an interdisciplinary maker space, a hands-on mashup of art, history, science, cooking and other things into an integrated educational experience.

"We are approaching learning from different angles," says its director, Cary Jamieson. "The Makers Fair is open to everyone. We are passionate about sharing."

There may not be time to construct the equal of the lovingly crafted instruments of Cateura. It takes time to hammer a violin from tin cans, mount a wooden neck carved from a discarded bed headboard, and string it to tuning pegs made of wooden spoons and metal spigots. Or make a drum from a still-readable hospital X-ray. But it is a chance to share the experience with people who have literally transformed trash into treasure -- the band's instruments are singular enough to have earned an exhibit in the Phoenix Musical Instrument Museum. And it is fitting that we, who are so adept at reducing a wealth of resources to mountains of refuse, owe our respect to those who accomplish the opposite.

Favio Chavez and Juliana Penaranda-Loftus will lead a talk and discussion at the Lora N. Robins Theatre in the Cramer Center for the Arts on Nov. 14 from 8:15 to 9 a.m. and the community is invited to create musical instruments at the Musical Maker Fair from 3:15 to 4:30 p.m. stewardschool.org.