"Blue Jasmine" is worthwhile if familiar from the longtime director. 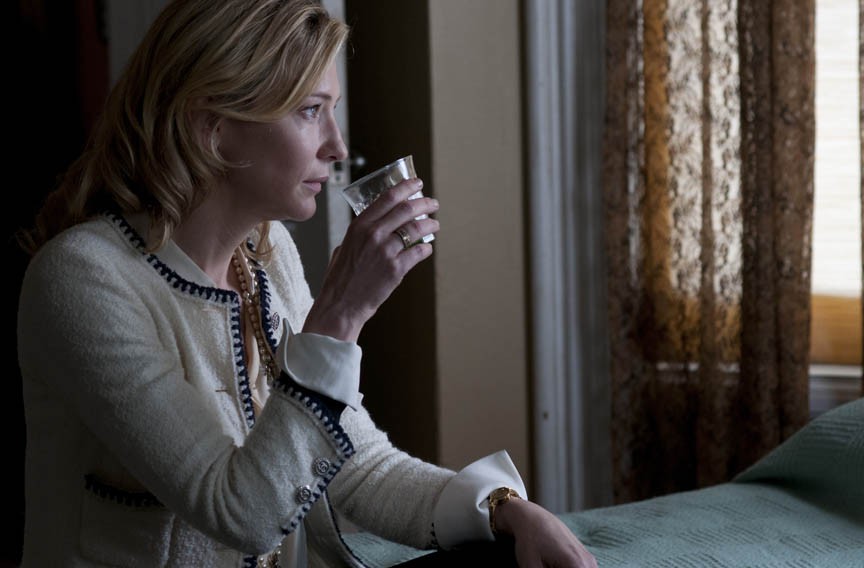 Woody Allen's 2012 "To Rome With Love" was so glaringly lazy it shone a disparaging light on his other recent work. A pattern began to emerge. Was Allen using his clout as a filmmaker to turn his projects into lavish vacations with beautiful starlets? I would, but I also wouldn't be surprised if people stopped coming to my movies.

The backlash against "To Rome" might be one reason Allen returned to the United States for "Blue Jasmine," set in San Francisco and New York. It's also a weightier film, grounded by an especially gratifying, Oscar-worthy performance by Cate Blanchett as a formerly wealthy financier's wife who's fallen on hard times.

Blanchett arrives on screen after the opening credits as Jasmine, a lost 40-something who until recently was one of the most popular society women in Manhattan. She's been reduced to moving in with her sister, Ginger (Sally Hawkins, excellent though secondary), who lives in a quaint, homey and, to Jasmine, squalid two-bedroom apartment in San Francisco.

Jasmine is desperate, however, her only belongings what she's able to carry. The government confiscated most of her possessions after her husband, Hal (Alec Baldwin), a vulgarly rich Bernie Madoff type, was convicted of fraud. Jasmine, we learn through conversation and flashback, tried to make it on her own for a time, but was found one day talking to herself on a park bench, and now wants to start over completely on the other side of the continent.

Being a Woody Allen character, her strategy is convoluted, to put it mildly. She's been pampered for so long, she isn't very employable, her only work experience being the figurehead of various charities. On a whim she decides to be an interior designer, and to study online because she can't afford college tuition. But she doesn't know computers, so she has to get a job as a dental receptionist to afford the class on computers that will show her how to take the online courses on interior design.

It's utter folly, the effort leading her into the octopus arms of her employer (Michael Stuhlbarg), and more and more frequently into the past, haunted by memories of a life where riches and self-deception were synonymous. Some of those memories are quite ambiguous. Did she destroy her sister's marriage and future by helping to convince Ginger's former husband (Andrew Dice Clay as a slightly buffoonish handyman) to invest in one of Hal's schemes? Or were they all victims of a selfish, deceptive man? In the present she also must deal with her sister and her new boyfriend, Chili (Bobby Cannavale), a mechanic Jasmine treats with an open disdain that would be embarrassing for a person in her situation if it weren't so humorously brazen.

Allen handles this latticework of intersecting characters, stories and time with the expected mastery of an artist who makes at least a film a year. But what makes it more than a few interesting slices of life is the insistence on accident and happenstance as the defining ingredients of life. Anyone who's followed Allen's career since "Match Point" will recognize the theme here, that life is almost entirely, comically random and ruled by incomprehensible chance.

Both women have their lives changed at a random party they hesitantly attend, reminding us of Allen's famous dictum that "90 percent of life is just showing up." But Allen seems to want to emphasize that axiom as a neutral assessment. When you show up there are results, but no guarantee they turn out well.

Jasmine meets a handsome stranger (Peter Sarsgaard) at the party who seems to be the answer to her woes. He could be, but as we see in the slowly unwinding conclusion, chance isn't always beneficent. It giveth and it taketh away.

In comparison to his last outing, "Blue Jasmine" seems like a masterpiece. It is not that, but it's a fine story owing much to Blanchett, who must sustain a character at turns disoriented and single-minded, humbled and arrogant, frightened and imperious. Her character is difficult to fathom, but the film's final sequence is revelatory. We learn that Jasmine has done more than just show up. She's willfully meddled with the flow of life. It's anyone's guess what would have happened had she simply done nothing. In a Woody Allen film you kind of know what to expect, but at the same time anything is possible, and that's what keeps us coming back. (PG-13) 98 min. S