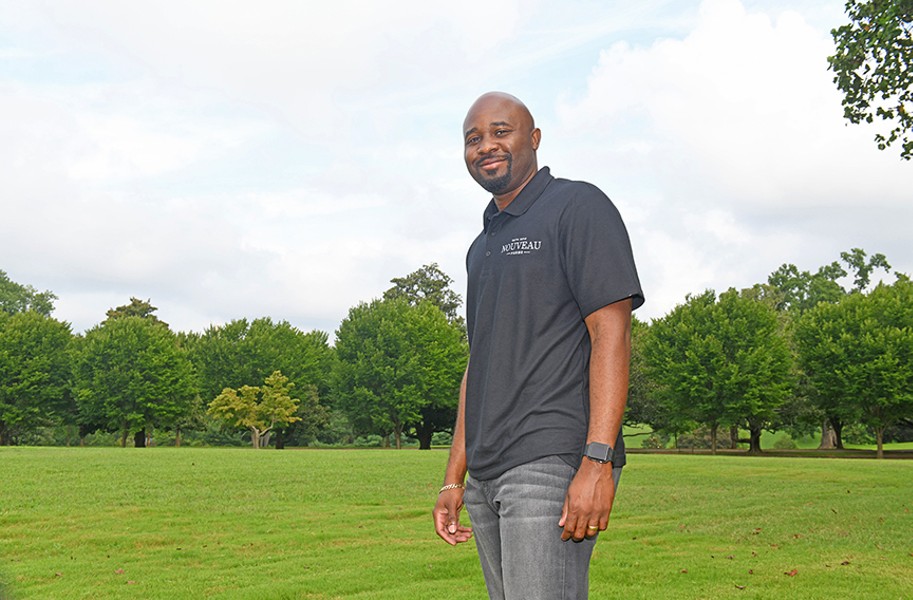 While most farmers fight daily against the peccadilloes of ever-abrasive Mother Nature, Trevor Ferguson battles only market demands and water flow inside his hydroponic urban farm.

In 2016, Ferguson started his tech-driven farming business Nouveau Farms in the quiet of his basement. An engineer by day, Ferguson says he began researching how to grow his own food after he realized that imported, out-of-season produce was not what he wanted to feed his family.

Once the left-brained Ferguson started learning about hydroponics, he was hooked. For those unfamiliar with the ’ponic world, this type of horticulture forgoes soil and instead uses mineral nutrient solutions, light, oxygen and filtered, fresh water to grow plants as much as 50% faster than those grown in the great outdoors.

“When you start eating those greens and those herbs, you can taste the difference,” Ferguson says. “It sort of changed my whole perspective.”

Ferguson started with an eight-tower wall garden, growing microgreens, salad greens and herbs like mint, chive and basil. “I’m originally from the Bahamas and we had fruit trees in the backyard,” Ferguson says. “I would go and get mangoes right off the tree, so that’s where that connection comes from.”

While still working his 9 to 5 as a natural gas infrastructure development manager, Ferguson carved out time for hydroponic training courses, moving his small underground operation into his garage. He started the commercial rollout of Nouveau Farms in January. As of Tuesday Sept. 1, you can order your microgreens and mint directly from Ferguson’s 800-square-foot Hull Street indoor farm.

“I surely hope this turns into a full-time thing,” Ferguson says. “I am building this for the long run, making long-term investments. People who go into farming know it isn’t to get rich quick, I won’t become a millionaire.”

Ferguson says when the business launched at the beginning of 2020, the goal was to provide major suppliers with bulk orders. “That sort of bottomed out for us.” Like the rest of the world operating during the pandemic, he readjusted his business model. And, a bit serendipitously, Ferguson says he likes this initial direct-to-consumer approach better.

“People have been so disconnected from their food for such a long time,” he says. “The pandemic has made people realize how important it is to have food security.” Ferguson wishes he were “further ahead” in his rollout plan, simply so he could meet the needs of the people in his community. “One of the things I’m hyper-focused on is that whatever we grow and supply, we need to be cost competitive.”

So while his salad greens will damn sure be more flavorful than the imported grocery store stuff that’s grown primarily for hardiness, Ferguson isn’t going to charge people an exorbitant price. “If you’re buying a bag of red romaine from me, it will be the same price as any place else,” he assures.

The Hull Street farm is currently catering to individual consumers, and pledges that all produce is harvested within 24 hours of delivery. Customers can place orders online (nouveaufarms.com) Sundays-Fridays, with free deliveries to those within 15 miles on Saturdays.

In addition to the Hull Street business, Ferguson also has his sights set on a truly halcyon, pastoral dream: a sprawling farmhouse located on 7 acres in Varina, situated amongst a vineyard, strawberry patches and a space allotted to weekend farmers markets.

Only seven minutes from Richmond’s city center, Nouveau Farms & Vineyard consists of three abutting lots, with the farmhouse to the far left, the middle lot devoted to grape-growing and the far lot serving as an active farm open to the public. A huge undertaking, yes, but Ferguson is ready for the challenge.

“The Varina farm is going to be strawberry heaven,” Ferguson laughs. He says that one impetus to grow his own food was to create the best berries for his daughter. “We would go to the grocery store and she loves strawberries and we would buy them on a weekly basis, but it was really hit or miss.”

The Nouveau Farms berries will all be hits, with Ferguson using “a bit of hydroponics” plus traditional farming methods to grow his fruits de terre. “We won’t be in the soil – we will use a hybrid version of soil with a mix of peat moss, plus good drainage. And we’ll be feeding nutrients straight to the berries.”

Ferguson says he will be experimenting with a couple different berry varieties, and will solicit help from the public to choose which berry is best — he’s hoping the farm will be able to institute weekend pick-your-own days for families, too.

By 2022, Ferguson plans to have weekend farmers markets in addition to events and weddings – the backdrop is a bridal dream. “We’ll have smoothies made of our fresh fruit, people can enjoy a glass of wine and play cornhole,” Ferguson muses.

He can see it now: a weekend reset on the farm before heading back into the city for the daily grind. Now all he needs are some mango trees.

Follow Nouveau Farms on Instagram for updates about produce, purchasing and when the farm will be ready for strawberry picking.