Plan Emerges for a Residential Tower on Grace Street 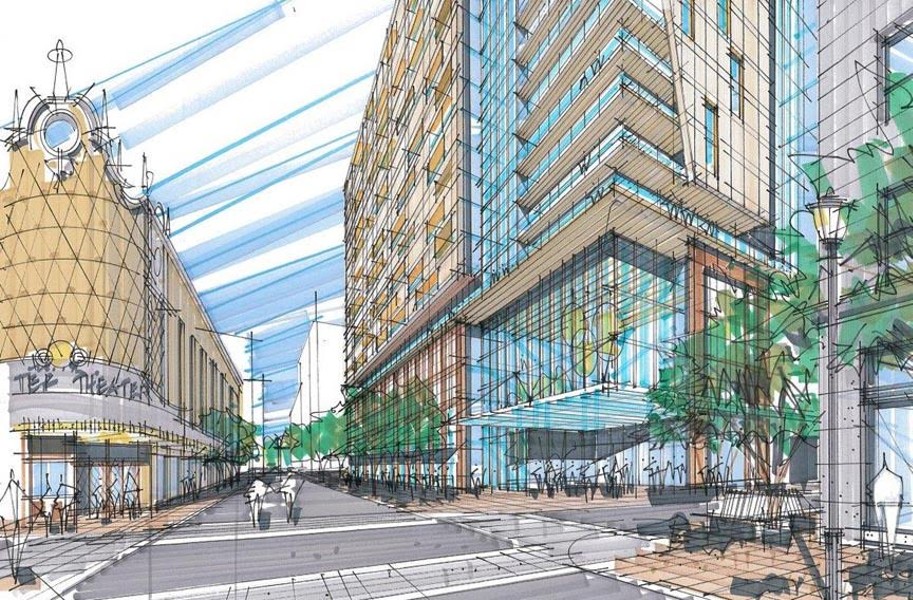 Price Studios Renderings of a new downtown development project south of Carpenter Theatre show options for one tower or two above a parking garage and ground-floor retail.

Developers have moved a step closer to their vision of reshaping the Grace Street corridor with a mixed-use development that could cost as much as $100 million.

The Richmond Planning Commission approved the sale of city-owned land across from the Carpenter Theatre, an L-shaped parcel encompassing most of the block between Grace, Franklin, North Sixth and North Seventh streets.

If City Council approves the plan Monday, the 1.6-acre site will be sold to City Center Development LLC for $3.95 million.

Requirements for the sale include providing at least 800 parking spaces, with 600 available to the public, 28,000 square feet of ground-level retail space and 372,000 square feet of residential or commercial space — or a combination.

The retail space will face Grace Street and North Sixth, and the parking deck will be the five stories above that — “screened in, in the contemporary fashion,” says Eric Saylor of Price Studios, the architect for the project.

The first phase of parking and retail must be completed within 20 months, and the second phase within five years. Residential use or such commercial projects as a hotel are still being considered. The project also could include one tower or two.

The final project must be taxable for at least $86 million, meaning the city could reap $1 million in property taxes.

“It’s a contemporary building,” says Robert P. Englander Jr. of CathFord Consulting. He touts outdoor accessibility of the planned residential spaces, “which we think is missing in the urban core today.”

An art deco-style parking garage built in 1927 is included in the plan. The executive director of Historic Richmond, Cyane Crump, supported maintaining the historic facade at the meeting Monday.

“We are sensitive to the nature of the building,” Englander says. “The facade is magnificent.”

The parking garage is scheduled to be removed, but Englander says developers are willing to maintain the facade, which will be incorporated into the new parking facility. A garden terrace also is planned for the roof of the parking deck.

Formed last year, City Center Development is a partnership of CathFord Consulting and Taylor & Parrish. They also collaborated on the Turning Basin building by the canal in Shockoe Slip in 2000. And the latter is working on the Main Street train shed project. The architect on the City Center project is Price Studios.

The land and improvements were assessed at $6.36 million in 2017, but Englander cites the “functional obsolescence” of the parking deck. Demolition costs account for the difference between value and sale price, Englander says.

Asked if they’re expecting resistance to the project, Englander says no: “But one never knows.”